Tweet
On Tuesday, 18 October 2022, the Hon. Rahm Emanuel, the U.S. Ambassador to Japan, visited Hongo Campus of the University of Tokyo and took part in a special talk event with President Fujii. In addition to President Fujii, the University of Tokyo was represented by Executive Vice President Kaori Hayashi (in charge of International Affairs and Diversity Promotion) and Vice President Yujin Yaguchi (in charge of Global Education Promotion).

This event was held as a part of the “When I was 19” series, a series of special talk events under the Go Global Gateway (GGG) program, in which people who play active roles globally in their profession are invited to share their stories from when they were around 19 years old and to talk about how they developed their careers in later life. On this occasion, 19 students participated in this event.

In her opening remarks, Executive Vice President Hayashi emphasized the significance of this event in learning how to act as a global citizen in the 21st century through direct dialogue and welcomed the Ambassador Emmanuel to Hongo Campus.

This was followed by Ambassador Emanuel’s self-introduction, in which he shared personal stories of his failures and setbacks that have been turning points in his life. He then encouraged the students who attended the event not to live their lives regretting things and using phrases such as “I would have”, “I could have” and “I should have”, but rather to challenge with determination. He also told them that even if we fail, we can learn from our failures and move forward. As President Fujii introduced himself afterward, he also talked about his academic career, in which he had experienced unexpected adversity and events that opened the way for challenges in a new academic field.

A 40-minute Q&A session was held after the self-introductions from Ambassador Emanuel and President Fujii. Many questions were posed by the participating students. Both Ambassador Emanuel and President Fujii answered a wide variety of questions on topics such as future career development, the importance of liberal arts education, and what students should keep in mind as global leaders of the next generation. Throughout the event, Ambassador Emanuel repeatedly mentioned the necessity of having dialogues between people from different backgrounds, and the event concluded with great success. 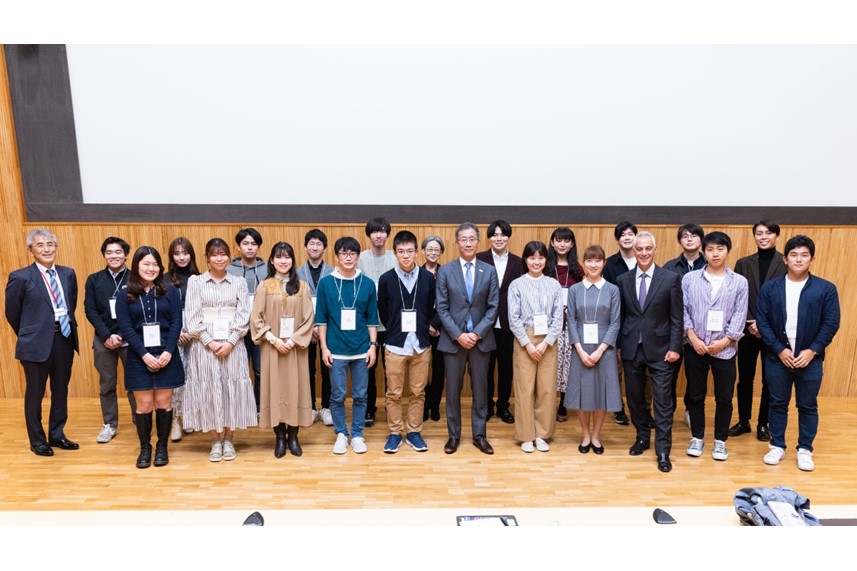