This series introduces University of Tokyo researchers studying diversity and inclusion from a variety of perspectives. 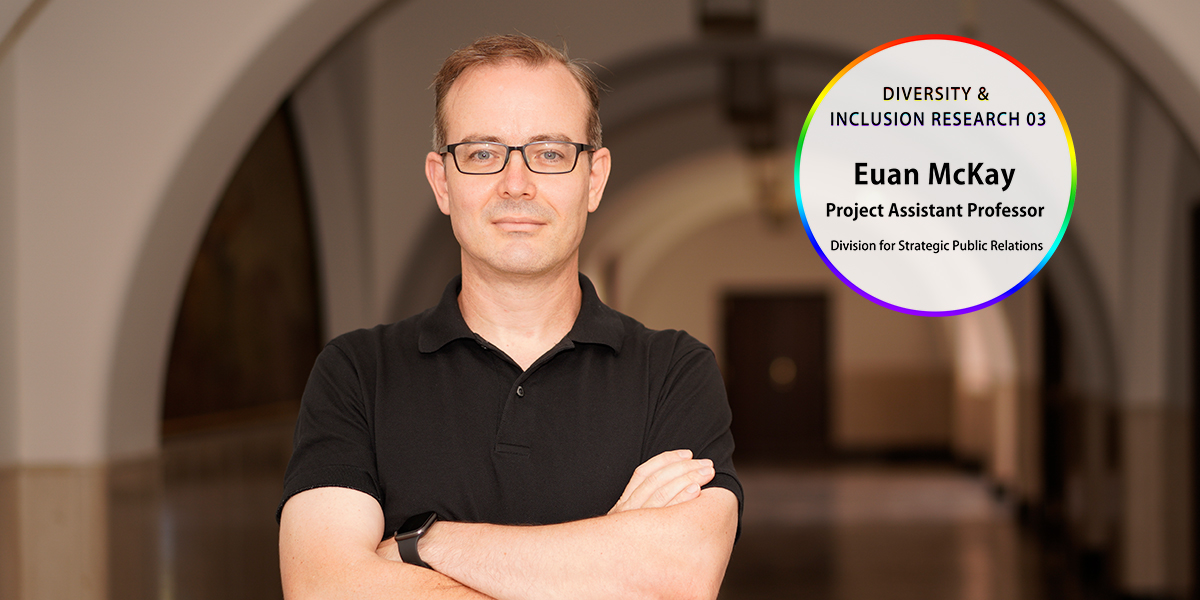 ―― What do you research?

I’m researching the climate for sexual minorities on university campuses.

Campus climate refers to the entire university campus we are in, including the physical space, the systems that people interact with, and whatever interactions they have with colleagues and peers and researchers. We are studying how undergraduate and graduate students experience university life and the challenges they face, particularly as sexual minority students. It includes a huge range of things, from physical harassment right down to just not knowing which office to go to when they want to consult about something. We are studying what kind of challenges people face and what kind of mechanisms people have for coping, then the sort of needs they have at the end that they can't deal with themselves. That's where the university needs to step in and makes sure to provide sufficient support.

There have been quite a few campus climate surveys done in Western and other countries, but there hasn't been any sort of large-scale, comprehensive study looking just at sexual minority students at Japanese universities.

――What led you to this research?

I started the LGBTQ+ Staff Association at the University of Tokyo in 2015 with two colleagues. The group has grown to about 20-30 members and includes people not just at UTokyo but other universities in the Kanto region (comprising Tokyo and surrounding prefectures). I have also worked with TOPIA, which is a sexual minority/LGBT and ally student group at UTokyo. So every year, I have helped them put up a booth at Tokyo Rainbow Pride (LGBTQ public event). Because of this, a group of three Ph.D. students came to me and said they are doing this campus climate research looking just at our university during their doctoral programs and want to expand it into a bigger project. So together we applied for KAKENHI (Grants-in-Aid for Scientific Research) funding and got it. We’ve also just applied now for funding for the next stage in the research, focusing on sexual minority faculty members.

―― Why did you decide to focus on university students?

Every stage of everybody's life is important, but there are guidelines from the ministry of education about providing support for sexual minority students (in secondary education). There's nothing binding at the national level for universities, so there's a bit of a gap in this legal requirement to provide support for students. I think it’s important that we find out exactly what they’re going through to inform public policy when those guidelines are eventually developed.

The other thing is that university, particularly for undergraduates, is a really important stage in their life. It’s a point where people often move out of the home for the first time, maybe living in a town or a city away from family. So it's a time when they've got a huge amount of freedom. And that allows them to explore aspects of their identity, including sexuality, which they haven't perhaps had the freedom to do at home. So the university is a time when they can really break away from that kind of constraint. Universities should be providing students with a supportive and safe environment where they can develop, not just providing academic learning but also providing this kind of perhaps more pastoral care.

Most universities provide general support, but often LGBT students have been left out. So I think it's really important that we find out the actual situation on campuses in Japan, so that we can point out things that universities need to do to look after their students properly.

Sometimes they are looking outside the university for communities. So for example, in Tokyo, they often go and look for communities in Shinjuku 2-chome, which is an area in Tokyo catering to sexual minorities, or they'll have communities that existed from before, but often they'll disengage from the campus as a kind of protective measure, because they don't want to be outed or found out. They don't feel that they can come out. Factors driving this include the fear that it will affect their grades, the fear that they will be penalized for this by faculty, and also the fear that their friends and acquaintances on campus won't accept them for who they are. We’re now testing those findings through a national survey as the second part of the study.

―― What kind of theory has been applied to your research?

One prominent model behind sexual minority and other minority research at the moment is the idea of minority stress. Minority people have some kind of unique experience that is different from the majority population. And that could be as a result of the particular form of harassment they experience for being a member of a sexual minority or ethnic minority. It's also chronic. It’s with them 24 hours a day, throughout their entire lives. It's not something they can control. If, for example, you are a non-East Asian person in Japan, you're constantly standing out as non-Japanese and that self-awareness will be with you all the time.

The other thing is that the minority is stigmatized in some way: social structures and social systems oppress the minority, as a result of their value systems clashing with the dominant value system. For example, in Japan, if you're gay or lesbian and you want to get married, you can't. Japan’s current social systems do not permit you to do that. At its simplest, minority stress theory is just saying that these unique, chronic, and socially based experiences cause chronic stress to the minority individual. That can lead to negative health outcomes, and research has shown that this includes problems with kidneys, liver and other areas, and can lead to negative mental health outcomes, such as depression, increased suicide risk and anxiety. It can also result in reduced performance. So one thing we're doing in our survey is looking at the impact of campus climate and experience on academic performance.

―― In 2015, a law school student at Hitotsubashi University in western Tokyo suffered a panic attack, fell from a university building and died. It followed him being outed by a male student whom he confessed having romantic feelings for. Have things changed since then?

Among researchers and practitioners, that's a well-known and a really, really sad incident. And I think it should have been a really strong wake-up call for everybody that something needs to be done. But to be perfectly honest, I'm not sure how much really has changed since then. Definitely supporting sexual minority students is on the agenda now more than it was, say 10 years ago. I think a big part of that, though, has been the drive for equality in terms of marriage and partnerships systems in Shibuya (ward in Tokyo) and other places. I don't know to what extent that's really been driven by the need for change within higher education, however.

This university (UTokyo) definitely takes sexual minority issues a lot more seriously than they did before; they provide counseling and support for sexual minority students or they include a bit of information about sexual minorities in the orientation for new students, but it's still very, very limited. I understand that UTokyo is preparing to put out a diversity statement, like some other Japanese universities. I think that’s a really good thing. Having a diversity statement, even if it's a really simple, boilerplate kind of thing, like “Yeah, we value everybody,” if it names sexual minorities, people with disabilities and others, then it can be very, very affirming. But words need to be tied to action.