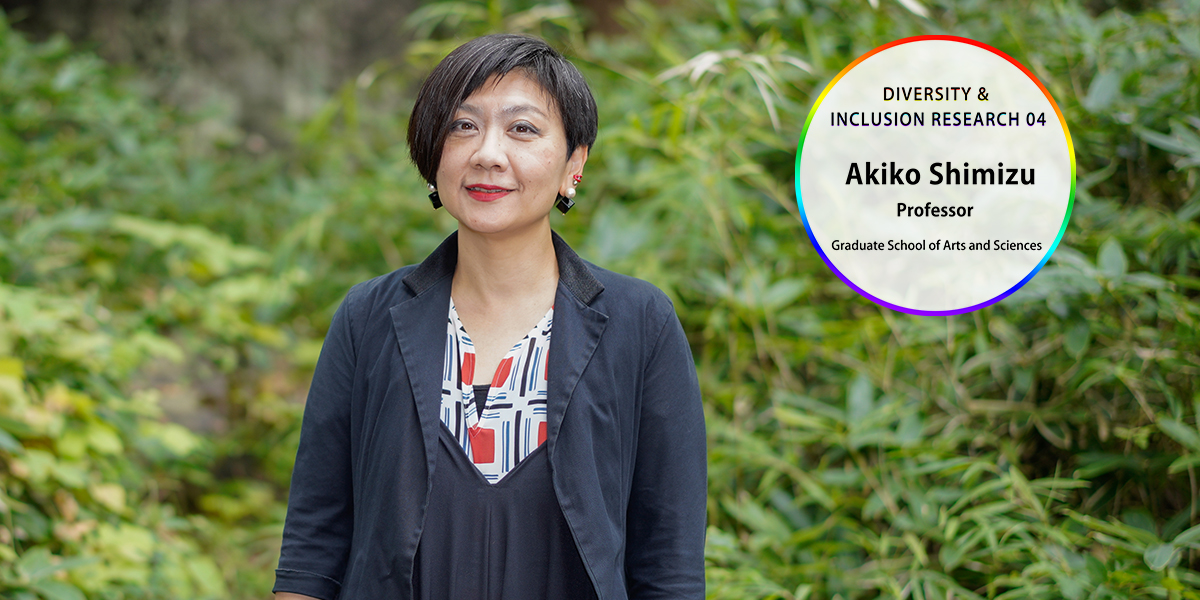 ―― You majored in English literature, concentrating on Shakespeare, as an undergraduate student at UTokyo. How did you get into studying feminism and gender?

When I was at university in the 1990s, in the field of English literature research, Shakespeare studies was among the areas that provided the most open atmosphere to talk about gender and sexuality. Especially in the Western, English-speaking countries, there were a lot of feminist Shakespeare scholars as well as renowned experts whose research covered both lesbian and gay studies and Shakespeare, and it was a genuinely interesting field. I was exposed to discussions and perspectives that I had never encountered before. From the very start when I was attracted to Shakespeare, there were aspects that aligned with discussions about gender and sexuality. I just didn't know how to describe their academic appeal, but as I read a lot of scholarly papers, the more I began to understand and I was drawn into it.

I wrote my undergraduate thesis on the Shakespearean comedy Twelfth Night. In Shakespeare's time, there were no actresses, so boy actors and adult male actors played male and female roles. In the play, the main character, a woman, disguises herself dressed as a man and helps the man she loves to court another woman. This other woman, who has no romantic feelings for him, instead falls in love with the main character, thinking that the protagonist is a man.

It’s a very interesting play because, while it’s a story about a man and a woman, it’s not a conventional love story. The woman disguised in men’s clothes adapts her behavior as people around her perceive her as a man, and this affects the dynamics of romantic love among the characters.

From there, I wanted to study the foundations of feminism, so I went to Cardiff University in the U.K. At Cardiff, a very famous feminist Shakespearean scholar, whom I had read extensively, was the director of the Centre for Critical and Cultural Theory, and I thought it was cool that a woman was the head of the organization. So I studied sexual politics and obtained my master’s degree and Ph.D. there.

―― What are your main research interests?

I've always been interested in the body. When I was in college, I had an eating disorder. Many people might seek a sociological or psychological approach, but my interest lay in a different place. The way your body is perceived by the people around you, and the way you feel about your body, or the way you want your body to be, do not usually match.

Especially in the case of women, certain social and cultural expectations about our bodies are very strong, and whether or not we conform to such demands can be a matter of survival — or we are often made to feel that way. So I'm very interested in how we strive to close that persistent gap between who we are and the ideal image we will never achieve but cannot live without aspiring to attain, by making adjustments in ways that would allow us to survive.

When I came back to Japan, however, the feminist movement in this country had started experiencing fierce backlash against it. I went to Britain to study without knowing anything about the situation surrounding feminism in Japan. While abroad, I decided that I was more interested in feminism than Shakespeare, so I switched my specialization to feminism and got a doctorate, and I came back thinking that I would delve into this field. Then I learned that conservative politicians in Japan at the time were starting to say that the word “gender” itself should not be used.

In Japan, feminist academics like Chizuko Ueno and Mari Osawa, both emeritus professors at UTokyo, achieved a lot in this field, but ultimately the impact did not reach the classroom in a big way. Although students might have a chance to get fragmentary knowledge about feminist and queer studies in Western, English-speaking countries, they tend to have few opportunities to learn the basics comprehensively, such as the underlying political and ideological trends and social backgrounds. So I started my career with a strong urge to teach students such basics. I thought teaching was perhaps more important than doing my research.

―― Do such basics cover the history of feminism in the world from its first wave in the late 19th century to early 20th century when women fought for suffrage, to the ongoing fourth wave, represented by the #MeToo movement?

Yes, they do. Some of the graduate students I supervise have studied very hard on their own, but just having one teacher or taking one class in university is not enough to grasp the whole picture. For 30 years since the time when I was a student, aspiring researchers have had no choice but to study mostly by themselves, from the time they are undergraduates, and to fend for themselves to launch their research career. That, I think, is a big problem. To help improve the situation, this academic year, we have increased the number of junior division (first- and second-year undergraduate) elective courses in gender and sexuality theory studies, from two to four.

In Japan, if you want to study feminism or queer studies (a field of study that examines diverse sexualities in relation to each other), there is very little you can absorb in your first or second year due to the lack of offerings. I think this is why it’s so difficult to conduct research that incorporates gender and diversity issues in Japan. You either specialize in this field or learn nothing at all. I think this is a shortcoming in Japan’s university education, and I hope to raise the standard of education, if only gradually.

With regard to diversity education, the university does not have a system where students are regularly taught about issues such as those surrounding people with disabilities, foreigners living in Japan, and ethnic minorities in Japan, though some researchers might happen to teach such classes independently.

We can have more people who receive a university education in diversity-related fields, and then go on to join civic and social movements. We can have more people who connect their university education with their own experiences to spread their cause. I don't think Japanese universities nurture enough of these people yet, and I feel there are few places in Japanese society where such talent can thrive. However, universities should not become part of a vicious cycle where it doesn’t do enough to nurture talent on grounds that there’s no place for them to be active. I think we should change that.

―― Is there anything that you keep in mind when you teach students?

In terms of gender and sexuality, the largest group of students at UTokyo probably consists of heterosexual, cisgender men (people whose male gender identity matches their assigned sex at birth). It's very important to address this group, but if that's all you do, minority students would always end up as the “topics” of discussion and not be part of the audience or the ones being addressed. So in my classes, I flip the perspective by establishing the minority students as the primary audience, and framing the discussion as, "Female/gay/transgender students experience things like this, but maybe male/heterosexual/cisgender ones don’t,” instead of, “Things are like this for male students, but things may be like that for female students.”

Also, I am always aware that there are likely queer and/or other minority students in the classroom, or someone very close to them, either as lovers, best friends or family members. Sometimes our knowledge as researchers may differ from what students know through their experience as individuals. I can talk about the academic insight accumulated over time on these topics and their historical background, but it is also possible that queer and/or minority students might know more about certain things. So I won’t purport I impart knowledge to them. Instead, I’d like to say, “There may be things you know more about than I do.”