Space engineer Jun Asakawa had always been a dedicated researcher, but he became totally immersed in studying the use of water as a “space fuel” after his involvement in a successful project to release a demonstration microsatellite from the International Space Station in 2019.

“When the microsatellite I helped develop lifted off, I was overcome with emotion. I’d never experienced that before,” said Asakawa, who participated in the project as a doctoral student and later a project assistant professor at the University of Tokyo. “After I felt the thrill of maneuvering the satellite in space (from the ground), I poured my heart and soul into my research.”

Now Asakawa is transferring this experience to a business venture with a mission to solve environmental problems in space, such as debris cleanup, and to use green energy harnessing water power. In April 2020, Asakawa became chief executive officer of Pale Blue Inc., a startup he established with two former doctorate colleagues in space engineering and an associate professor from UTokyo’s Graduate School of Frontier Sciences. They aim to develop microsatellite thrusters, or rocket engines, that use water — the ultimate form of green energy — as a propellant. Pale Blue is among just a handful of companies around the world developing such a thruster.

The company, based northeast of Tokyo in the city of Kashiwa, Chiba Prefecture, plans to conduct another demonstration in space in 2022 to pave the way for marketing the thrusters in 2025. In a joint project with Asakawa’s alma mater, Pale Blue is also conducting research on propulsion system technologies to send a probe to the moon. The company is setting its sights even farther still to develop thrusters for probes that will travel to planets in the solar system.

Born and raised in Kochi Prefecture, on the main island of Shikoku in southwestern Japan, Asakawa became intrigued by space as a boy due to the influence of his father, whose many interests included the worlds beyond our skies. Asakawa considered studying space engineering at high school, but it was only after he entered UTokyo, which has the Department of Aeronautics and Astronautics, that he decided to pursue the field in earnest.

When he was a first-year doctoral student, Asakawa’s supervisor, Associate Professor Hiroyuki Koizumi, suggested that he research a water-propelled thruster. “I jumped on this idea because it was really interesting,” Asakawa recalled.

Asakawa also joined a program called Entrepreneur Dojo, which has been run by UTokyo’s Division of University Corporate Relations since 2005, to study the nuts and bolts of entrepreneurship. “The program gave me many chances to talk with people from space-related startups, so I learned a lot about how startups operate,” Asakawa said, describing how the university supports enterprising aspirants interested in starting their own business venture. “I was able to connect with people outside the university by participating in a contest pitching business ideas. That was incredibly useful.”

The following year, Koizumi received a grant from the Program for Creating STart-ups from Advanced Research and Technology (START) sponsored by the Japan Science and Technology Agency (JST) to develop a water-based thruster. This grant motivated Asakawa to become an entrepreneur. “I felt my future career lay in starting a business after our lab received about 100 million yen from JST, and I got my fellow doctoral students involved,” he said. Koizumi joined Pale Blue as a founder and chief technology officer, while retaining his faculty post.

In the lead-up to its incorporation, Pale Blue received support from a UTokyo subsidy program called the GAP Fund, which helps to commercialize university research, and TODAI TLO, Ltd., an organization established in 1998 to serve as a bridge between the university’s inventions and companies, which helped procure an exclusive technology license.

It was also selected for a program that provides know-how on starting a business and access to UTokyo’s resources and subsidiary partner companies. The program, called 1st Round, is provided by the University of Tokyo Innovation Platform Co., Ltd. (UTokyo IPC), a wholly owned subsidiary established in 2016 by the university to strengthen its ability to jump-start business ventures. Within six months of its launch, Pale Blue had raised 140 million yen in investments and loans.

In recent years, major companies and startups alike have joined the market for microsatellites — small, lightweight satellites — which can be developed relatively quickly. In particular, plans to create microsatellite network “constellations” have been embraced as a promising way to solve a wide range of problems, such as cost, speed and coverage associated with communication. Developing advanced microsatellites, however, is more difficult. For example, large satellites have a thruster to move or adjust their orbit, but microsatellites normally have no room for a thruster.

In addition, propellants for large satellites conventionally contain hard-to-handle, toxic substances, which pose an environmental threat. “In this respect, water is absolutely ideal,” Asakawa said, adding that two rivals abroad are developing water-based thrusters. Pale Blue holds an edge over these competitors because it is developing a hybrid that combines a water resistojet (water vapor-type) thruster and a water ion (water plasma-type) thruster, he said. The former is capable of precisely adjusting a microsatellite’s orbit, while the latter generates powerful propulsion. Demonstration experiments for the water vapor type were completed with the JST program.

Since the Japan Aerospace Exploration Agency (JAXA) selected the hybrid type as a research theme for demonstration experiments in May 2020, Pale Blue has focused on developing this technology. Under the JAXA program, universities and private companies will conduct experiments to gauge the performance of their equipment, components or microsatellites in space using the agency’s RAPid Innovative payload demonstration Satellite 3 (RAPIS-3) to be launched in 2022.

The hybrid requires more components than the water vapor type, so Pale Blue must downsize each part. The company plans to hire several more specialists, each with expertise in a different field, to accelerate development with a 10-member team by the end of 2021.

The surge in microsatellite use has, unfortunately, resulted in a huge increase in debris and junk floating in space. To address this problem, Asakawa envisions a service using water-based thrusters to push space junk or spent satellites down into Earth’s atmosphere, where they would burn up. Also under consideration are missions to adjust satellite orbits and provide water as fuel to microsatellites by mobilizing a “gas station” microsatellite equipped with a water tank. “As I delved deeper and deeper into my research, I began to ponder how I could contribute more to society,” Asakawa said. “I now believe that progress in science and technology holds the key to making humankind happy.”

Pale Blue’s technology could be used in a project to send a probe to the moon. If it can supply water on the moon, where the presence of water has been confirmed, the probe could be directed to more distant targets such as other planets. “My dream goes beyond that,” Asakawa said. “For example, Saturn has a moon called Enceladus that contains water under its crust, and water vapor gushes out from the surface. I think sending a microsatellite to such a moon will be possible in the future.” The dream Asakawa entertained since his high school days seems to have no boundaries. 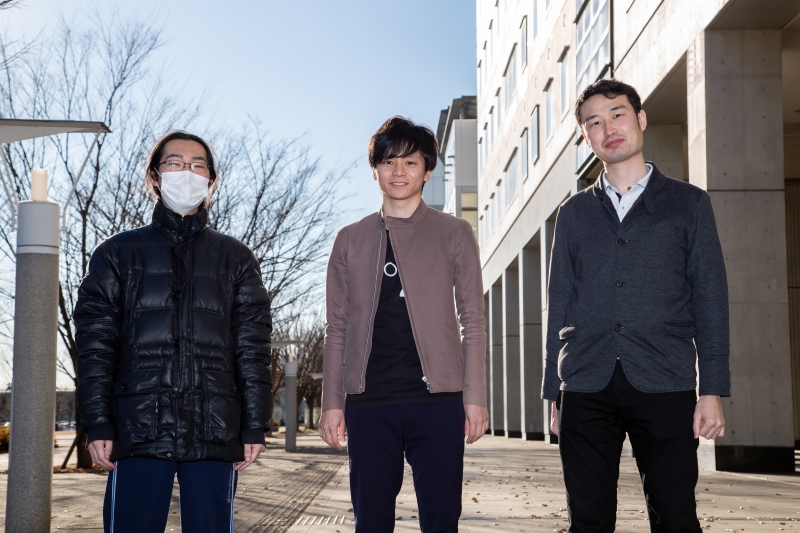 Established in April 2020, the startup develops thrusters, or engines, for microsatellites. Pale Blue is one of the few companies in the world developing thrusters using water as propellent. It has been selected for a Japan Aerospace Exploration Agency program based on the RAPIS-3 satellite, for which it is developing a hybrid water-based thruster. In addition to being selected for the 1st Round program by UTokyo IPC, it has procured funding through a third-party allotment of shares to investment funds operated by IncubateFund and Mitsui Sumitomo Insurance Venture Capital Co., Ltd., as well as loans from financial institutions. The name Pale Blue was chosen for conjuring up an image of water, and as a nod to Pale Blue Dot, a photograph the U.S. space probe Voyager took of Earth from about 6 billion kilometers away in 1990.