Sun Xiaojun lost his right leg to illness when he was 9. When he arrived in Japan in 2012 on an exchange program between his university in China and Tohoku University, he walked with the support of crutches. Impressed by the kindness that many Japanese showed during his one-year stay, Sun decided to enroll in a master’s program at the University of Tokyo’s Graduate School of Engineering after completing his studies at Huazhong University of Science and Technology.

On a visit to the Meguro ward office, which was close to his dormitory on UTokyo’s Komaba Campus, Sun learned that the Japanese social welfare system subsidizes the purchase of prosthetic limbs. “Using crutches was very inconvenient in many ways, because it blocked the use of both hands,” he said. “The prosthetic leg freed up the hands, enabling me to hold an umbrella or carry a cafeteria tray, for example. Above all, outwardly I looked like a ‘typical’ (nondisabled) person, which meant a lot to me.”

But as he used the artificial limb, Sun encountered many problems. As the prosthesis lacked motor capability, he tired easily and was prone to falls, and he found it difficult to go up and down stairs. At that time, he was working for a Japanese multinational corporation as an engineer of audio speakers.

“As an engineer, I had a strong urge to make a better prosthetic leg,” Sun said. He decided to enter the doctoral program at UTokyo’s Graduate School of Information Science and Technology in 2015. In December 2018, he established BionicM Inc., a startup that develops powered prosthetic legs for amputees.

Using technologies used in humanoid robots, the company’s prosthetic legs can detect the movements and intentions of the user with a sensor — realizing the fusion between the human body and robotics.

BionicM’s prosthetic legs are scheduled to go on the market in fall 2021. Sun’s future plans include developing devices utilizing robotics that can be used by seniors who have trouble with mobility, as well as nondisabled people, to cover short distances.

During his doctoral studies, Sun learned the basics of robotics and developed powered prosthetic legs. It was a totally new area for him. “Shortly after I started my research, I became really enthusiastic about making this technology available to the world someday,” Sun recalled.

In the first year of his doctoral program, he participated in a program called Entrepreneur Dojo, offered by UTokyo’s Division of University Corporate Relations (DUCR), to learn how to become an entrepreneur. His research team was then selected in 2017 to take part in the “Todai to Texas” team, which DUCR sends every year to the South by Southwest (SXSW) conference and festival in Austin, Texas, in the U.S. The team’s exhibition showcased a powered prosthetic leg and received the annual gathering’s Interactive Innovation Award in the Student Innovation category. It was the first time a Japanese team won the award — in any of its 13 categories — given to innovative ideas and products at SXSW, one of the world’s biggest technology and cultural events. “Without such support, we couldn’t have introduced our technology to the world,” Sun said.

Sun also received various forms of support from the university, including entrepreneurship training, office space in an incubation facility and technology transfer know-how, as well as the kind of detailed advice one needs to launch and run a startup.

Breaking into a monopolistic market

Most prosthetic legs used today are not powered. Two European firms currently make powered prosthetic legs and sell them in Europe and the United States for around 10 million yen. The prohibitive price makes the prostheses unaffordable for many amputees. And in what is essentially a monopolistic market, there has reportedly been little innovation in the past few years.

BionicM is trying to break into this market. “We have managed to keep development costs down thanks to our use of the university’s technologies,” Sun said. “We plan to sell our products at one-third of the price charged by our rivals.” In order to tap into the huge Chinese market, BionicM established a subsidiary in the city of Shenzhen in southern China, in 2020.

The company’s powered prosthetic legs have a motor, a battery, a control board and a sensor that detects the user’s movements. Sun has been working on extending battery life since he was a doctoral student. His company has now developed a battery that with just one recharge has enough power to cover more than the average daily number of steps for an adult. Sun’s next challenges are to reduce motor noise and further improve the sensing system. “Prosthetic legs are used in various settings, so they need to detect random human movements with the sensor,” he said. “It’s a daunting challenge.”

BionicM regularly asks prosthetic leg users to take part in experiments so that its engineers can improve the sensing system in discussions with the in-house prosthetist and physical therapist.

Beyond a niche market

About 100,000 people in Japan currently use prosthetic legs. According to one report, the global market for the products is worth about 200 billion yen. “We would like to develop mobility devices for people who suffer from weakness in their legs, including seniors, in the future,” Sun said. “It’s a big market. I believe there is a huge demand for such devices. I ask myself every day if we can develop devices for short-distance mobility that are smarter than bicycles and wheelchairs.”

Since mid-2020, Sun has been producing short videos on the theme of prosthetic legs and posting them on social media as part of BionicM’s digital marketing efforts. His account in China, which has attracted 20,000 followers, introduces the Japanese social welfare system and describes prosthetic legs from various perspectives. “On weekends, my wife takes a video of me walking outside, which I later edit and select music to accompany it,” Sun said. It’s a welcome break from his long, busy days as a hardworking CEO. “I love my work, so the time flies very fast,” Sun said, showing his resolve to make life more convenient for amputees and the general public. 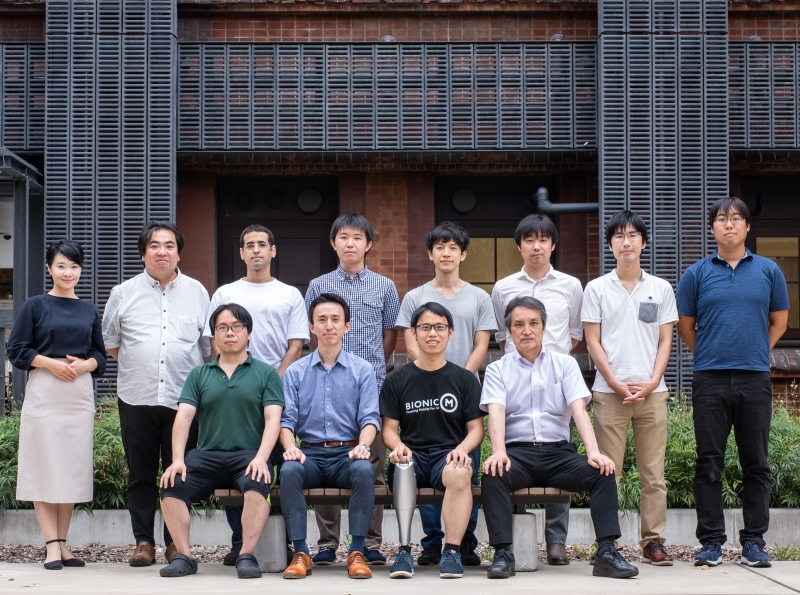 CEO Sun Xiaojun started developing powered prosthetic legs in Professor Masayuki Inaba’s JSK Robotics Laboratory at UTokyo’s Graduate School of Information Science and Technology. In 2016, his research was selected for the START program for creating startups, sponsored by the Japan Science and Technology Agency (JST). With the support of the University of Tokyo Edge Capital Partners Co., Ltd. (UTEC), which became a START project promoter, he established BionicM Inc. in December 2018, based on this technology. Besides startup funding from UTEC, the company received support from the 1st Round incubation program of University of Tokyo Innovation Platform Co., Ltd. (UTokyo-IPC). In 2020, BionicM procured 550 million yen from UTokyo-IPC, UTEC and JST through a third-party allocation of shares. Under the slogan “Powering Mobility for All,” the company aims to provide smarter and more comfortable mobility devices and services for all people.