CEO Eiko Hashiba of VisasQ Inc. experienced various life events in the 11 years between her graduation from the University of Tokyo’s Faculty of Economics and the establishment of her startup in 2012. During that time, she worked for an investment bank, a consumer goods manufacturer and an investment fund, while also becoming a mother and raising a daughter in her private life.

Despite her work and personal commitments, Hashiba kept striving to grow as a professional, passing the U.S. Certified Public Accountant examination and obtaining a master’s degree in business administration from the Massachusetts Institute of Technology in the United States.

Her hard work and dedication culminated in a business model to help increase employment opportunities through work style reform, which is how Hashiba describes VisasQ’s mission.

VisasQ offers a matching service between people with specialized business know-how and companies that need such expertise. The startup, which Hashiba launched on her own, has now grown to become one of Japan’s biggest knowledge-sharing platforms. In 2020, VisasQ was listed on the Tokyo Stock Exchange’s Mothers section for emerging companies (now known as the Growth market). In the following year, the company acquired Coleman Research Group, Inc. of the U.S., an enterprise in the same business field, but twice as big.

Hashiba said she was able to expand her business thanks to some harsh, constructive advice she received, as well as her studies at UTokyo and support from her teachers and friends there. She is now set on making her company the global leader in the industry by accelerating its expansion both domestically and internationally.

“I can pay for the hour talking with this person”

Hashiba left her first job after less than a year when she became pregnant. She said this important life event made it difficult for her to picture climbing the corporate ladder at a Japanese company. At that time, the Japanese labor market did not encourage job mobility or taking a career break. That made Hashiba open to the idea of becoming an entrepreneur. When she enrolled in the MBA program at MIT a few years later, she learned how entrepreneurship was regarded as a natural choice.

In 2012, she had the chance to turn her aspiration into action. “I was struggling to grow and advance to the next stage (at the third company),” Hashiba said. This also coincided with her devoting time to help her daughter prepare for junior high school entrance examinations.

While she was working on a business model to pursue, after leaving the company, Hashiba was introduced to a well-known businessman who had been very successful in the field she wanted to enter. When she explained her business plan to him, he strongly criticized her plan, and explained in detail why it was not viable.

Hashiba took his criticism in stride. “I thought to myself, ‘I wanted to meet this person sooner and I could even pay for the hour I spend talking with him,’” she recalled.

The meeting inspired her to launch VisasQ, which now operates globally, with 450,000 experts in Japan and abroad. The platform is being used by leading Japanese companies such as Panasonic Corp., Mitsubishi Estate Co., Ltd. and AGC Inc., to name a few.

One of Hashiba’s biggest concerns after the company’s launch was how to procure funds, especially from venture capital firms. A venture capitalist pointedly told her, “None of your staff members are full-time employees because you don’t have sufficient leadership to get other people involved in your enterprise.”

Then one day, Hashiba came across a post on the Ministry of Economy, Trade and Industry (METI) website inviting businesses to apply for a subsidized project helping to generate various services to facilitate the use of human resources through matching and recurrent education.

“From the time I was at university, my friends and I got into the habit of thinking about things like what path Japan should take,” Hashiba said. “The METI project’s theme was to think about how knowledge should flow into growth industries at a time when our country’s economic structure is changing. So, I was able to write up my proposal without any difficulty.”

Hashiba thinks her proposal was accepted thanks to her broad perspective on Japan and the rest of the world. She believes her time at UTokyo made her better able to discuss issues such as how Japan can revitalize itself and what we can do to improve society.

The personal network Hashiba cultivated at UTokyo also helped her after she launched her business. For instance, she took an economics seminar with Professor Motoshige Ito (now emeritus professor) while a student at the university, and because of this connection, she invited her former teacher to become a member of VisasQ’s advisory board, and continues to receive valuable advice from him.

She also received crucial advice on work style reform from Professor Noriyuki Yanagawa of the Graduate School of Economics, an expert on the issue, who studied under Ito. “Unfortunately, I never took Professor Yanagawa’s course, but he willingly granted my request for a meeting when I told him I was a student of the Ito seminar,” Hashiba said. “Professor Yanagawa later agreed to be featured in our company’s email magazine. I am so grateful to him.”

Increasing the like-minded a key to growth

Hashiba said the key to VisasQ’s future growth is making it a place where like-minded people can gather, fulfill their potential and grow as individuals. She sees her mission as creating a company that attracts and motivates the talented and “like-minded.”

Her main goal is to take VisasQ, now the sixth-biggest firm in the industry worldwide, to top position in the global market. The company has established business hubs in Europe, the United States and Hong Kong through the acquisition of Coleman Research and has set up a subsidiary in Singapore, which deals with Asian markets outside Japan.

“Amid the tide of globalization, work styles in Japan are at a turning point,” Hashiba said. “It’s very exciting to think about the kind of global platform we can offer and what value we can provide toward Japan’s work style reform.”

Hashiba works long hours. She often has late-night meetings with business associates and employees in different time zones. So, she makes it a rule to take the entire weekend off. Her current hobby is taking tea ceremony lessons. “If I don’t make tea in line with the traditional procedure or happen to handle tea utensils in an improper manner, my tea master corrects me sternly,” Hashiba said. “It is always important for me to be given strict instructions.”

And in the same way, Hashiba will continue to seek sound advice from experts in any field — even if their advice is harsh. 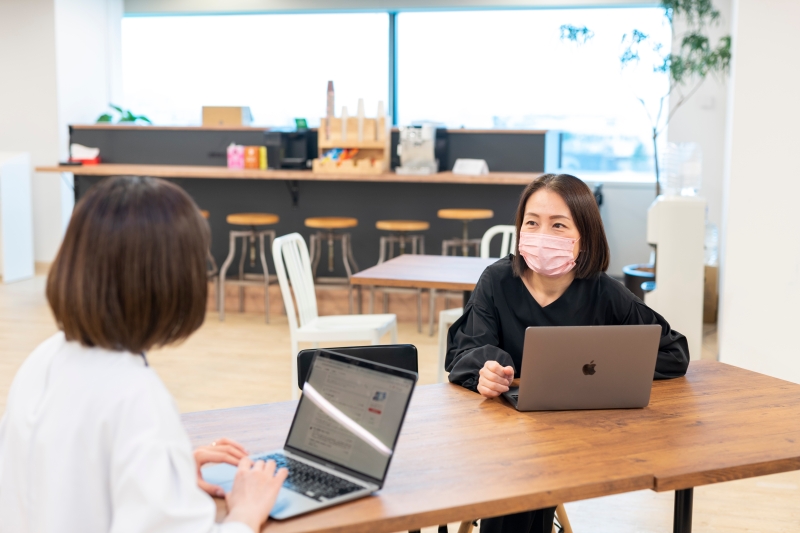 Established in March 2012 as walkntalk Inc., the company was renamed VisasQ in 2015. Its VisasQ service was officially launched in 2013 after being selected for a Ministry of Economy, Trade and Industry (METI) project designed to help generate services that would facilitate the use of human resources through matching and continuing education. In 2018, METI designated VisasQ as a J-Startup, a promising company eligible to receive incubation support from the government and the private sector. In March 2020, the company was listed on the Tokyo Stock Exchange’s Mothers market. In the same year, it established VisasQ Singapore Pte. Ltd. In November 2021, it acquired Coleman Research Group, Inc. of the U.S. At present, VisasQ offers a service matching business experts with companies, based on a database of 450,000 people in more than 190 countries. It has over 400 employees worldwide.