Bone fracture and osteoarthritis are common causes of joint deformity, which often results in pain and disability. This is commonly treated by replacement with an artificial joint, and more and more such operations are carried out each year: over 4.3 million around the world and 170,000 in Japan alone. Artificial hip joints in particular have improved the lives of many people in the five decades since they entered general use. 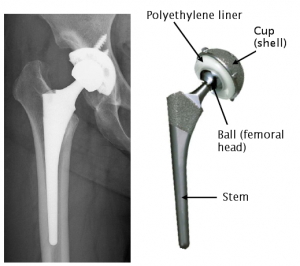 The structure of the artificial hip joint

But the artificial hip joint has a serious drawback. In some cases, the bone around the implant is lost over time as the hip is used, loosening the implant. Eventually, another operation becomes necessary to replace the joint. But what causes this bone loss?

The articulating surface of the artificial hip is composed of the surface of a spherical ball, usually metal, fixed to the head of the femur, and a liner, usually polyethylene, in a hemispherical socket fixed to the pelvis.

With prolonged use, friction between the socket liner and the ball of the joint releases tiny particles of polyethylene. Macrophages, vital cells in the body’s immune system that capture and remove dead and foreign material, target these particles. In doing so, the macrophages sometimes also activate cells called osteoclasts, which then start to dissolve the surrounding bone.

The newspaper article that started an excellent collaboration

This loss of bone makes the operation to replace an artificial hip joint extremely difficult. Each further operation requires a longer period of hospitalization and postoperative rehabilitation, and increases the physical and emotional burden on the patient, not to mention the cost. For these reasons, the search was on for a longer-lasting artificial hip joint.

In 1999, a patient showed a newspaper article to Project Associate Professor Toru Moro of the University of Tokyo’s Graduate School of Medicine. It was an article about Professor Kazuhiko Ishihara’s discovery of a means of industrial-scale synthesis of 2-methacryloyloxyethyl phosphorylcholine (MPC) polymer at the University of Tokyo’s ,School of Engineering. The headline read, “Could also be used in artificial joints.”

This prompted Professor Moro and his colleagues, Project Professor Yoshio Takatori at the Graduate School of Medicine and Associate Professor Hiroshi Kawaguchi of the University Hospital’s Department of Orthopaedic Surgery, to call on Professor Ishihara.

Professor Ishihara researches biomaterials, highly biocompatible materials that are not identified as foreign matter by the body’s immune system. Materials that induce biological reactions such as blood clotting and inflammation cannot be used in biomedical devices implanted in the body.

Professor Ishihara was engaged in research that focused on the cell membrane. The cell membrane is composed of a lipid bilayer, the outer surface of which is coated with hydrophilic phosphorylcholine (PC) groups.

This is the same PC group that is the base of the MPC polymer, for which Professor Ishihara had developed an industrial-scale production process. Wet an MPC polymer-treated plastic slide and the MPC units grab on to water molecules, creating a surface that is so slippery it feels almost slimy. It feels like trying to grab hold of an eel.

When a material is treated with the MPC polymer, with its composition resembling the cell membrane, the material causes almost no detectable biological reaction. Many implanted medical devices such as artificial hearts are already coated with this polymer.

Mimicking the structure of cartilage

Phospholipids create a smooth layer on the surface of the cartilage that covers joints. The team hit on the idea that if it were possible to coat the articulating surface of the artificial hip joint with MPC polymer, they could recreate the surface structure of cartilage.

“The idea of surface treatment was revolutionary.” says Professor Takatori. 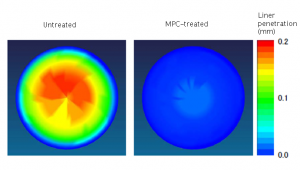 Thus began an interdisciplinary effort, involving engineering and medical researchers. Adding a medical device manufacturer to the team, the collaboration transcended the divisions between engineering, medicine and industry.

Cartilage has a phospholipid polymer bound to its surface much like a beard. Aiming to recreate this structure, the team used a method called photoinduced graft polymerization to bind a beard of MPC polymer to the surface of polyethylene.

Osteoclast formation and bone resorption resulting from transplant of particulate matter into mice
As the MPC polymer is highly biocompatible, even it does wear down any particles produced do not result of the activation of osteoclasts. The long-life artificial hip joint was ready.
Reproduced with permission. ©2004 Nature Materials

This new artificial hip mimicking the natural joint showed even lower friction than the team had expected. The hydrophilic MPC polymer beard attracted water molecules which formed a layer between the polyethylene socket liner and the ball of the femoral head. As a result, the coefficient of friction of the socket liner dropped phenomenally. Even simulating 15 million steps, roughly equivalent to 15 years of walking, caused hardly any wear on the lining at all. As of today in 2011, one simulation has exceeded 70 million steps, equivalent to over 70 years of use, and still shows no major signs of wear.

As the MPC polymer is highly biocompatible, even it does wear down any particles produced do not result in the activation of osteoclasts. The long-life artificial hip joint was ready.

From the laboratory to the bedside

“I hope this will be a device that patients will request from their doctors.”
Project Associate Professor Toru Moro, Graduate School of Medicine

The goal of developing medical devices is to create something useful for treating patients. Yet there are many hurdles, including test simulations and clinical trials, on the way to creating a usable medical device.

“To use an analogy, the university spends time and money to develop a Formula-1 car. Industry then uses that technology to create a popular car.” says Professor Ishihara.

The question is how to commercialize the laboratory technology. Dr. Masayuki Kyomoto of Japan Medical Materials Corporation, a medical device manufacturer, was involved in product development at both the School of Engineering and the Graduate School of Medicine. “Professor Ishihara says a popular car, but actually we have to make something more like a luxury sports car,” says Dr. Kyomoto. The artificial hip joint implanted in the body has to be made to a very high specification, even among medical devices. To achieve this, medical needs and engineering technology came together to fulfill the highest standards of reliability, production, and functionality at the same time through an advanced development process.

“As soon as we obtain experimental results we can get together and discuss them. Having the Schools of Engineering and Medicine close by on the same campus was key to this process,” says Professor Ishihara.

The fruits of this interdisciplinary research collaboration finally reached the bedside. This is the hallmark of research at the University of Tokyo: a place where talent and passion meet across boundaries and borders, and where new ideas and solutions are born.