The region within a few hundred light years of the central black hole of our Galaxy, often called the nuclear bulge, presents us with various interesting objects and phenomena. 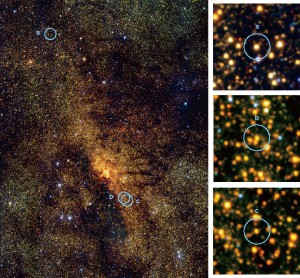 The finding charts of the classical Cepheids discovered in the nuclear bulge. ©Noriyuki Matsunaga

We discovered in this region classical Cepheid variable stars, pulsating supergiants, whose ages can be derived accurately from their periods. All three of our Cepheids have pulsation periods near 20 days and ages close to 25 million years (Myr), suggesting that active star formation occurred at the period around their births. In contrast, the absence of shorter-period Cepheids shows that the star formation rate was lower between 30 and 70 Myr ago.

We suggest that the rate of star formation in this region has changed on a time scale of a few tens of millions of years possibly due to a stochastic gas inflow into the nuclear bulge.