Dethroning the dictator A better model of how ATP synthase works

A team from the University of Tokyo’s Graduate School of Engineering under Professor Hiroyuki Noji used high-speed atomic force microscopy (AFM) to film a single ATP (adenosine triphosphate) synthase nanomotor. Their results have upended the main theory of how the 10 nm motor functions. 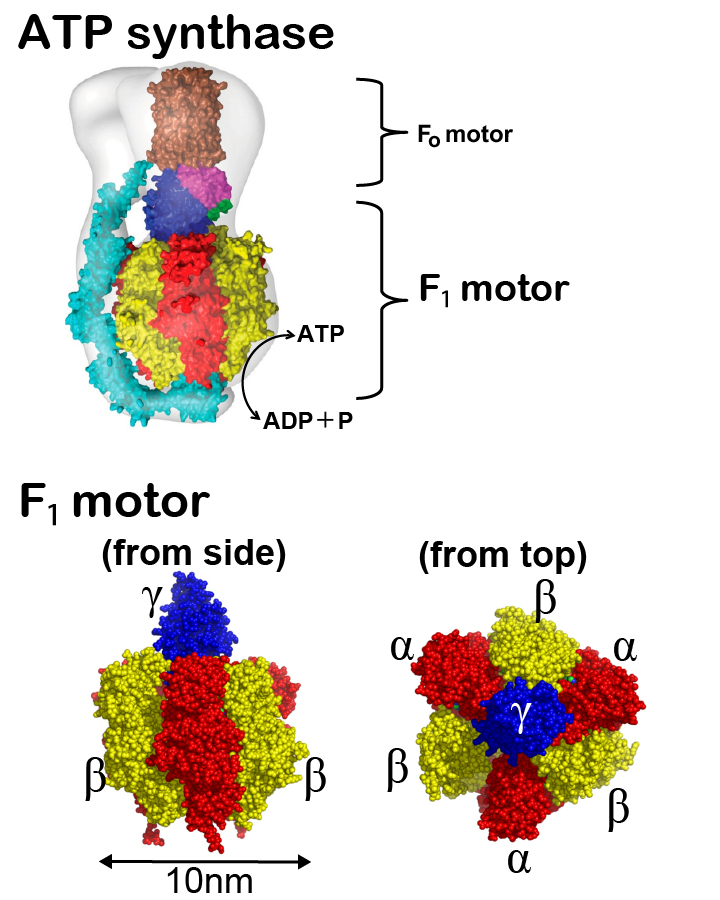 ATP synthase is composed of FO and F1 motors. The FO motor embedded in the cell membrane is driven clockwise by the flow of protons into the cell. © Ryota Iino 2011

The F1 motor in ATP synthase is composed of a central gamma unit and a ring of three alpha and three beta proteins. The beta proteins deform in turn and transform ADP (adenosine diphosphate) into ATP. The widely-accepted “gamma-dictator model” assumed the gamma unit, driven by the powerful FO motor (see image), dictated the order of beta protein deformation and controlled the F1 motor’s conversion of ADP to ATP.

Professor Noji’s team fixed the F1 ring to a mica surface and observed it using high-speed AFM, a technique pioneered in Japan and without which this research would have been impossible. A tip just atoms across is oscillated over a single protein to produce a 12 fps film of its activity. The team demonstrated conclusively that the F1 ring rotates and deforms without the gamma bar, but also that the combination of the two results in far more rapid and precise action. Team member Dr Ryota Iino suggests that a new model of ATPase function is required based on a conception of protein subunit cooperation.

?ATP synthase is an incredibly powerful motor that operates at almost 100% energy conversion efficiency, and understanding how this is possible is one factor motivating Dr. Iino’s research. He also suggests that as there are similar structures in other cellular processes, decoding the workings of this unique mechanical catalyst could greatly improve our knowledge of cellular function in general. In the future, it may also open the way to artificial nanomotors to drive chemical processes or even solar-powered nanomotors for harvesting solar energy.