Researchers at the University of Tokyo (Todai) Graduate School of Pharmaceutical Sciences have described the pathway by which the cholera toxin enters cells. 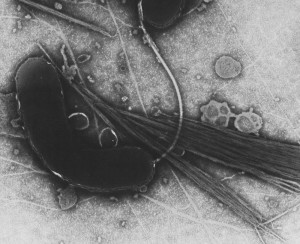 Individual cells are bounded by a plasma membrane through which they take up and release many compounds via an intracellular transport network. It was known that several toxic proteins produced by bacteria (such as cholera toxin) and plants (such as ricin) hijacked a part of this transport network called the retrograde membrane flow to gain entry to the cell, but the molecular details of this route were not well known.

Using COS-1 cells, in which organelles are well separated, the research team demonstrated that phosphatidylserine (PS) in recycling endosomes (REs) is essential to the retrograde membrane flow. The protein evectin-2 (evt-2), which the team demonstrated binds specifically to PS, works in combination with PS to direct retrograde membrane flow via REs to the Golgi complex.

Understanding the mechanism by which cholera toxin enters cells provides scientists with further options for preventing infection with or the emergence of symptoms of this common disease which infects 3 to 5 million and kills between 100,000 and 120,000 people around the world each year.