3281 feet under The history of neutrino physics at Kamioka

“Since that moment, neutrino oscillation has been an accepted fact in physics.” The University of Tokyo’s underground Kamiokande experiment was the first observatory in the world to detect supernova neutrinos, and an upgraded experiment, Super-Kamiokande, then confirmed that neutrinos oscillate, overturning the laws of physics. Hyper-Kamiokande is now under development, aiming to discover what comes next.

The advent of neutrino astronomy 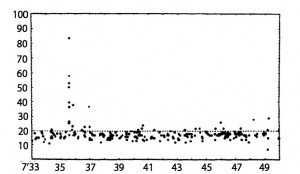 Neutrino events observed in Kamiokande detectors from supernova SN 1987 A. © Institute for Cosmic Ray Research, The University of Tokyo.
The horizontal and the vertical axes show the time (minutes) and the number of photomultiplier tubes which detected photons, respectively. The vertical axis is roughly proportional to energy of the electron. The high energy events detected at 7:35 GMT corresponds to the neutrino burst from SN1987A.

On 23 February 1987 at 7:35 GMT, Kamiokande detected 11 neutrinos emanating from a supernova burst in the Large Magellanic Cloud, during a period lasting approximately 13 seconds. This and a series of other successes earned the 2002 Nobel Prize in Physics for the project leader, Masatoshi Koshiba, now a special university professor emeritus at the University of Tokyo.

The Kamiokande experiment consists of 1,000 photomultiplier tubes installed around the inner wall of a tank filled with 3,000 tons of purified water, located 1,000 meters underground in a former zinc mine in Kamioka, Gifu Prefecture, central Japan. The lab, constructed in 1983, was originally designed as a detector to look for proton decay, a phenomenon predicted by Grand Unified Theories.

Speaking of these accomplishments, Takaaki Kajita, involved in the Kamiokande experiments since he was a graduate student and now director of the Institute for Cosmic Ray Research, says, “In 1983, shortly after the Kamiokande experiment began, Koshiba realized that the energy spectrum of electrons from the decay of cosmic ray muons was measured down to low energies, suggesting that solar neutrinos could be observed if the background noise was reduced. This was a major step forward in solar neutrino observation. He immediately decided to radically modify the Kamiokande detector. This was a great insight.”

The modifications made by Koshiba included a way to reduce the neutrino background (noise) to about one-thousandth of the original, an advancement that enabled solar neutrino observation to start in January 1987. Less than two months later, the supernova appeared. “Though the neutrinos from the explosion proved to have slightly greater energy than ordinary solar neutrinos, they probably would not have been detected without Koshiba’s improvements,” says Kajita.

Supernova explosions occur when stars that are eight or more times as massive as the Sun end their life. The bursts had been predicted theoretically to release in roughly 10 seconds in the form of neutrinos approximately 1,000 times more energy than our Sun releases over a period of 4.5 billion years. Kamiokande’s results?the detection of 11 neutrinos in 13 seconds?proved the veracity of this prediction and paved the way for neutrino astronomy as a new field of physics. 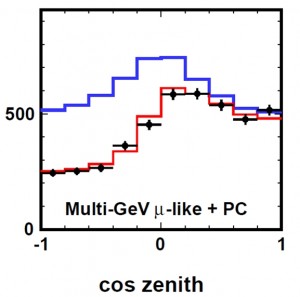 Observation data of atmospheric mu-flavor neutrinos. © Institute for Cosmic Ray Research, The University of Tokyo.
The horizontal axis shows the cosine of the neutrino’s arrival angle with respect to the vertical (zenith angle). +1 and -1 correspond to upward-going and downward-going neutrinos, respectively. Roughly half the number of upward-going neutrinos has been lost by neutrino oscillation after the long travel through the earth. Here, black dots, red and blue lines show respectively observed data, and expected number of events with and without neutrino oscillation.

“But around the fall of 1986, we began to get the feeling that there was something odd in the data on atmospheric neutrinos,” Kajita recalls. The research group counted the atmospheric neutrinos Kamiokande had detected and found some disparity between the number of electron and muon types. While the number of electron neutrinos matched the theoretical prediction, only 60% of the expected number of muon neutrinos were arriving. “This finding was reported in a 1988 paper, in which we referred briefly to ‘neutrino oscillation’ as a possible cause,” says Kajita.

Neutrino oscillation refers to a phenomenon whereby a specific neutrino flavor?electron, muon or tau?can change to a different flavor. This change is only possible if neutrinos have mass. Given that the current dominant model of particle physics, the standard model, assumes that neutrinos have no mass, confirming that they did oscillate would bring about a significant advance in particle physics.

Spurred on by this realization, Kajita and his colleagues went to work on analyzing the reams of data on atmospheric neutrinos, focusing in particular on high-energy particles, because they also knew from which direction they came. The results obtained showed that while the expected number of muon neutrinos were arriving from above, only half the expected number were arriving from below after having travelled through the earth.

Detection of neutrinos by Super Kamiokande. © Kamioka Observatory, ICRR, The University of Tokyo.
Upon colliding with nuclei in Super-Kamiokande’s water tank, electron neutrinos produce electrons and muon neutrinos produce muons. When charged particles, including electrons and muons, travel through water faster than the speed of light in that medium they emit Cherenkov radiation, which can then be detected by the photomultiplier tubes, indicating the presence of a neutrino. The image shows observational data for atmospheric neutrinos. The image on the left shows an observed muon neutrino event and on the right an observed electron neutrino event.

This discrepancy demonstrated that the muon neutrinos were changing to a different type of neutrino flavor while travelling over the long distance through the Earth. “We had mentioned the possibility of neutrino oscillation accounting for this in a 1994 paper, but when taking into account statistical error, the results were only significant at the 99% level, which is insufficient for confirmation. We wouldn’t be able to say for certain until the Super-Kamiokande experiment,” says Kajita.

Super-Kamiokande went into operation in April 1996, employing a 50,000-ton filled water tank and 11,200 photomultiplier tubes, expanding drastically the collection of atmospheric neutrino data. In the spring of 1998, the experimental team announced the effects of neutrino oscillation in a report delivered at the International Neutrino Conference held in nearby Takayama. “Since that moment,” says Kajita, “neutrino oscillation has been an accepted fact in physics.”

In 2001 it was determined that solar neutrinos also oscillate.1 This oscillation, too, causes electron neutrinos to change flavors. 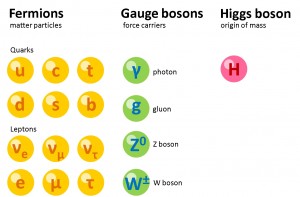 Standard model of particle physics.
The elementary particles that make up matter are classified as quarks and leptons. There are six of each type.

To this end, the T2K (Tokai to Kamioka) experiment began in April 2009. Its aim was to generate muon neutrinos at the Japan Proton Accelerator Research Complex (J-PARC) facility in Tokai, Ibaraki Prefecture, and send them to the Super-Kamiokande location 300 kilometers to the west. Since the energy of muon neutrinos can be controlled in this facility, muon neutrinos with the ideal energies could be transmitted from J-PARK. “So far, T2K has detected more than ten muon-electron oscillations,” says Kajita.

In June 2012, at Neutrino 2012, the 25th International Neutrino Conference held in Kyoto, researchers from T2K and from China, Korea and Europe presented their data for the third mixing angle (θ13). There was no discrepancy among the findings. 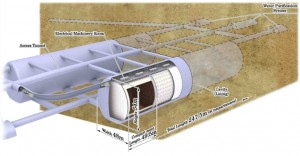 A major mystery still remaining in particle physics is why the universe today is composed mostly of matter, with virtually no antimatter to be found (termed matter-antimatter symmetry breaking or symmetry violation). The prevailing hypothesis is that matter-antimatter asymmetry arises because the laws governing matter and antimatter are different, if only slightly. Two Japanese scientists, Makoto Kobayashi and Toshihide Maskawa, shared the 2008 Nobel Prize in Physics for their work in revealing the broken symmetry of quarks.

However, as Kajita puts it, “From the studies conducted in and after the mid-1980s, it became apparent that the dominance of matter over antimatter in the universe cannot be explained by the broken symmetry of quarks alone. Neutrinos, like quarks, are elementary particles that constitute matter in the universe, so their symmetry violation also needs to be fully explained.”

To solve the riddle of neutrino asymmetry, scientists are developing the Hyper-Kamiokande project, a far larger version of Super-Kamiokande, equipped with a tank filled with one million tons of water. “With large-scale projects also under consideration in the United States and Europe,” Kajita points out, “neutrino research is unarguably entering a new stage of advancement.”

2 What scientists call a “mu-flavor” neutrino is one that produces a muon when it interacts with matter. However, in quantum mechanics, this mu-flavor neutrino does not necessarily have to have a fixed mass?rather, it is natural that its mass is not fixed. The electron-flavor, mu-flavor, and tau-flavor neutrinos that can be detected exist in three mass states that may be called ν1, ν2 and ν3. Particles are expressed as wave functions in quantum mechanics, and neutrinos are states in which the wave functions of each mass states are superimposed, with respective “mixing angles” of θ12, θ23, and θ13. It is known that the mixing angle θ23 corresponds to muon-tau oscillation, but this does not mean that mixing angle θ12 and mixing angle θ13 necessarily correspond to electron-muon and electron-tau oscillation. 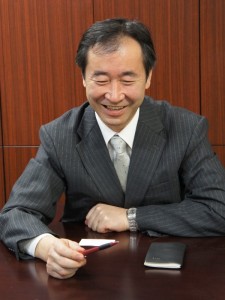 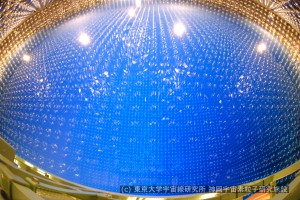 Super Kamiokande. From the upper of the tank(Jun.26, 2006)
© Kamioka Observatory, ICRR（Institute for Cosmic Ray Research), The University of Tokyo