Sunlight is the most abundant natural energy source. Indeed the Sun provides the source for all forms of energy (except for nuclear power): fossil fuels were created by sunlight in the past, and wind power, wave power, and biomass also represent energy created by sunlight of today. The total amount of energy delivered by the Sun is equivalent to the energy provided by about 50 million nuclear reactors. If we can harness that energy efficiently, we will never be short of energy. 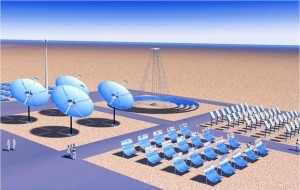 Illustration of solar power generation in the desert, the theme of GS+I project.
© Global Solar+ Initiative.

Before fully introducing solar power generation as a new energy source, it is essential to improve the conversion efficiency of solar cells, secure backup power sources, and develop large secondary batteries for short-term storage, as well as to develop technologies that can store solar energy temporarily or for a long period of time on a medium- to long-term basis. It is also necessary to further foster the introduction and spread of solar power generation in low-latitude desert areas where solar energy can be obtained at the lowest cost. To this end, the University of Tokyo has been commissioned by the New Energy and Industrial Technology Development Organization (NEDO) to research and develop innovative solar power generation technologies. Accordingly, the University has been conducting research and development on highly efficient next-generation solar cells, while launching a project to establish a sustainable global energy system based on the use of solar energy (“Endowed Chair for Global Solar+ Initiative”: GS+I) toward the large-scale introduction of solar power generation under international cooperation.

(This article first appeared in the tenth issue of Tansei.)