A water molecule has a very simple structure?one oxygen atom and two hydrogen atoms bonded together at an angle. Yet when placed under certain conditions, water molecules form beautiful hexagonal crystals. Curiously, they naturally take this form without any outside effort.

This spontaneous formation of complex systems from simple components is called self-assembly. The growth of seeds into plants and the formation of organized human society can also be seen as self-assembly in a broad sense, and the concept is attracting attention from many disciplines.

In the world of chemistry as well, interest in self-assembly is growing. Through coordination bonding, hydrogen bonding, hydrophobic interactions, and other weak bonding, simple, small molecules assemble and with relative ease form large, complex systems that ordinarily would be difficult to construct. 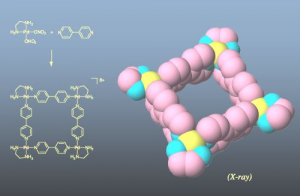 Many researchers at the University of Tokyo are tackling self-assembly. In fact, it was a 1990 discovery by Professor Makoto Fujita, now of the Graduate School of Engineering, Department of Applied Chemistry, that brought great attention to this field. By mixing a palladium complex with a simple ligand (in this case a nitrogen-containing hydrocarbon) in a simple experiment, it was discovered that eight subunits assembled instantaneously into a square structure in nearly 100% yield. This result was met with great surprise at the time (Figure 1).

With the same technique, three-dimensional molecular cages with large internal cavities can be easily constructed. By trapping various molecules in such cages, unusual reactions that do not ordinarily occur in solution have been observed to take place. The Fujita laboratory’s highly influential report of a “crystalline sponge method” in 2013, an innovative molecular structure analysis method is also a groundbreaking extension of this research. 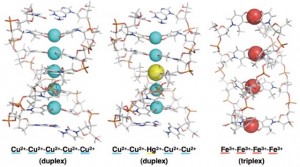 In another direction, Professor Mitsuhiko Shionoya of the Graduate School of Science, Department of Chemistry has also utilized coordination bonding between metals and ligands (in this case, nitrogen- or oxygen-containing molecules) to construct artificial double and triple helix DNAs, in which hydrogen-bonded natural base pairs are replaced by metal-mediated based pairs. The linear arrangement of metal atoms in these complexes can be regarded as the world’s thinnest electrical wires (Figure 2).

In this manner, self-assembly methods have surpassed the level of simply creating beautiful structures, and have reached the stage of crafting functional molecular systems. 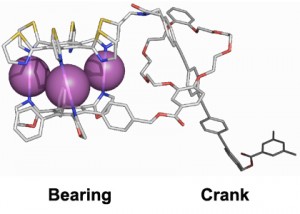 For example, by devising ligands with various shapes, compounds with sophisticated functions such as molecular ball bearings and molecular cranks have been produced. In the compound shown in Figure 3, when the molecular bearing on the left rotates, the rod shaped crank on the right moves back and forth. This could potentially be a part of an externally-controllable molecular machine. 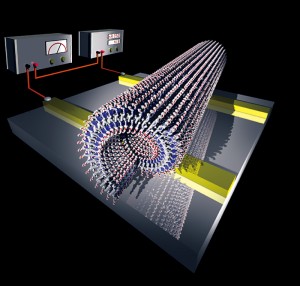 It has been shown that electrical current can flow through the stacked HBC walls of these tubes, and furthermore, by appending atoms of fluorine or other elements to the HBC, the electrical characteristics can be altered. By skillful assembly, nanosized cables, diodes, transistors and so on could potentially be constructed using this method (Figure 4).

There are many difficulties in constructing highly functional complex molecular systems with present synthetic methods, and as a result self-assembly is becoming increasingly important. Self-assembly looks set to become an inescapable keyword in materials science.