The world of titanium dioxide Market dialogue and breakthrough

Products employing titanium dioxide as a photocatalyst are becoming more and more common in everyday life. The very simple reaction of splitting water with light energy has blossomed in both industry and academia, giving birth to a surprising number of applications. Begun by Emeritus Professor Kenichi Honda and Honorary Emeritus Professor Akira Fujishima at the University of Tokyo, today Professor Kazuhito Hashimoto continues this research at the Graduate School of Engineering.

Discovery of the Honda-Fujishima effect

When titanium dioxide (TiO2) is irradiated with light, the energy absorbed enables the decomposition of water into hydrogen and oxygen. This phenomenon was discovered by chance by Akira Fujishima, a graduate student working under the guidance of Associate Professor Kenichi Honda, beginning the half-century story of titanium dioxide. 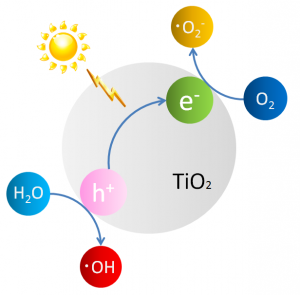 The discovery that titanium dioxide photocatalyzed the decomposition of water was announced in 1972 in the journal Nature, and is now called the Honda-Fujishima effect after its discoverers. That titanium dioxide, a common material used in white paint and other familiar products, should show this effect was greeted at the time with great surprise. It was even questioned as to whether it would be good for Fujishima to present such a dubious observation at his doctoral defense.

Dr. Fujishima however, believed more strongly than anyone in the potential of this catalyst, and patented it himself while still a student. “Professor Fujishima’s strong appreciation of this discovery’s industrial potential from the start was groundbreaking,” says Professor Kazuhito Hashimoto of the Graduate School of Engineering’s Department of Applied Chemistry.

Photocatalysis was again in the spotlight around 1980 during the second oil crisis. Because adding titanium dioxide powder to water containing organic material and irradiating with light causes decomposition of the organic material producing hydrogen gas, it was hoped that this would become an important energy source. However, because titanium dioxide can only utilize the ultraviolet wavelengths from sunlight, large quantities of energy cannot be extracted in this way. 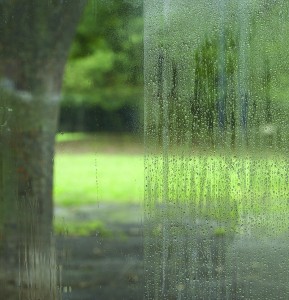 The function of titanium dioxide begins with light striking the photocatalyst and exciting an electron to a high-energy state. That electron is donated to another molecule that is then said to be reduced. This leaves a positive charge or “hole” on the titanium atom, which can oxidize another molecule (that is, remove an electron, the opposite of reduction). When this reaction occurs in air or water, oxygen reacts with excited electrons and hydrogen reacts with holes creating active oxygen, which can further oxidize alcohols, plant leaves and even cockroaches to carbon dioxide (Figure 1).

However, diligent research into water purification and remediation of atmospheric pollution using this reactivity from the mid 1980s hit an impasse when treatment of large volumes of water or air proved impossible.

A turning point came in 1989. Dr. Hashimoto, then a lecturer in the Fujishima research group, gazed at a yellowed toilet bowl on the University of Tokyo Hongo campus and the thought sprang to mind: if a photocatalyst could decompose a roach, then could it not also decompose the bacteria yellowing the toilet? “If you’re talking about energy production it’s pointless unless you can produce a large quantity, but for stain removal, it’s enough to decompose only a small amount of material. This was a major turning point,” recalls Professor Hashimoto.

Working through their connections the group quickly began collaborative research with TOTO Ltd., but there were difficulties at first. “At the time there was strong resistance to research partnerships between universities and industry. On top of that, we couldn’t say that we were carrying out research into toilet-yellowing at the University of Tokyo, so we carried out our experiments secretly on Saturdays and Sundays,” says Professor Hashimoto. 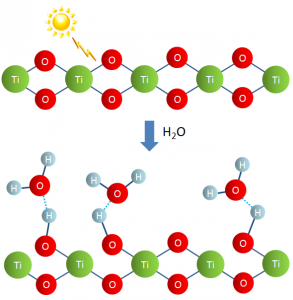 Through this collaborative research, a phenomenon called superhydrophilicity was discovered. A titanium dioxide-coated surface is extremely wettable, the surface water forming a flowing thin film (Figure 2). This was a new scientific phenomenon and the research was published in 1997, once again in the journal Nature.

This is a result of grease being decomposed by the photocatalytic effect, as well as the light-induced loss of oxygen from titanium dioxide which then reacts with water to form hydroxyl groups, increasing surface wettability. In this way, grime is washed away, and a long-lasting self-cleaning effect is maintained (Figure 3).

This titanium dioxide coating has been applied worldwide in places such as the Dallas Cowboys Stadium in Arlington, Texas, USA, and on the roof of Tokyo Midtown in Roppongi, Tokyo. More recently, it has been applied to the GranRoof of the Yaesu exit of Tokyo Station (Figure 4). “Seeing something you created being used in a place that you could call the new face of Tokyo is a great pleasure,” says a smiling Professor Hashimoto.

A craving for visible light

The problem with titanium dioxide is that of the energy contained in sunlight, only ultraviolet light is able to trigger the photocatalytic effect. As a result, it can only be used outdoors in places reached by strong ultraviolet radiation. The ability to use visible light would revolutionize its applications. 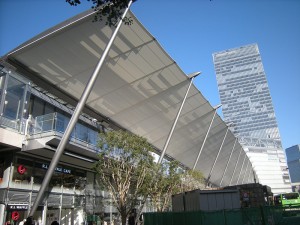 In 2007, Professor Hashimoto led a joint project with industry funded by the New Energy and Industrial Technology Development Organization (NEDO) that made significant progress toward this goal. This project set the exceedingly ambitious goal of achieving a ten-fold increase in photocatalytic activity under visible light. Market research suggested that this level of activity would be necessary in order to use titanium dioxide in weak indoor light: a goal based on dialogue with the market from the start.

“In a sense, it was probably a promise that a scientist should not make. Breakthroughs are not something you can aim for, but I promised that I would do it,” says Professor Hashimoto.

Up to then, it was generally accepted that “doping” the titanium dioxide by adding nitrogen to it would ease the formation of holes and enable reaction under low-energy visible light. However, the holes formed with this method have low oxidation potential (strength), and hence low mobility (the speed at which surrounding electrons fall into the holes, and create the appearance of the holes moving) resulting in no net increase in reaction efficiency. Making possible the use of visible light while maintaining the high oxidizing potential of titanium dioxide would not be made by a wave of the hand, but would require an entirely new principle.

Research progress while aiming for the market

The solution was to attach an iron- or copper-ion co-catalyst to the surface of the titanium dioxide. Excited electrons from titanium dioxide are transferred directly to the co-catalyst (termed photoinduced interface electron transfer) making the use of low-energy visible light possible. In addition, the co-catalyst can accept two electrons to reduce oxygen, greatly increasing the reaction efficiency of this stage. By the combination of these two effects, it was possible to realize a ten-fold increase in reaction efficiency over previous photocatalysts (Figure 5). 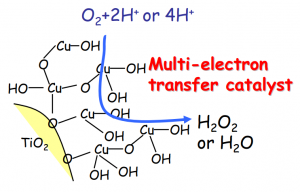 “This phenomenon was first observed using chromium, but because of chrome’s toxic nature it can’t be applied industrially. Inferring from a range of experimental data, in the end we arrived at iron and copper. Being able to pick out important information from background noise to discover what works is an important skill for researchers,” says Professor Hashimoto.

The notable characteristic of this project is the speed with which applications for this research were developed. Pilot production was pushed forward along with basic research, and application development was planned for completion in one year while product development was planned for completion in three. Titanium dioxide has come a long way in the last half-century. Now, under the strong leadership of Professor Hashimoto, its progress is accelerating.

“The new photocatalyst largely inactivates pathogenic viruses even when irradiated with fluorescent bulbs emitting no ultraviolet light. Trials are already being conducted at airports and hospitals, and its superior anti-bacterial and deodorant properties have been confirmed. During 2014 film, paint, glass, and other products using this new photocatalyst are scheduled for market debut,” says Professor Hashimoto.

New photocatalysts are expected find indoor uses in wallpapers and floorings, air purifiers and other appliances that can remove volatile organic compounds and allergens in the future. This new photocatalyst born from “dialogue with the market” is an excellent example of the possibilities of university-industry collaboration. 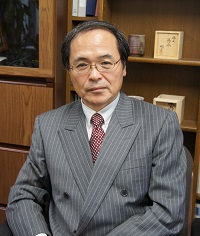