Lifelong walkers A cohort survey for a mobile old age

How do we stay healthy and guard against disability so that we can enjoy our old age? This simple question is a major challenge for a rapidly aging Japan. A research project started nearly ten years ago is taking a novel approach to this question by looking at the musculoskeletal system as a whole with a large-scale cohort study that aims to identify the risks and factors leading to musculoskeletal diseases in senior citizens. Using data collected with cooperation from throughout Japan, the researchers hope to realize a society of “lifelong walkers.”

A research topic for life

Project Associate Professor Noriko Yoshimura, who works in the Department of Joint Disease Research at the University of Tokyo Hospital’s 22nd Century Medical and Research Center, first came to the university in 2005. It was around this time that Professor Kozo Nakamura, a member of the hospital board and the Department of Orthopaedic Surgery, was preparing to introduce a new concept: locomotive syndrome (abbreviated as “locomo” in Japanese). 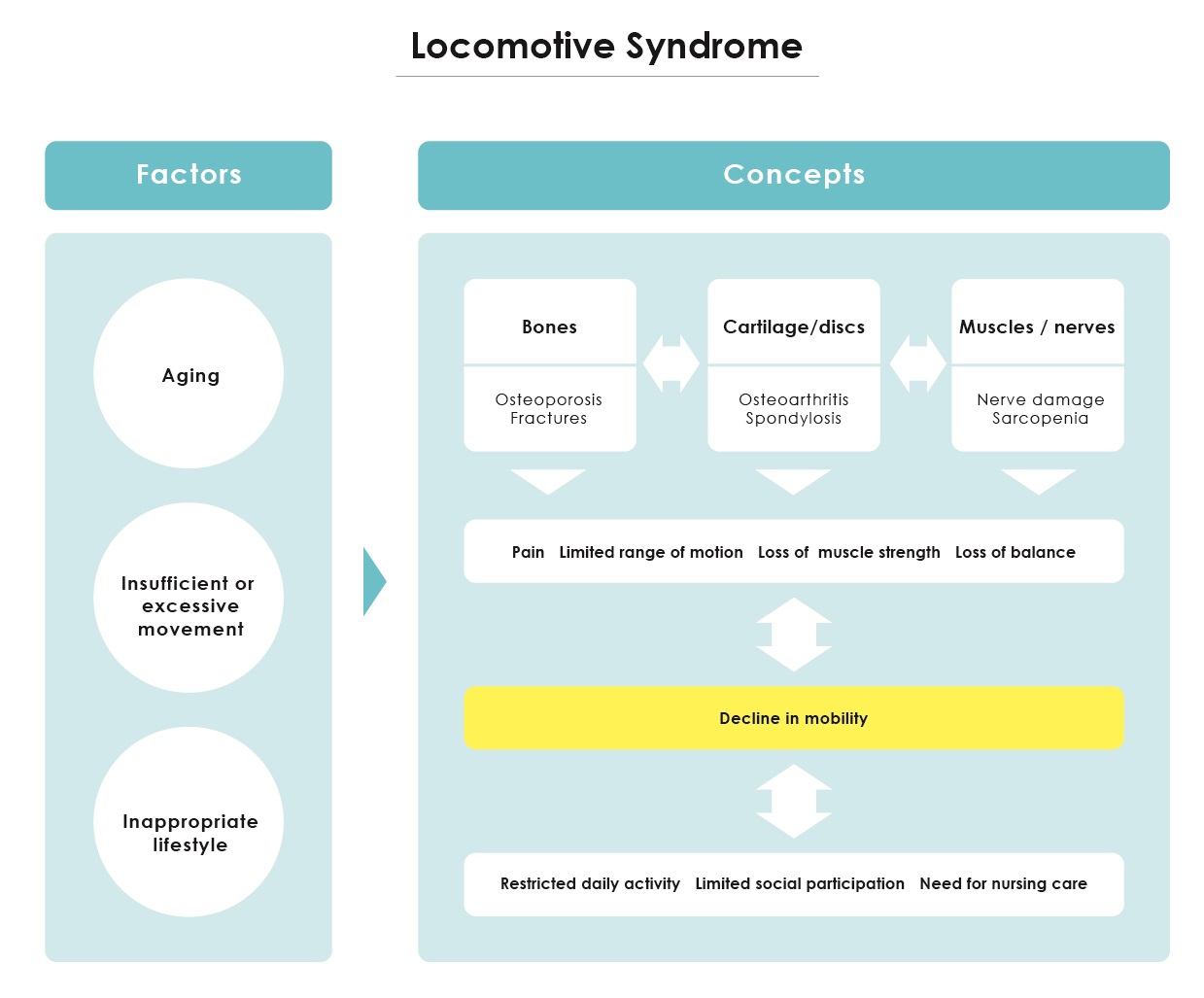 Locomotive syndrome refers to the condition of reduced mobility resulting from disorders of the locomotor system (the bones, joints, muscles and nerves), the progression brings with it a high risk of requiring nursing care (figure 1). Locomotive syndrome research aims to develop strategies for preventing the loss of motor function and subsequent disability by enlisting all orthopedic specialties associated with the locomotor system. Yoshimura enthusiastically embraced the idea. “This was an innovative and eminently rational approach for dealing with an aging society.”

Until that time, clinical research for the prevention of musculoskeletal diseases tended to be divided among specialized fields, for example, osteoporosis and related fractures, osteoarthritis, rheumatism, tumors, traumas and so on. There was little analysis from the perspective of the whole locomotor system. In Japan, moreover, some degree of lower back or knee pain rarely prompts people to visit a hospital unless they find it difficult to walk, or the condition noticeably worsens; even during regular health checkups, the bones and joints are rarely examined. There was a dearth of basic data on musculoskeletal diseases, especially epidemiological data such as prevalence, incidence, prognosis, correlation among diseases and risk factors.

Yoshimura’s specialty is preventive medicine. While researching the epidemiology of osteoporosis at the Department of Public Health at her alma mater, Wakayama Medical University, she had met many senior citizens discomfited by disorders of the locomotor system. As an internist unfamiliar with the field of orthopedic surgery, she was not personally acquainted with Professor Nakamura. But she fully grasped the importance of taking a cross-disciplinary approach to locomotive syndrome, as well as her responsibility given her experience as a researcher in a regional city.

Prevention starts from understanding the current situation. Yoshimura selected a cohort design, a type of epidemiological methodology that collects information on the prevalence, incidence and prognosis of diseases over time in particular population groups. She had conducted such studies before, and indeed viewed them as part of her life’s work. “My hope was that it would contribute to realizing a society where the elderly are able to walk throughout their entire lives.” Yoshimura committed herself to the new study, taking the first step on what would be the largest and longest-term survey she had ever undertaken.

What a large-scale cohort study reveals

The locomotive syndrome cohort study began in 2005, launched in Itabashi Ward, Tokyo, Hidakagawa town, in the mountains of Wakayama Prefecture, and Taiji, a coastal area also in Wakayama. It was named ROAD (Research on Osteoporosis/osteoarthritis Against Disability). “The audience for our research results was the whole of Japan. To convincingly translate our results to the whole country, we needed to collect data about the situation in urban and rural areas with different lifestyles.” The cohort consisted of 3,040 people – nearly four times larger than her previous Wakayama study. The examination of the ROAD study consisted of an individually-administered questionnaire and a wide range of assessments and measurements, including X-rays, covering all aspects of medical history and lifestyle. Yoshimura’s team spent three to four months in each location for the rural surveys, interviewing around 15 people a day. To accumulate follow-up data, this process would be repeated three, seven, and ten years after the initial survey. 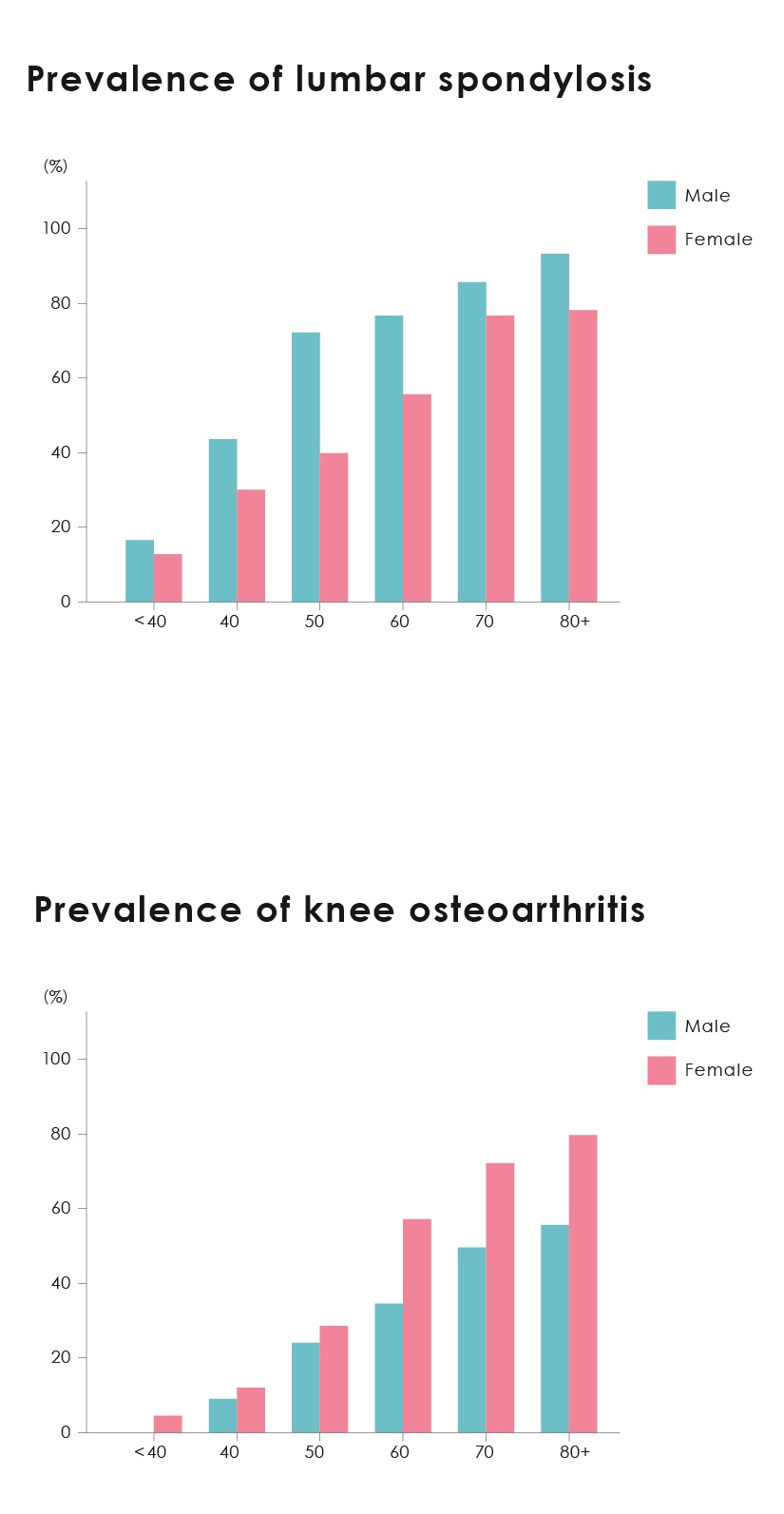 The initial 2005 survey revealed an unexpectedly large number of people met the criteria for locomotive syndrome. X-ray analysis showed that around 50 percent of those surveyed suffered from knee osteoarthritis, and over 70 percent in the lumbar spondylosis (lower back pain). Adding cases of osteoporosis meant some 47 million people, about two thirds of Japan’s population aged 40 and over, were at risk of requiring future support due to locomotive syndrome – a far higher rate than previous estimates (figure 2).

The follow-up surveys provided data on incidence rate – the proportion of the population that progress to locomotive syndrome and the proportion that progress from locomotive syndrome to requiring nursing care – and associated factors. Including data of related studies in other regions, Yoshimura found that every year, 1.11 million people nationwide end up requiring support or nursing care; that being underweight and overweight are both associated with eventually needing care; and that walking speed and handgrip strength, both indicators of physical performance, might serve as risk indicators.

The study also revealed that factors associated with the need for care, such as metabolic syndrome and cognitive impairment, and multiple factors associated with locomotive syndrome, tend to trigger one another. For example, it was found that there is a mutual relationship between hypertension and knee osteoarthritis: patients with high blood pressure have a higher risk of occurrence of knee osteoarthritis, and vice-versa (figure 3). Although these conditions are complicated and there are causal factors associated with each, Yoshimura says, “By unpicking the associated factors one by one and blocking the chain of disease progression, we aim to effectively block the factors that lead to the need for nursing care.”

A bond of trust 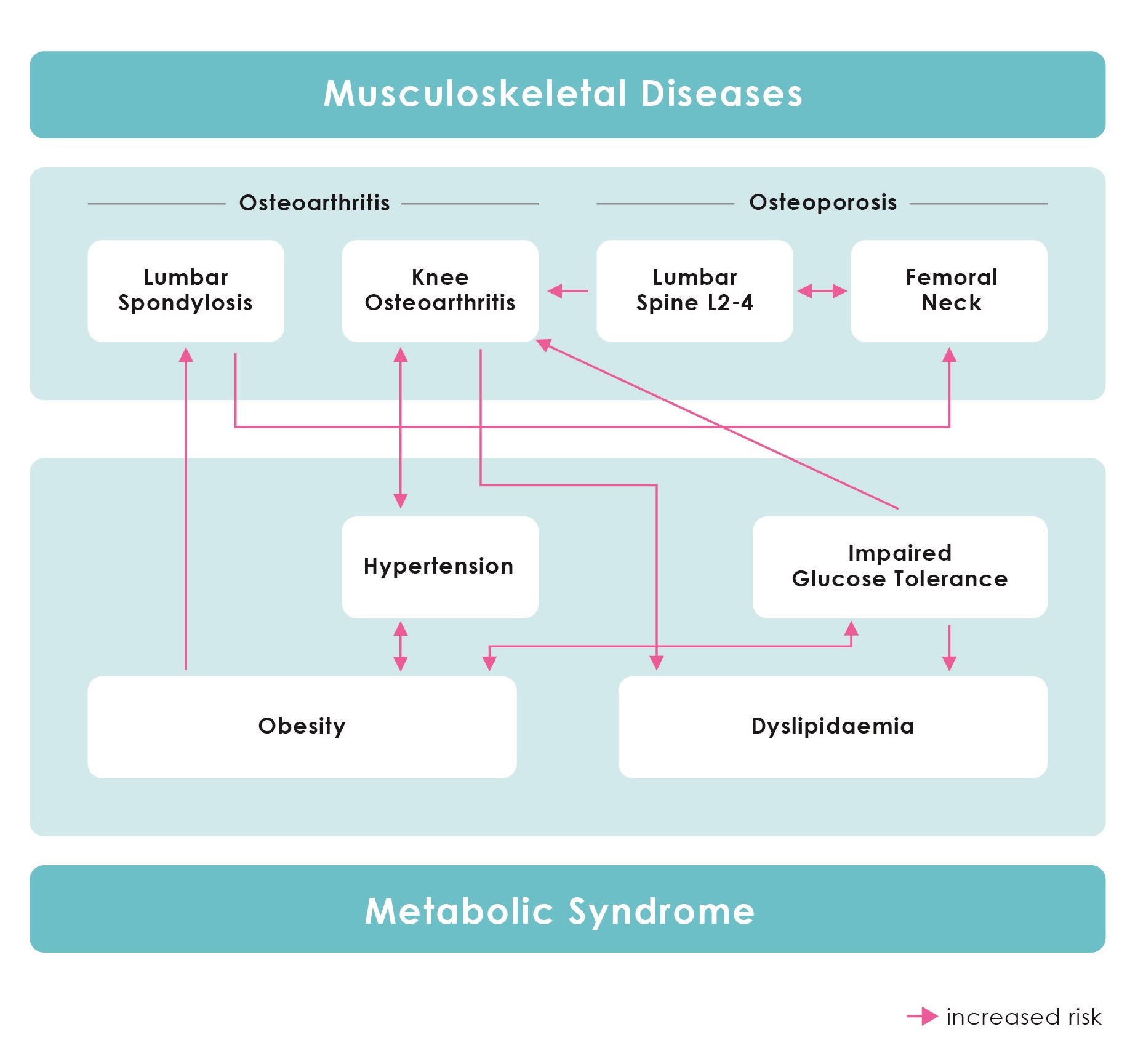 Figure 3. Conceptual diagram summarizing mutual associations among musculoskeletal diseases and metabolic syndrome components.
Arrows linking two diseases and/or symptoms indicate the presence of the first condition increases the risk of the second occurring. Various factors are interrelated such that each may induce the symptoms of the other. (From Yoshimura N, et al: Mod Rheumatol. 2014 Nov 20:1-11. [Epub ahead of print]).

It was thanks to close relations with the survey’s participants and their communities that the study yielded such valuable data and findings. The success of a cohort study hinges on continuity and thorough follow-up. In this case, 82 percent of the initial 3,040 subjects participated again in the second survey. In Taiji alone, the figure was 96 percent. Considering that changes of residence and advanced age inevitably preclude continued participation by all subjects, this follow-up rate is nothing short of astonishing.

Yoshimura’s connection with Taiji dates back to 1993, when the town hall asked her to conduct a bone mineral density survey and hold health education classes. Since then she has played a significant role in promoting the health of Taiji residents while also carrying out her survey research. Both the town hall and the townspeople themselves have provided robust support for the ROAD study, a project on unprecedented scale. The mountain town of Hidakagawa was also unstinting in its cooperation, while the Tokyo Metropolitan Institute of Gerontology assisted in gathering data from many subjects in urban Tokyo, where high population turnover poses a great challenge to follow-up surveys. This kind of local support is crucial to the success of such a long-term cohort study.

For that very reason, Yoshimura has committed herself to sharing the results of her survey work with those who helped make it possible. Not only does she hold frequent health education classes based on those results in the surveyed communities (photo), she also offers health consultations with individual participants in the study. On occasion she has diagnosed serious health problems and referred participants to other specialists. “I love elderly people,” she enthuses. The many senior citizens she has worked with since she was an inexperienced young intern have given her encouragement and helped her grow, she says, hence the passion she brings to her work today.

In Yoshimura’s view, from this point on it is critical to enlist central and regional government in efforts to tackle locomotive syndrome. For example, the systematic inclusion of lumbar and knee X-rays in regular health checkups could contribute toward its early prevention. Since this will necessarily entail extra costs and labor, it is all the more important to demonstrate that this effort is outweighed by the benefits to society. 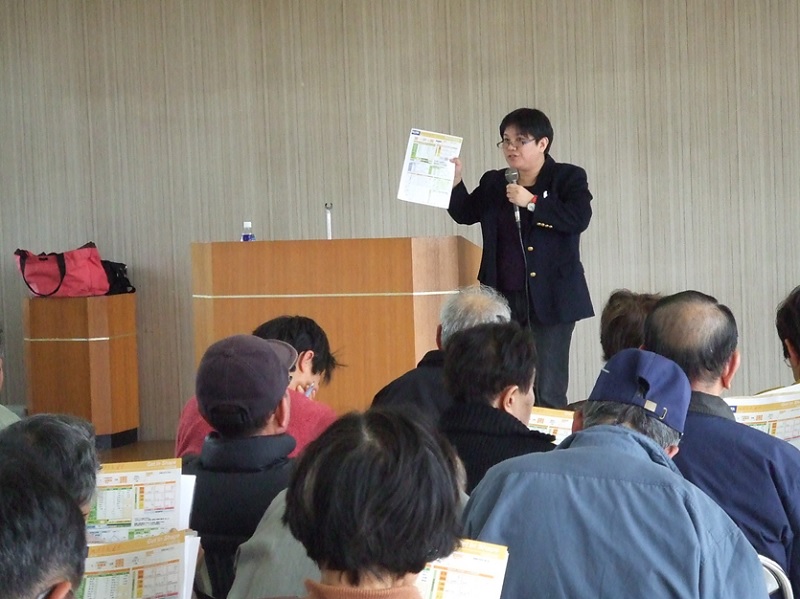 Photo. Professor Yoshimura explains the survey results to participants attending a health education class she initiated in Wakayama Prefecture.
© 2015 The University of Tokyo.

With the fourth survey scheduled to begin in 2015, plans call not only for more detailed analysis of the acquired data, but also for an expansion of the subject pool. The tenth anniversary of the launch of the cohort study also falls in 2015. Comparing data between first-year and current-year subjects in the same age range – for example, those in their fifties – should bring to light generational differences.

The value of a cohort study increases the longer it continues. Yoshimura continues her research on her home turf of Wakayama and in Tokyo, a city at the cutting edge of research. “A cohort study lasts as long as the researcher lives, so they need to be as long-lived as possible,” says Yoshimura. It has been ten years since she came to the University of Tokyo, but the lifework she began at Wakayama Medical University is far from over. If anything, the pace of Yoshimura’s lifelong walk on the “ROAD” is accelerating. 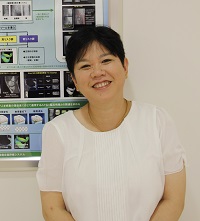 The University of Tokyo Hospital