Since their development in 1960, lasers have become an indispensable tool supporting our modern society, finding use in fields such as medicine, information, and industry. Thanks to their compact size and energy efficiency, semiconductor lasers are now one of the most important classes of laser, making possible a diverse range of applications. However, the threshold current of a typical semiconductor laser—the minimum electrical current required to induce lasing—increases with temperature. This is one of a number of disadvantages that can be overcome by using quantum dot lasers. Professor Yasuhiko Arakawa of the Institute of Industrial Science at the University of Tokyo has been researching quantum dot lasers for about 35 years, from their conception to commercialization.

An electron trapped in a microscopic box

Sunlight is composed of light of various colors. The property that determines the color of light is its wavelength, or in other words, the distance between two successive wave peaks or troughs. The location of the peaks and troughs in the waveform is known as its phase. As a laser emits light waves in a uniform phase at the same wavelength, the light can be transmitted as a beam over long distances at high intensity.

Light is emitted from an atom when an electron in one orbit around the atom’s nucleus moves to another with lower energy. The wavelength of this light is determined by the difference in energy between the two orbits, and since only certain orbits are permitted for each atom in nature, electrons will emit light at the same wavelength if the atoms are of the same type. 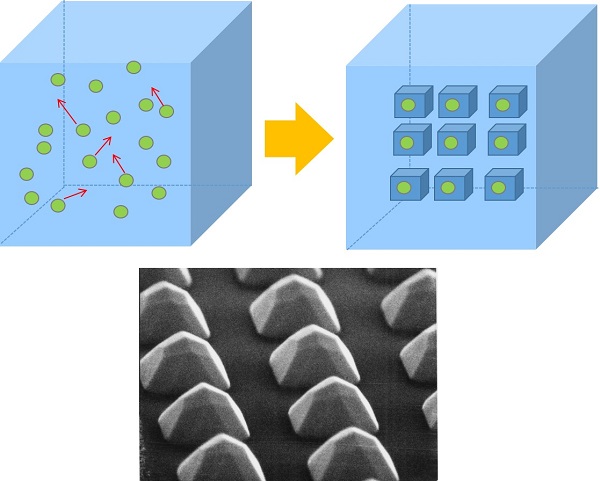 Figure 1: Freely moving electrons are trapped in quantum dots (top), electron microscope image illustrating the concept (bottom)
When an electron is confined in a small semiconductor box known as a quantum dot that is about the same size as the wavelength of the electron, the wave-like characteristic predominates, and the electron adopts a discrete energy value. As this property corresponds closely to the energy of electrons orbiting an atom’s nucleus, quantum dots are often referred to as artificial atoms. The electron’s energy can be regulated by altering the size, shape, and material of the quantum dot.
© 2016 The University of Tokyo.

In ordinary semiconductors, the electrons can be found at various energy levels, leading to light emission over a range of wavelengths. Additionally, as the temperature rises, electrons move about more freely, and the possible range of wavelengths grows. The number of electrons contributing to the generation of laser light at a single wavelength thus decreases and the threshold current increases.

Arakawa explains: “Electrons have dual characteristics, those of particles and waves. When an electron is confined in a small semiconductor box known as a quantum dot that is about the same size as the wavelength of the electron, the wave-like characteristic predominates, and the electron adopts a discrete energy value. Assembling a large number of quantum dots with an energy level that resonates with the wavelength of the laser makes it possible to very efficiently convert electron energy to laser light. Moreover, because each electron is trapped in a three-dimensional structure, its state remains unchanged when the temperature increases and the threshold current is no longer dependent on the temperature.” It would then follow that quantum dots can be used to make an ideal semiconductor laser (figure 1).

In 1982, Arakawa, who had just been appointed assistant professor, published a paper entitled “Multidimensional quantum well laser and temperature dependence of its threshold current” in collaboration with then-Assistant Professor Hiroyuki Sakaki. (Sakaki is now professor emeritus at the University of Tokyo and president of the Toyota Technological Institute.) This paper was the starting point for a global wave of quantum dot research over the next 35 years.

For Arakawa, designing a plan on how to create value for society is a concern that ranks with the importance of basic research, exhorting his students to “think like an engineer” and to “become a scientist with the mindset of an engineer.”

The near-infrared quantum dot laser, arising from his research that began with the theory in 1982, has found use in applications such as fiber-optic communications. However, the path to its development was never smooth. The size of the quantum dot that confines the electron is microscopic, on the order of several tens of nanometers. Arakawa reflects on when the theory was announced: “We had no idea how it could be made of course, or in fact whether it was even possible.” However, he did not give up.

At about the same time, in 1985, a French research group experimenting with the formation of multilayer, thin-film semiconductors in an unrelated study, made the chance discovery that quantum dots could form naturally. This discovery made the path a little smoother for Arakawa and his colleagues.

From industry-academia collaboration to a university-led venture company

In 1994, Arakawa and his colleagues fabricated the then-smallest quantum dots using crystals grown by metal-organic chemical vapor deposition—the first time ever employing this method. Meanwhile, researchers at Fujitsu Laboratories succeeded in making quantum dots that emitted near-infrared light at a wavelength of 1.3 micrometers, suitable for optical communications. One of those researchers was Mitsuru Sugawara, current president and CEO of QD Laser, Inc., where Arakawa now serves as technical adviser. 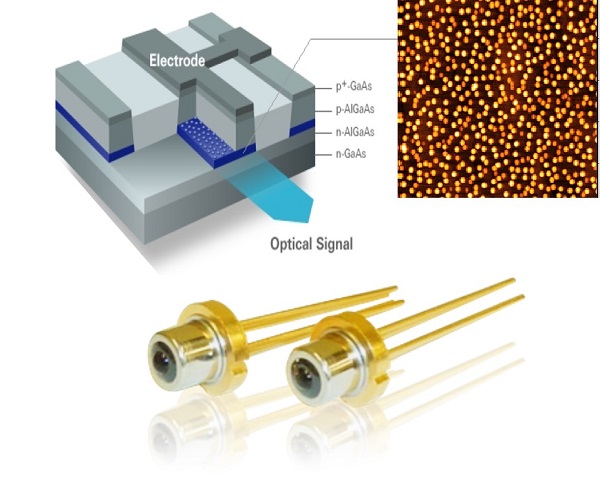 Figure 2: Cutaway schematic diagram and element of a quantum dot laser
Quantum dot lasers achieve low power consumption by reducing the threshold current needed for laser oscillation. They hold promise of becoming the supreme semiconductor laser, surpassing conventional ones by possessing outstanding attributes, among them: a threshold current with superior temperature stability, eliminating the need for recalibrations to accommodate changes in the surrounding temperature; and superb modulation characteristics that can carry a larger volume of information.
© 2016 The University of Tokyo.

Just as researchers were pursuing their dream of the quantum dot laser, the bubble burst on light research, and Sugawara and his team faced the possibility of having the plug pulled on their work. However, right around this time, Arakawa was chosen to launch a large national project supported by the Ministry of Education, Culture, Sports, Science and Technology. In cooperation with Fujitsu Laboratories and others, a then-groundbreaking center of collaboration among industry, government, and academia—the Nanoelectronics Collaborative Research Center—was established at the University of Tokyo, and Arakawa was appointed its first director.

In 2004, Arakawa and his colleagues finally succeeded in developing a quantum dot laser with a threshold current that had superior temperature stability, as proposed in 1982 (figure 2). The path by which scientific research yields products for use in society has conventionally involved progression from basic research through applied research, and finally to commercialization. However, believing in the importance of identifying society’s needs at the early research stage, Arakawa helped establish the startup venture QD Laser in 2006 with Sugawara at the helm, and became involved in the company’s research and development activities.

From 2011, when they were commercialized, to mid-2016, more than 3 million quantum dot laser chips have been shipped out, mainly for use as lasers for optical communications. Asked how the quantum dot laser will be used by society in the future, Arakawa makes two points: “I don’t think that it will immediately replace the existing semiconductor laser market,” and, “I’d like to target countries in which optical communications networks are yet to be developed and promote applications that maximize its advantages.” These applications include the use of lasers for measurement and processing. Their high thermal resistance and low noise also enable the use of lasers in large-scale integrated circuits that carry information with light rather than electricity. These so-called optical circuits will be indispensable to meet the challenge of fitting the massive computing power of today’s supercomputers, like Japan’s K supercomputer, into a palm-sized device in 20 years, and Arakawa is convinced that the quantum dot laser will play a lead role in that challenge. 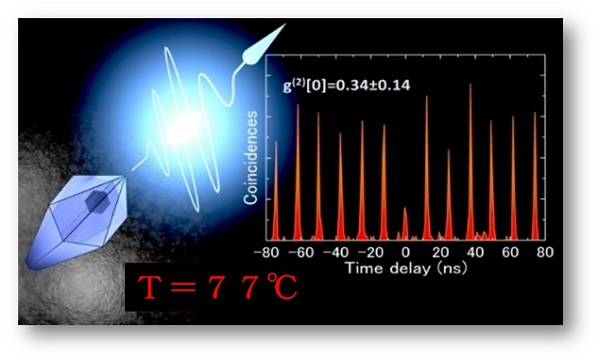 The uses for quantum dots are not limited just to lasers. They could also become a key technology in advancing quantum cryptographic communications and quantum computers. These require a single-photon source to systematically generate photons one at a time, a task for which the quantum dot is ideally suited. For the last 15 years or so, Arakawa’s research group has been approaching gallium nitride quantum dot research from the perspective of both condensed-matter physics and crystal growth technology, and in 2016, succeeded in fabricating a single-photon source that operates at the highest temperature achieved to date (77 degrees Celsius, hot enough to hard-boil an egg) (figure 3).

These wide-ranging applications have sprung from an approach of open innovation and proactive collaboration with different research laboratories, private sector companies, and other institutions. Associate Professor Mark Holmes was motivated to study single-photon sources in the Arakawa Laboratory by his own experience at Oxford University, which had a collaborative arrangement with Arakawa, who stresses that pursuing excellence in research is itself a means for fostering talent. Today, working in a research team with a strongly international flavor, Holmes says, “Our research into semiconductor devices would be impossible to do alone, but we are able to make headway in a cooperative environment that includes people from a variety of cultures and with different ways of thinking.”

The seed that was sown with the theoretical research of 1982 has blossomed into the quantum dot laser, according to the bold design sketched out by Arakawa. And with applications such as secure quantum cryptography that makes communications impossible to intercept and quantum computers that can operate at room temperature, who knows which buds produced from this seed will bloom in the future. 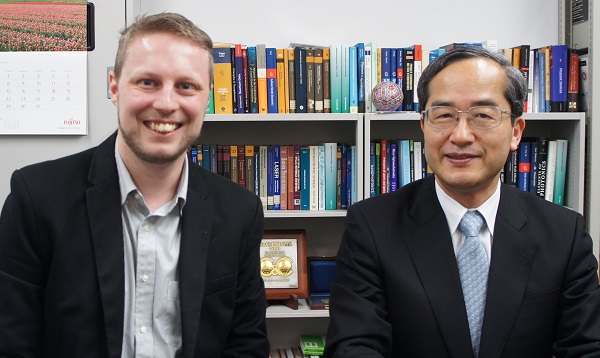