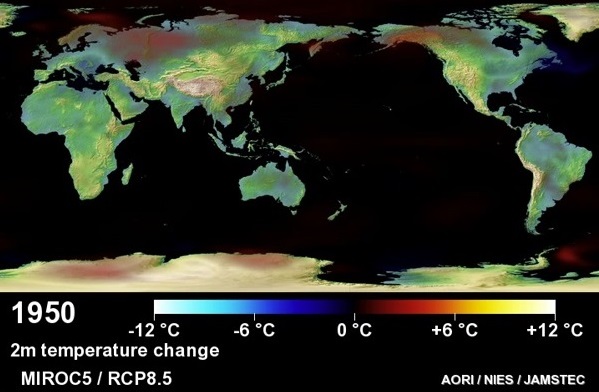 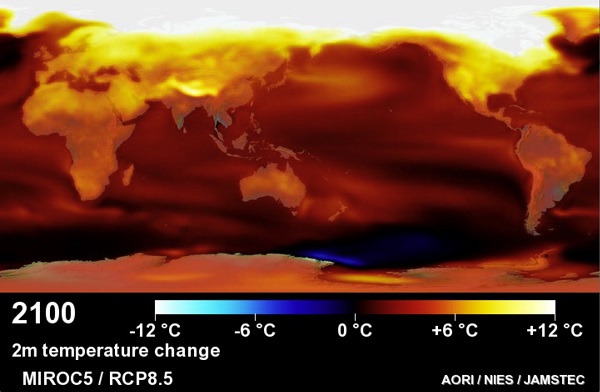 Global climate model MIROC’s prediction of temperature distribution. The progress of global warming from 1950 (left) to 2100 (right) is shown.

When, where and how much rain will fall has always been a matter of utmost concern for humankind since ancient times, but in recent years, with global warming and resulting changes in rainfall patterns, that concern has become all the more heightened. “There are two approaches to the future of weather forecasting,” explained Professor Yukari Takayabu. One is the climate model, a numerical simulation run on a supercomputer where the laws of physics describing the atmosphere and oceans, ice and land are represented in formulas. This method can, to a certain extent, predict future sea surface temperature or atmospheric circulation, but it still can’t indicate the characteristics of rain or clouds. Here the other method is essential: using satellites to gather data on rain in three dimensions, determining the physical laws that govern the characteristics of rainfall and clouds, and incorporating those findings in climate models.

For example, Takayabu’s research group analyzed 13 years’ worth of rainfall data collected from the Tropical Rainfall Measuring Mission (TRMM) satellite, which flew between December 1997 and June 2015, and identified several types of cloud formation during Japan’s early summer rainfall: 1) clouds with a small surface area that include those producing localized downpours, 2) clouds associated with extratropical cyclones and 3) clouds that cover a wide area with cumulonimbus at the center. Noting that the environments that result in these three types of clouds differ, the group used the climate model to forecast how those environments would change and to estimate how that would change these types of clouds. As a result, they predicted that in the future, most areas would see more type three clouds. Tohoku, Kanto and areas facing the Sea of Japan don’t see much of this type of rain currently, but this is forecast to increase markedly in the future.

“Bodies of clouds from 20 to 50 kilometers across and 50 to 100 km long centered on cumulonimbus clouds produce what is called training rainfall; these cause the torrential rainfalls of the end of the monsoon season, and can sometimes cause large-scale disasters. By combining observation data and the climate model, the workings of such phenomena can be more accurately understood, and we hope it will be possible to minimize the damage from torrential rainfalls,” said Takayabu.