A bird’s-eye view of disaster operations 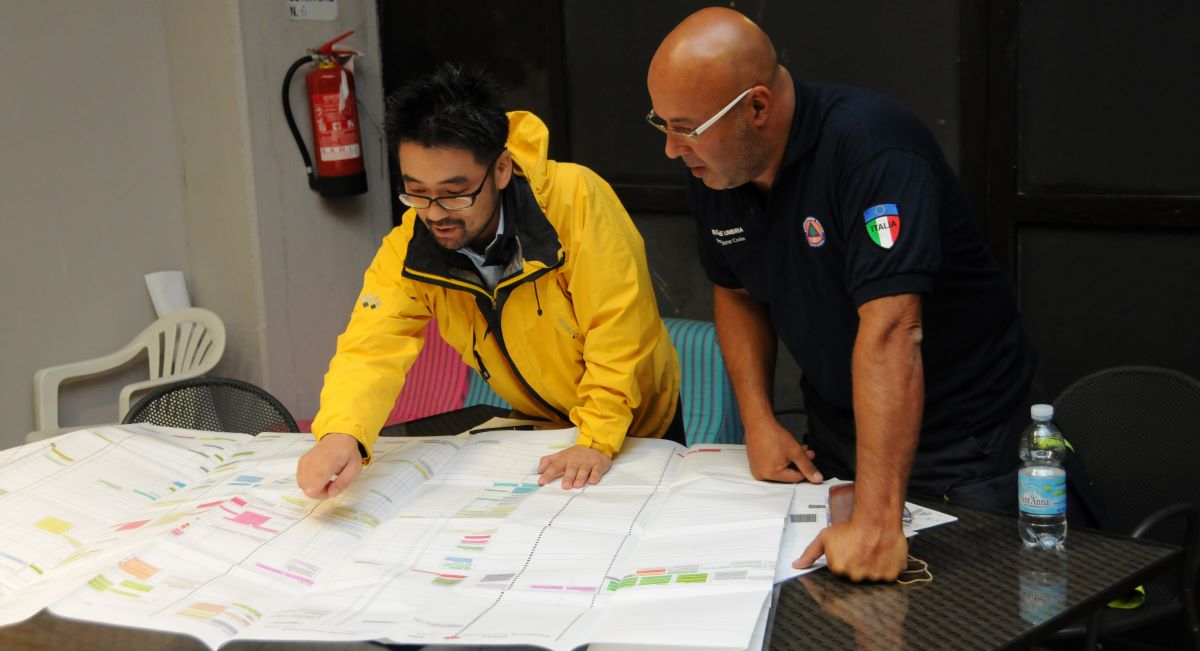 Associate Professor Muneyoshi Numada goes over a BOSS flow chart with a member of the civil protection department of Italy’s Umbria region, following the 2016 earthquake in central Italy. The chart builds on insights from previous disasters to render approximately 500 processes in 47 kinds of disaster responses.

The charts are printed on large poster paper (approximately 1 meter by 2 meters), with the horizontal axis marking the different stages when steps should be taken, from pre-disaster mitigation measures to actions that need to be taken one day, one week, one month and one year after the disaster.

The vertical axis shows the personnel who will carry out tasks for each step. They include organizations and individuals responsible for rescue and lifesaving operations, setting up and operating shelters, repairing and restoring damaged infrastructure and others. The layout gives a bird’s-eye view of “who, what, when”: what each person needs to do and when they should do it.

Associate Professor Muneyoshi Numada, instrumental in founding DMTC and involved in running the center now, explained: “It is important to get an overall picture of the disaster response process. For example, information indicating who is responsible for roads, sewage and water supply recovery, and where recovery efforts are making progress, is critical for people running a shelter. BOSS lets us see and grasp this overall situation.”

During training, each participant creates a flow chart covering tasks for each of their assigned roles, then goes through drills during a mock disaster.

Numada said, “Even in an unforeseen situation, the BOSS standard model provides a wider range of response capabilities for dealing with such circumstances. If we update and renew the data through repeated drills, we raise the accuracy.” He says they are currently working on an English-language version of the Japanese standard model and making models tailored to conditions in other countries.

Participants rehearse evacuation and operating a shelter in a demonstration simulating a flood amid a COVID-19 outbreak, carried out in cooperation with the city of Kawasaki, Kanagawa Prefecture, in June 2020.

Officials from the Shizuoka prefectural government and the town of Minamiizu take part in a training session in Minamiizu, Shizuoka Prefecture, in November 2019.