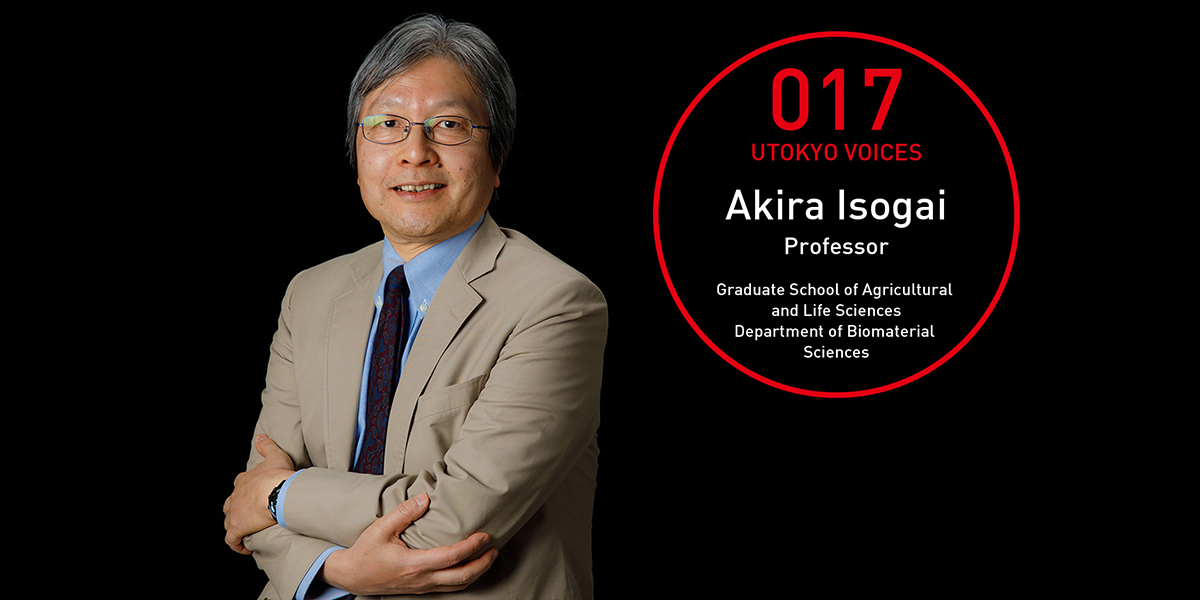 There is a “new dream material” that, if used in packaging film, enables packaging to be made virtually oxygen impermeable; if used in car tires, enables tires to be made much lighter and stronger; and if used in ink dispersant, enables pens to be created that don’t clog, for a smoother writing experience. Not only does the material excel in terms of functionality, but it can be extracted from timber, for low environmental impact. Moreover, unlike resources such as petroleum, there is an infinite supply available. This material, cellulose nanofiber (CNF), is a vegetable cellulose that has been finely broken down to nanoscale levels (one billionth of a meter), and seems as if it were created to meet the demands of the era.

This plant-derived CNF exhibits multiple functions and is attracting attention around the world. While there are several different ways of producing CNF, Professor Isogai achieved a world first by fully breaking down wood pulp fiber and developing a new kind of CNF from it that exhibited various different advanced functions. As a result of this, in 2015 Isogai, together with his joint developers, was awarded the Marcus Wallenberg Prize, the “Nobel Prize” of the forestry industry.

Isogai smiles uncomfortably when referred to as the “developer of a new dream material.”

“If I had intended from the outset to create such a material with these properties and functions, and if I had succeeded, then I would have had a lot to boast about now. In reality, my success stems from an academic interest and it was just by luck that the resultant material is so exceptional.”

Isogai and his team successfully developed this new method for producing CNF in 2006. At that time Isogai had aimed to create a completely new material from plants without using organic solvents or large quantities of energy that are harmful to the environment. He was not thinking about creating a material that would be useful for anything in particular.

“For example, research recognized with a Nobel Prize includes directed research that aims to solve known issues that need resolving, such as iPS cell research, or serendipitous research that accidentally emerges during experiments, such as the creation of conductive plastic. Our research falls into the latter category.”

Until Isogai enrolled in the University of Tokyo, he thought his strengths lay in physics and mathematics, but after enrolling he encountered many students who also excelled in these fields. While engaged in research into the development of bio-materials in the Faculty of Agriculture, he was fascinated to discover that trying out new things in this field led to new discoveries. In reality, Isogai’s success with CNF was just one of a number of trial-and-error discoveries.

“After our initial discovery, researchers at other universities and companies have found functions that hadn’t occurred to those of us in the Faculty of Agriculture and expanded the practical applications further and further.”

It was around that time that Isogai realized that one person thinking on his own does not amount to much. Corporations which at that time expressed an interest in his CNF and continued to develop materials are now starting to release products and new materials.

“We started related basic research in 1996 and it has taken us 20 years to produce something that can be put to practical use. Development of materials takes that long and requires the knowledge and networks of many, many people.”

While Isogai is not thinking about hitting a home run, he is planning to remain in the batter’s box. Isogai believes that even if the distance is meager, if he can hit the ball, it will be of some benefit to others. 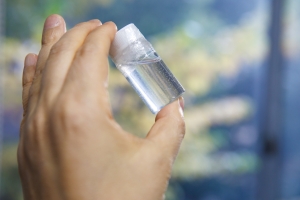 This transparent liquid contains the CNF developed by Isogai, made up of countless 3 nanometer-wide fibers completely broken down. Not only is it transparent, but it can readily be made water resistant and oxygen-impermeable. 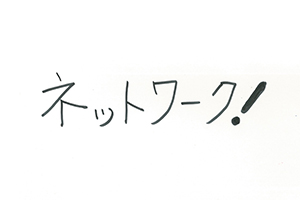 “CNF is superior when isolated, but research and development is more powerful with a network. I would like to continue my research placing great value on connections with other people whose yardsticks differ from mine.” [Text: Nettowa-ku (Network!)] 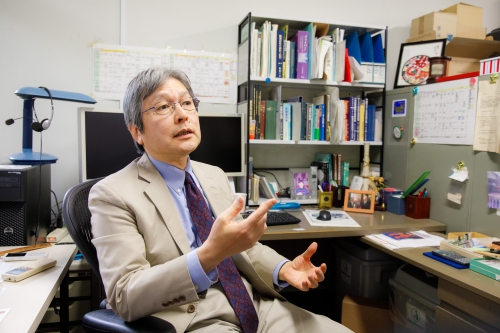 Akira Isogai
Obtained a Ph.D. from the Graduate School of Agricultural and Life Sciences, The University of Tokyo in 1985; took up current position at Paper Science Laboratory, Department of Biomaterial Sciences after working as a visiting researcher at the Forest Products Laboratory (US). Isogai continued his research into the development of biological materials using catalytic reactions, and successfully developed a new way of producing fully dispersed cellulose nanofibers in 2006. In 2015 Isogai, together with his joint researchers, Tsuguyuki Saito and Yoshiharu Nishiyama, was awarded Sweden’s Marcus Wallenberg Prize for this achievement. Awarded honorary doctorate from Aalto University (Finland) in 2016.