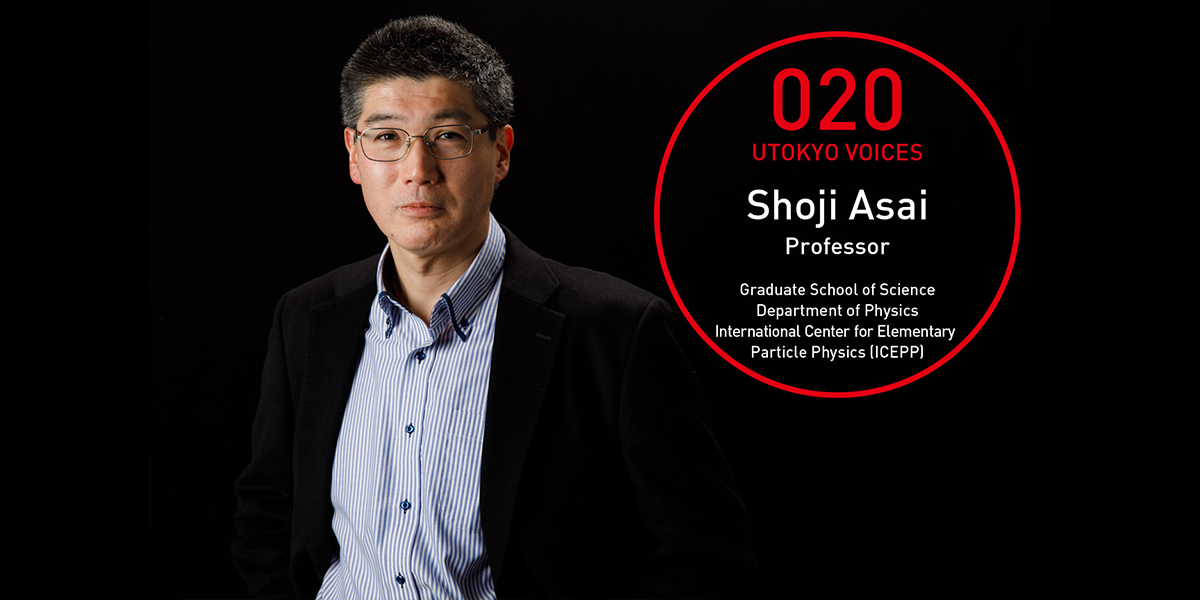 On July 4, 2012, news spread like wildfire of the discovery of the Higgs boson, something that scientists around the world had been waiting for with bated breath. This news meant that the last of the 17 bosons included in the Standard Model had been discovered, some 50 years after its existence was first predicted back in 1964.

The result was obtained by the European Organization for Nuclear Research (CERN), located in Geneva, using a Large Hadron Collider (LHC) with a 27 km circumference circular tunnel and the highest energy of any collider. Asai was a central figure in the discovery. “We found the origin of the evolution of the universe by discovering the Higgs boson, which gives mass to matter.”

Roughly 3,000 researchers from 38 countries were involved in the ATLAS detector that measures bosons, and Asai, as leader of the Japan team, contributed to this discovery of the century. “I saw the data analysis results obtained when protons collided approximately 1,000 trillion times in the LHC, and was convinced that this was the Higgs boson. I vividly recall the thrill I felt at that moment.”

Asai was interested in science even before starting elementary school. He built a radio in fourth grade and loved looking at stars through a telescope. While at high school, Asai read Hoshi no Butsuri (Stars) and drew a link between astronomy and physics for the first time. Up until then, Asai had intended to study astronomy, but “I thought it would be a good idea to study somewhat more broadly, so enrolled in the physics department.”

In his third year, Asai met Professor Shuji Orito, Nobel Prize winner Professor Masatoshi Koshiba’s top protégé, after which he set out on the path of elementary particle research. “My doctoral thesis was on measuring the lifetime of the lightest atomic element, positronium. At that time, experimental values and theoretical values deviated. I used a new method to measure the lifetime and discovered that the theoretical values were correct.” Asai had discovered the thrill of research.

One of the greatest current mysteries is that gravity is weaker than other forces by a factor of 40 orders of magnitude, which cannot be explained by modern theories. Asai believes that “This might be because the world is not 4-dimensional in terms of length, width, height and time, but 10-dimensional. I suspect that gravity exists in small invisible dimensions. Gravity may well increase if these dimensions were visible.”

“If, in a collision experiment, small dimensions became big enough to be visible, a black hole could be created. Understanding gravity at the elementary particle level will be a hot topic for researchers in the future. By approaching gravity through quantum theory, it may be possible to create a unified theory for the four fundamental forces that exist in nature. Unravelling this mystery is a project for the next 100 years.” It is as if the world of science fiction were becoming a reality.

Studying elementary particles requires a large number of researchers and substantial amounts of money, so is not possible without cooperation from around the world. For this reason, researchers work together only until they create an accelerator. After that they become rivals. “To win, you need both the kind of sense to know what it takes, and luck. Resources are limited so you cannot win by just trying everything willy-nilly. Sense can be acquired by conducting lots of experiments and acquiring a lot of hard-won experience.”

“Every basic science mystery that is resolved gives rise to ten new mysteries. We now know what happened up until 10-11 seconds after the universe was born. If we can understand supersymmetry and quantum gravity, we should be able to understand how the universe grew before that.” Asai is fired up to resolve the 100-year mystery. 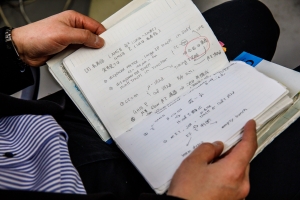 Asai makes notes immediately when he gets a flash of inspiration. He writes notes in the margins of books if he doesn’t have his notebook at hand. He sticks his notes in his notebook and rips out the parts of books he has written on so that he can stick those notes in his notebook, too. He occasionally looks back over his notes and rearranges them, and when doing so he usually wishes he’d done things differently and has regrets. However, he also finds that maybe one in ten of those ideas leads in some way to new research. 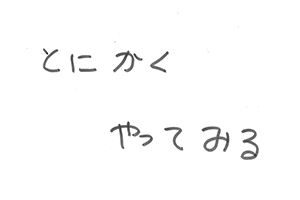 We become negative when we aren’t thinking straight and do not move forward, so we should just give things a try. Failure is extremely important. We can learn from our mistakes and thus take up new challenges. That goes for my students, too: I don’t get angry with them until they mess up three times. [Text: Tonikaku yattemiru (Try it anyway)] 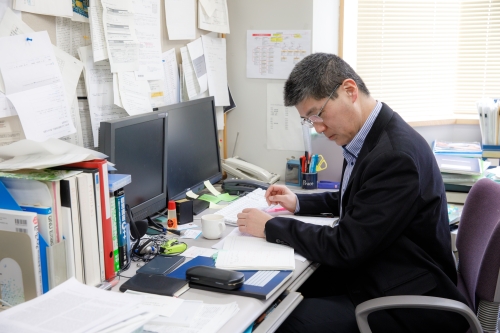