The Fruitful Meanderings of an “Optimization” Researcher｜UTOKYO VOICES 036 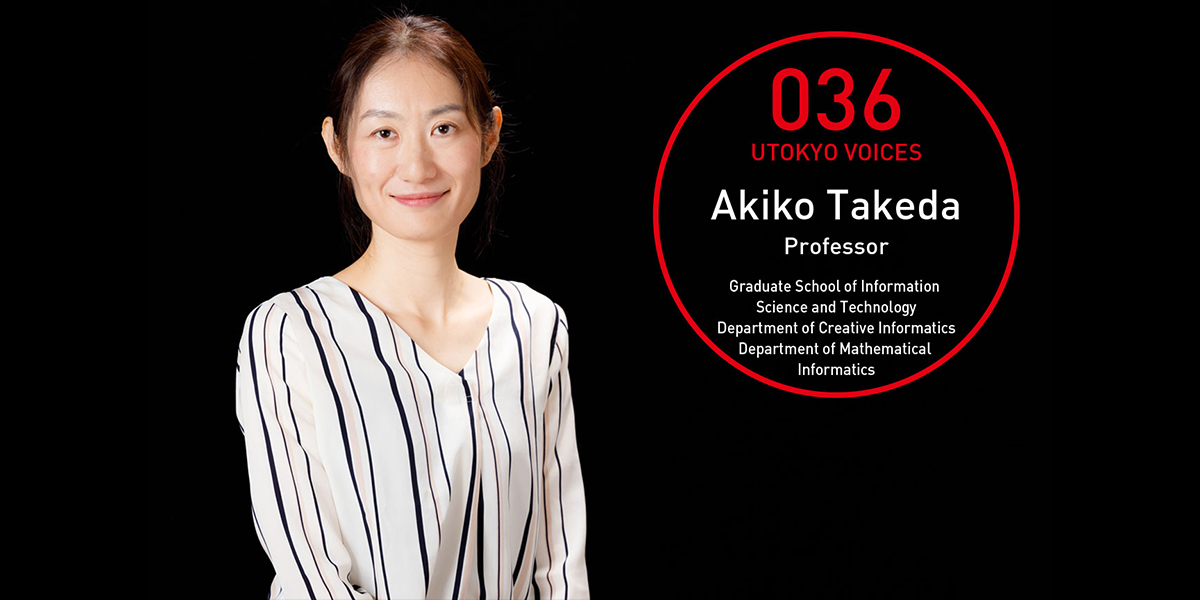 The Fruitful Meanderings of an “Optimization” Researcher

Professor Takeda was hopeless at studying. Once, in the lower years of elementary school, her teacher informed her parents in a letter that the whole class had fallen behind because of her. But her mother wasn’t worried. “She’s just growing up more slowly than the others,” she said.

Takeda followed her mother’s optimistic advice: “It’s all right. You just need to study twice as hard as them.” She studied, conscientiously, and before she knew it her grades had improved. “Evidently, I hadn’t grasped the art of studying as an elementary school pupil,” laughs Takeda.

This story of a “slowpoke” girl who grew up to become a leading Japanese researcher in mathematical optimization, a field of computational science, reminds us how unpredictable life can be. Mathematical optimization is about efficiently identifying, using computer technology, the most suitable of a countless range of options for achieving a certain purpose. To give an example, optimization technology supports route navigation systems, which instantly propose the most suitable travel path.

Mathematical optimization describes the complex aspects of the real world in mathematical language, while also dealing with uncertain factors, future predictions, and other unknowns. While there are no simple solutions to most of these problems, Takeda is involved in a particularly difficult genre of problems, where solutions are even harder to find.

After completing her doctorate, she was employed by a private firm, where she conducted optimization in the electric power field, working on power generation plans. Then, after returning to university, she boosted her expertise to the field of machine learning. “I like to do collaborative research with people from other fields. You realize things you’d never think of within the framework of your own specialization, and it’s fun to use tools that you didn’t know about.”

In fact, in the world of mathematical optimization, which is becoming increasingly specialized, relatively few specialists are engaged in research that crosses disciplinary lines. Within this context, the style of research pursued by Takeda, who has a penchant for interdisciplinary collaboration, serves as a lever for generating unique results.

Nevertheless, her venture into the world of machine learning was actually the result of a coincidence. “The person in the next laboratory happened to be a statistics researcher with time on his hands, so we talked about doing something together. We tried to find a field in which our respective specializations would create synergy, and we studied machine learning from scratch.” It was more of a “chance destination” than a strategic choice.

Taking only the part about a “slowpoke” child becoming a researcher of computational science at the University of Tokyo makes Takeda’s history read like the glorious story of an underdog who rises to success; however, as her career progressed, Takeda herself was not aiming to become a researcher at the University of Tokyo. “If we were to use optimization to identify the most efficient career path for a researcher, my meandering trail would seem far from ‘optimal’! For me, though, I don’t see my career as having meandered off track.”

While optimization technology cannot determine how people live their lives, it can be used to find better solutions to numerous challenges in society, including the development of artificial intelligence and asset distribution. Intent on exploring theories that can provide a basis for solving these problems, Takeda maintains her habit of intently jotting down formulas in a notebook. 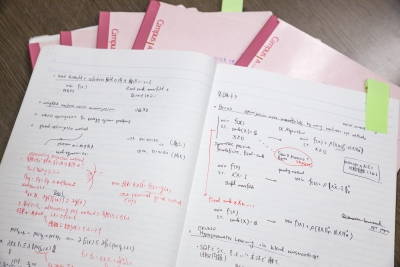 From her ideas to the content of her discussions, Takeda puts it all down in notes. “I like to process it in my head as I'm moving the pen over paper, and get those thoughts down on paper. Otherwise, I go and forget them!” 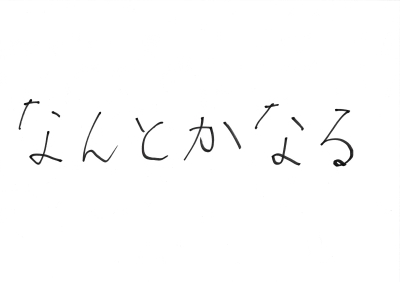 Things will work out (nantoka naru)
Your research won’t progress if you’re worried about how it will turn out. Takeda is optimistic and easygoing: When she has an idea, she thinks, “Yes, this will work!” and when she hits a dead end, she knows, “Things will work out.” 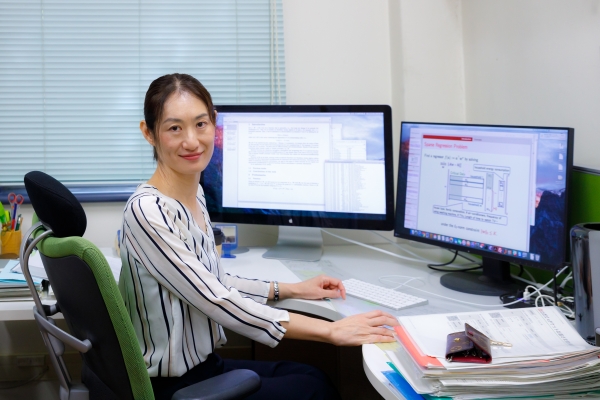 Began work as a researcher at Toshiba Corporate Research & Development Center after earning a master’s degree from Keio University and a doctorate from Tokyo Institute of Technology. Worked as an assistant at Tokyo Institute of Technology, full-time lecturer and associate professor at Keio University, associate professor at the University of Tokyo, and professor at the Institute of Statistical Mathematics, before taking up her current post in 2018. From 2016, held the concurrent post of Team Leader in RIKEN’s Center for Advanced Intelligence Project. Builds mathematical optimization models to support problem solving and decision making in real society, develops algorithms, and conducts theoretical analysis of models.