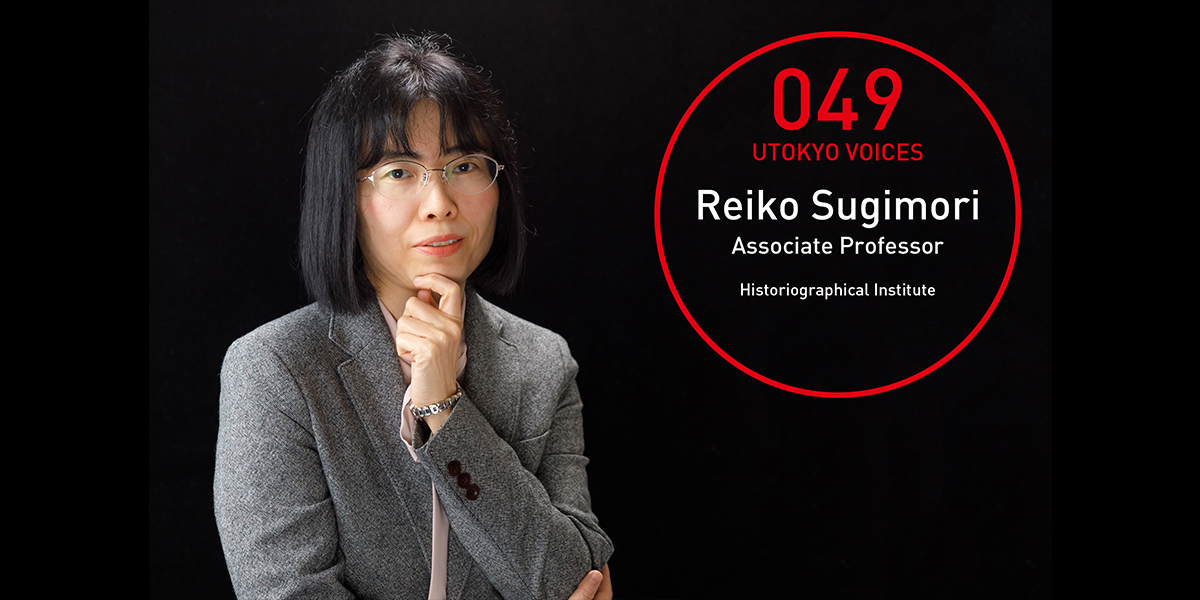 Making the Invisible Visible through Careful Reading of Historical Materials

The Red Gate (Akamon) of the University of Tokyo is set back from the road. Passing under it, Professor Sugimori explains: “The red gate was built in 1827 by Maeda Nariyasu, the feudal lord of the Kaga Domain, to welcome Yohime, daughter of Shogun Tokugawa Ienari, as his wife. At that time, the purpose of this space was to act as a firebreak.”

In fact, she explains, there are also some historical materials written by people who survived earthquakes and fires here. The invisible thread that is history stands revealed before our eyes. “The scene we’re looking at now starts to look different, doesn’t it?” says Sugimori quietly.

Having developed an interest in urban history as a student, Sugimori found a position at the Historiographical Institute, where she was involved in compilation and research for Shichu Torishimari Ruishu (Collected Records of City Law Enforcement), a sourcebook on administration in the city of Edo. After that, she worked on the diary of Gesshin Saito, a leading intellectual of the day known for his authorship of Edo Meisho Zue (Guide to Famous Edo Sites). This is a valuable source containing information on the duties of town leaders, their everyday lives and those of their families, and events and happenings in the city, such as festivals and fires.

Gesshin Saito lived in Edo during a period of turmoil. “Gesshin lived until 1878, so his diary gives us a glimpse of how Edo evolved into Tokyo. It also includes an account of the great earthquake of 1855, which sent shockwaves through the shogunate and society.

The intervals between large earthquakes are long, spanning more than one hundred years. Since the 2011 Tohoku Earthquake and Tsunami, the need for long-term verification has been strongly emphasized. Therefore, the University of Tokyo has ramped up its research collaboration between the Earthquake Research Institute, which examines earthquake and volcano activity from the perspective of natural sciences such as seismology and volcanology, and the Historiographical Institute, which compiles sourcebooks based on surveys, collection, and research related to Japanese historical materials. In 2017, the two research institutes worked together to launch the Collaborative Research Organization for Historical Materials on Earthquakes and Volcanoes. Sugimori also serves as an associate professor in that organization.

At the organization, Sugimori is compiling a database of past earthquakes from historical materials, but she also made a new discovery while working on the project.

The collection of Shimazu clan documents stored in the Historiographical Institute contains a picture depicting a large earthquake and fires in Edo. Since the date and legend are missing, it was thought that directly ascertaining when and for what purpose it was written would be difficult.

However, Sugimori, who was closely involved in reading and analyzing Gesshin Saito’s diary and historical materials related to earthquakes, realized that clues to this puzzle could be found both in and outside of the picture scroll. Sugimori carefully compared the materials to show that the scroll was written by lord Shimazu Nariakira of the Satsuma Domain to inform the Konoe family, a noble family with which he had a close relationship, about the state of damage suffered by the Shimazu family and the confusion in Edo following the Ansei Edo earthquake. As a result, the scroll has also become a valuable material for conveying the state of destruction and recovery of the city after the earthquake.

In the middle of the scroll is an illustration of a woman, of apparently high status, who has evacuated from the Shimazu residence. Although there are no explanatory notes, Sugimori says, “I think this person is Atsuhime, waiting while the preparations for her marriage with shogun Iesada are underway at the Tokyo mansion of the Satsuma feudal lord.” She also explains the importance of the picture scroll as a historical material that reflects the situation at the end of the Edo period.

By consolidating the picture scroll with other materials, just like invisible ink, the invisible was made visible. That is the genius of historical study.

With a wry smile, Sugimori explains: “What I’m doing is actually dreary, repetitive stuff, but it builds up bit by bit into an understanding of what happened.” She knows the importance of accumulating consecutive small efforts. 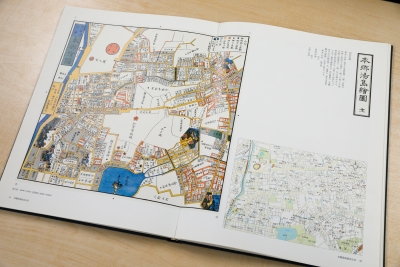 Edo Kirie-zu (Sectional Maps of Edo)
Picture maps are essential for grasping the positional relations and sense of distance from place names that appear in early modern historical materials. “This book was compiled from the Owariya edition of the Edo Kirie-zu (Sectional Maps of Edo). The Owariya edition is colorful and fun to read, and it’s good to have today’s map on the same spread.” 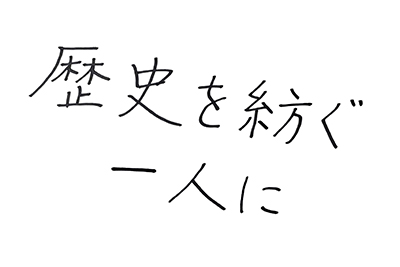 [Text: Rekishi wo tsumugu hitori ni (“Become a weaver of history”)]
“All academic disciplines, not only history, have their foundations in knowledge accumulated over time. By adding new results to this, we too weave the history that will be passed on to the next generation. So I want to become a “weaver of history.” 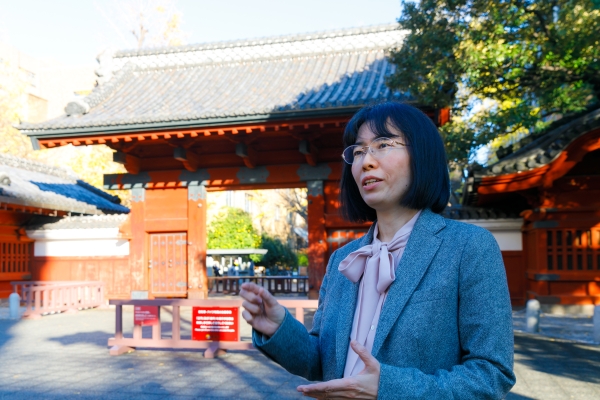 Completed master’s program at University of Tokyo Graduate School of Humanities and Sociology in 1994, then worked as an assistant at Historiographical Institute, University of Tokyo. Became an assistant professor at the Institute in 2006. Earned a doctorate (literature) in 2007 before assuming current post in the same year. Involved in compilation and research for key sourcebooks on life in Edo, including Dainihon Kinsei Shiryo Shichu Torishimari Ruishu (Early Modern Japanese Materials: Collected Records of City Law Enforcement) and Dainihon Kokiroku: Saito Gesshin Nikki (Old Diaries of Japan: The Diary of Gesshin Saito). Publications include Kinsei Nihon no Shonin to Toshishakai (Merchants and Urban Society in Early Modern Japan) (The Association of Japanese University Presses, 2006). Has also served as associate professor in the University of Tokyo Collaborative Research Organization for Historical Materials on Earthquakes and Volcanoes since 2017.