The "otherness" of when setting out: the starting point of all research｜UTOKYO VOICES 058 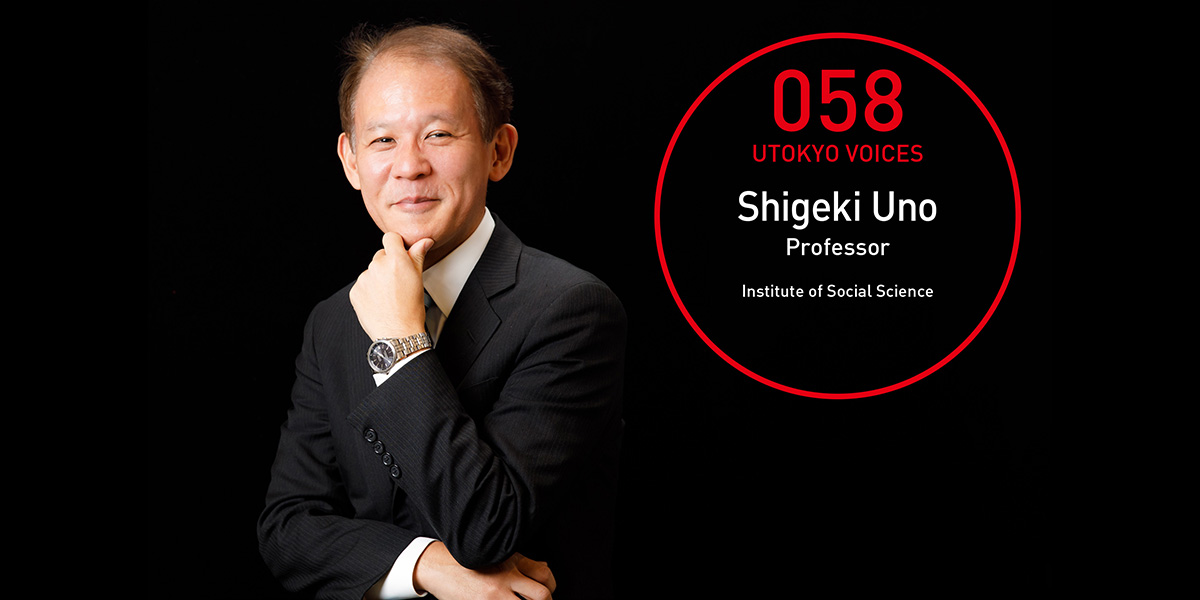 The "otherness" of when setting out: the starting point of all research

When he entered university, Professor Uno wanted to be a diplomat. That ambition changed in the late 1980s, when he took part in the Japan-America Student Conference. He was impressed by the way the American students at the conference spoke boldly about democracy and human rights, while the Japanese students, in contrast, seemed to mouth only hastily prepared slogans. “Our students couldn’t talk about democracy,” Uno reflects. “Even when they visited Hiroshima, they had nothing to say. I felt keenly that we needed to study more.”

When Professor Takeshi Sasaki, who is Uno’s advisor, told Uno to find a thinker he wanted to research, Uno selected Alexis de Tocqueville. At the tender age of 25, in 1831 Tocqueville traveled to the newly emerging democratic nation, the United States of America. He spent nine months traveling around the country, opening his eyes to democracy. At the end of his journey, Tocqueville wrote Democracy in America. Uno felt that Tocqueville, with such a compelling personal story, and having been about the same age as Uno was at the time, was someone he could research and relate to.

Americans tend to see democracy as an unmixed good, but Tocqueville warned that it had its problems. Uno felt that this ability to maintain a critical eye also accorded well with his own personality. To pursue his research further, Uno visited the town of Tocqueville’s birth.

“Tocqueville looked at everything from both a French and an American perspective,” Uno explains. “The word ‘democracy’ meant something very different to the French than to the Americans. I thought it would be interesting to compare Japan’s perspective with those two, and I found that many of Tocqueville’s criticisms of French democracy are valid for modern Japan. I felt this was a man I could research, and my research stance remains the same to this day.”

After studying political thought in courses on law and politics, Uno attended Chiba University, then started working at the Institute of Social Science. The Institute is passionate about research on labor issues and disparity, so Uno added these two subjects to his own ongoing research.

“In 2005 I joined an Institute-wide project called the Social Sciences of Hope,” Uno recalls. “I thought about its relationship to Tocqueville as I looked at growing social disparity and the alienation it engenders and carried out research on how we can forge new connections among people.”

Another major change was that Uno decided to conduct a regional survey in Kamaishi, Iwate Prefecture, prompted by a visit to that city as part of the Social Sciences of Hope. Uno continues to work on that survey today. It may seem unusual that a researcher in political thought would be carrying out a regional survey, but Tocqueville traveled to the United States and talked to a wide range of people. Though he did not plan it that way, Uno was following in the footsteps of Tocqueville.

“Whenever I come back from Europe or the United States, I immediately go to that region and work on the survey,” Uno explains. “It is only when we compare differences that we begin to understand the society we are in. That is the teaching of Tocqueville, and a truth that I will always tell the world about.”

Uno has always believed in the importance of engaging young people in politics. In 2017 he offered a series of lectures in dialogue format, targeting female junior-high-school and senior-high-school students and other youth. Drawing strength from the young women’s awareness and power of self-expression, Uno published Mirai o Hajimeru: Hito to Issho ni Iru Koto no Seijigaku (Starting the Future: The Political Science of Being with Others), which became a great topic of discussion.

Uno explains: “Going forward, one thing I would like to do is to tackle a problem worked on by Shigeru Nambara and Masao Maruyama, two pioneers in the history of political thought. That is a systematization of the problem of democracy and religion, encompassing Europe, the United States, Japan and if possible China.”

“I’m in my 50s; it’s make-or-break time,” says Uno. As he continues his regional survey, Uno is striving to parlay his experiences into a universal theory. 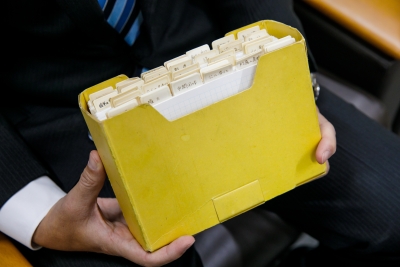 Research cards from Uno’s Kyoto University days
Long ago, Uno recorded his research results on individual cards. Later he came to rely on them less often. More recently, however, Uno has once again come to appreciate the advantages of research cards. By working his card system, Uno discovers unexpected relationships, hatching a wide range of ideas. 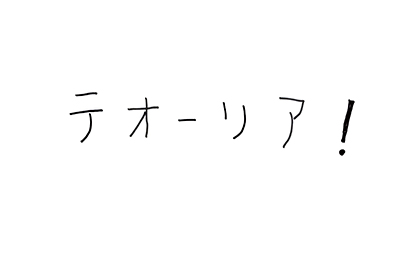 [Text: “Theoria”]
The classical Greek word theoria is the root of the modern word “theory.” One story has it that theoria originally referred to the practice of sending messengers from one ancient Greek city-state to another. Just as messengers would travel to a different polis and observe the differences between that polis and their own, the starting point of all learning is the act of journeying to a different place and being surprised at the differences one finds. 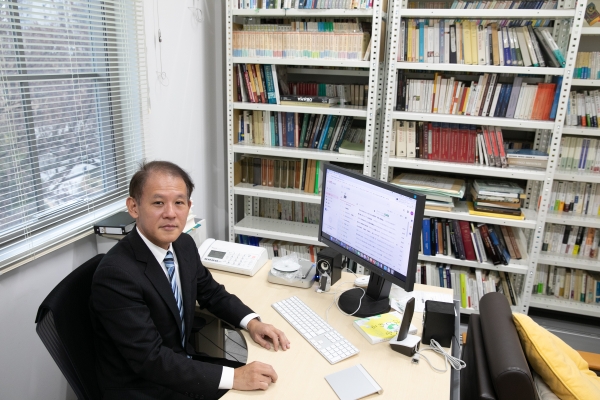 Completed Doctorate in Law and Politics at the University of Tokyo in 1996. In 1999 became an assistant professor at the Institute of Social Science, the University of Tokyo. Appointed associate professor at the same institution in 2007 and professor in 2011. Publications (all in Japanese) include Democracy o Ikiru: Tocqueville niokeru Seiji no Saihakken (Living in the Age of Democracy: Tocqueville' s Re-discovery of the Political), (Sobunsha, 1998); Seiji Tetsugaku e: Gendai France tono Taiwa (For Political Philosophy: Dialogues with Contemporary French Political Philosophers), (University of Tokyo Press, 2004); Tocqueville Byodo to Fubyodo no Rironka (Tocqueville: A Theorist of Equality and Inequality), (Kodansha Sensho Metier, 2007); Watashi Jidai no Democracy (Democracy in the Age of Meism), (Iwanami Shinsho, 2010); Minshushugi no Tsukurikata (How to Make Democracy), (Chikuma Sensho, 2013); Hoshushugi towa Nani ka: Han France Kakumei kara Gendai Nihon made (What is Conservatism? From the Resistance to the French Revolution to Modern Japan), (Chuko Shinsho, 2016); and Mirai o Hajimeru: Hito to Issho ni Iru Koto no Seijigaku (Starting the Future: The Political Science of Being with Others), (University of Tokyo Press, 2018).