Some 100 elements make up over 100 million compounds:
A quest to find the universal principles that define their properties｜UTOKYO VOICES 074 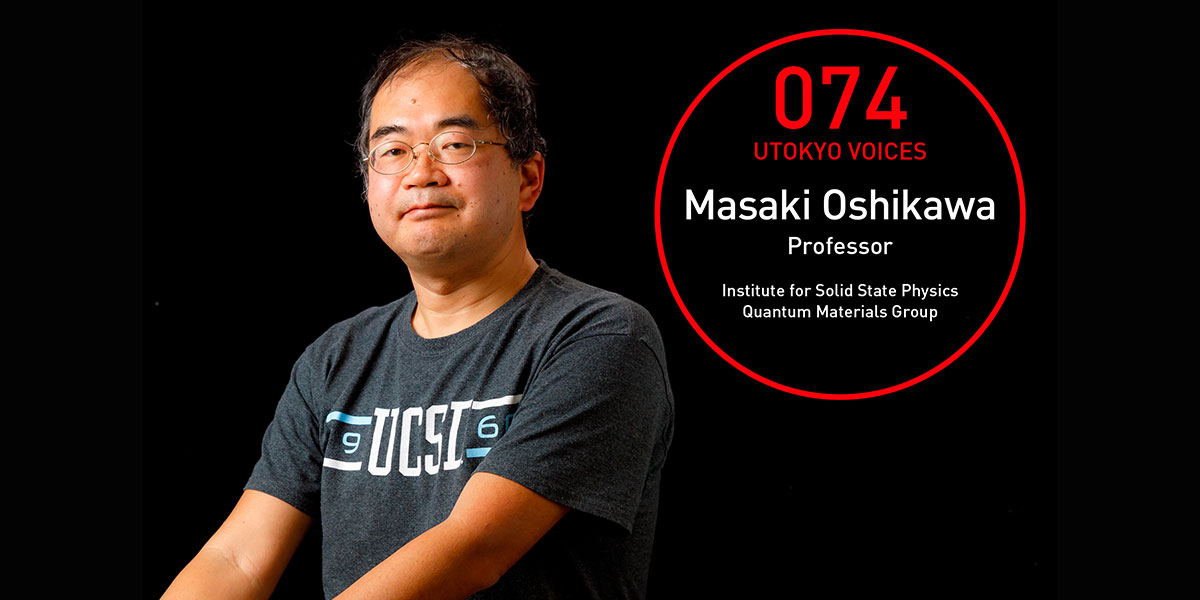 Some 100 elements make up over 100 million compounds: A quest to find the universal principles that define their properties

Have you ever wondered how many different substances exist in this world? Maybe 100 thousand? Or 1 million? In fact, there are more than 100 million compounds that make up our world. (According to compounds registered in the Chemical Abstracts Service)

What is truly amazing is the fact that it takes a mere 100 plus elements to make up all these compounds. Furthermore, depending on its physical environment (which may include factors such as temperature, pressure, and magnetic field), more often than not, the same substance may transition from insulator to metal, metal to superconductor. Professor Masaki Oshikawa’s research field is condensed matter theory, which tries to understand these diverse properties of matter through the basic principles of physics (using methods such as quantum mechanics and statistical mechanics) and chemistry.

A top can be made to spin at different speeds, depending on how it is thrown. But in physics, spin refers to the quantity of an electron’s intrinsic angular momentum, and can be only values that are half-odd-integers or integers. Haldane’s conjecture states that the properties of a substance are determined by whether the spin is an integer or not.

In his first year in graduate school, Oshikawa took part in a “Condensed Matter Physics Summer School” mainly for graduate school students. This was a real eye-opener. According to Oshikawa, “In relation to Haldane’s conjecture, at the time, I realized that structures that had been established only for the spin value of one could be expanded to cover any integer spin value.” Two years later, Oshikawa presented his findings in his first single author academic paper, which included the discovery that odd and even integer spin particles have different properties, which was not present in Haldane’s original conjecture.

Nearly 20 years later, Oshikawa discovered that the so-called “Haldane gap” condition found in odd number spins was actually a symmetry protected topological (SPT) phase. Thus, he was able to solve the mystery of the difference between odd and even integer spin particles, which was raised in his first paper. When F. Duncan M. Haldane and others won the Nobel Prize in Physics in 2016, the Nobel Foundation cited research papers by Oshikawa and his collaborators in the explanatory material.

Oshikawa says that he loved math and science as an elementary school student. In junior high school, he joined the physics and chemistry club and was busy conducting experiments day and night. As an undergraduate at the University of Tokyo he specialized in statistical mechanics at the Department of Physics and in graduate school. He says, “I wanted to see how individual atomic particles interact with each other, and how they behave as a whole in order to understand complicated phenomena.”

His quest gathered further momentum while a post-doctoral fellow at the University of British Columbia in Canada, where he went after serving as a research associate at the Department of Applied Physics in the University of Tokyo. According to Oshikawa, “My boss in Canada was advancing a mathematical approach to ‘quantum field theory’ which was built from elementary particle theory. It was a condensed matter theory style that strongly resonated with me. Soon a variety of research projects were taking off, just like that.”

It is possible to create different compounds by changing the atoms they are made of. The choices are limitless, but the compounds can be roughly separated into groups that demonstrate similar traits. “We pursue the underlying universality common to various substances and phenomena. I think that is what our science is all about. For example, metals like gold, silver, copper, and aluminum share common properties. When we classify them, we find metals that that don’t seem that different at first glance. But their spin values could be different – an even number and an odd number, for example. A major goal is to define how these differences relate to different properties.”

According to Oshikawa, that is not all. The beauty of solid state physics is “how seemingly different phenomena can be explained using the same concept or same math. It is exciting to discover an unexpected connection that ties things together. Our work not only enables us to understand the properties of substances that already exist, but in the future, we could be designing new substances by combining different atoms.” 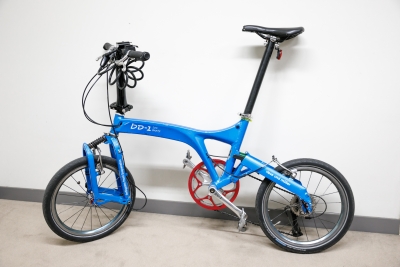 Bicycle
Oshikawa bought this folding bicycle, BD-1, 11 years ago. “I take it with me to seminars and trips here in Japan and overseas, if I think there might be time to take a spin. It has traveled with me to 20 countries so far.” 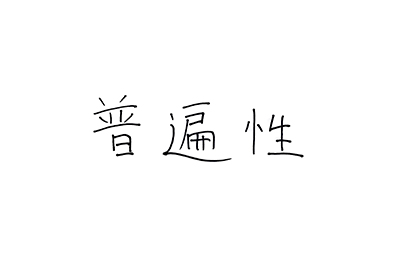 [Text: Fuhensei (“Universality”)]
“Our science is about seeking the common thread of universality that ties various substances and phenomenon together. Basically, I work out numerical formulas using pen and paper. Maybe I won’t solve it right away. But if I keep on thinking about it, I could just be chatting with someone, and suddenly I would find the path.” 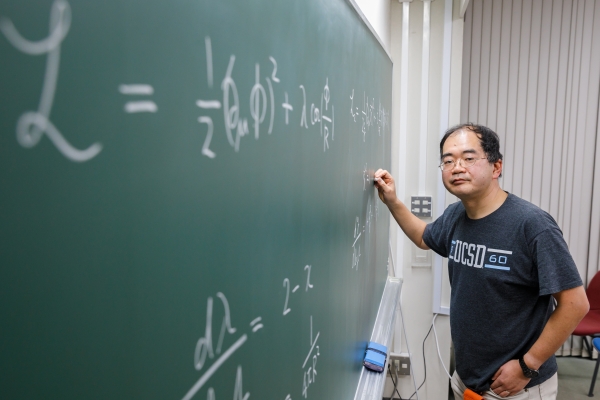