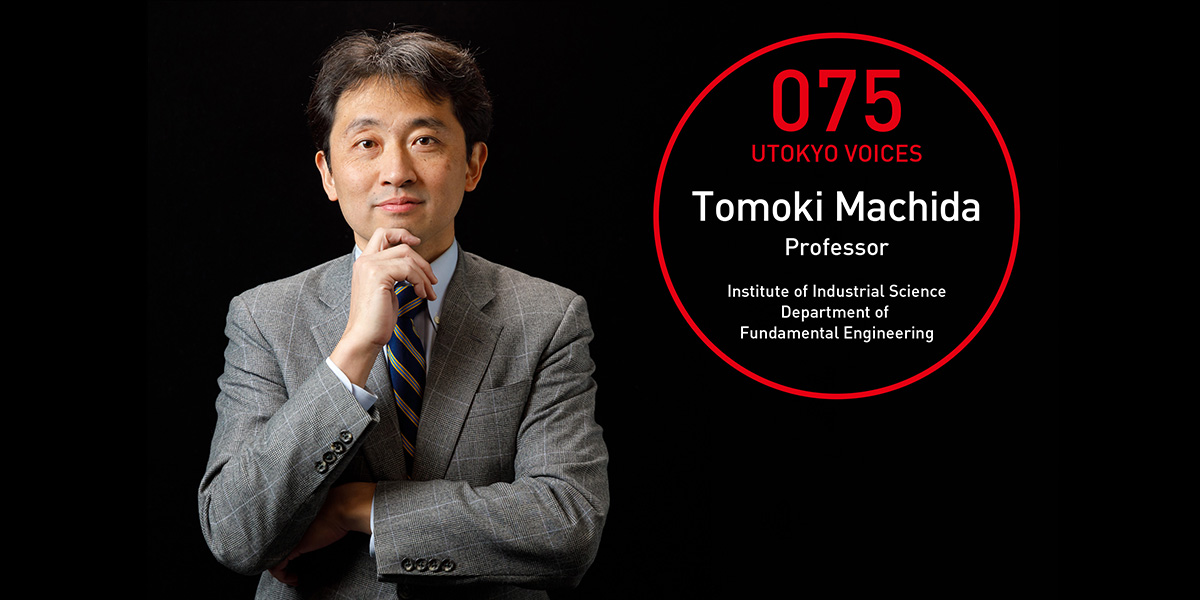 Day after day at Professor Tomoki Machida’s lab, researchers stack “atomic monolayers” — sheet-like substances the thickness of a single atom — in various arrangements. Depending on how they are stacked, atomic monolayers can result in materials the likes of which have never been seen. Machida is hunting for “treasure” inside these extremely thin films.

For instance, in the case of a carbon atom’s atomic monolayer, graphene, carbon atoms display substantially different physical attributes when multiple monolayers of graphene are stacked. Furthermore, graphene is not superconductive as a single unit, but it somehow becomes superconductive when it’s shifted by 1.1 degrees and stacked. Stacked monolayer structures (thin-film heterostructures) sometimes lead to findings which were hitherto unthinkable.

“The movements of electrons and other quantum inside a substance is referred to as quantum transport phenomena, and encompass superconductivity, as well as a phenomenon called the quantum Hall effect, which has garnered significant attention since its discovery in 1980. I’m interested in these quantum transport phenomena. I hope my observations of the movement of quanta inside various thin-film heterostructures lead to understanding of unexplained physical phenomena and the discovery of unknown phenomena.”

Until he graduated high school, Machida, who is devoted to cutting-edge physics, wanted to be a mathematician.

“When I entered the University of Tokyo, I realized I couldn’t compete in mathematics, and so I ‘ran away’ to physics (laughs). I believed I could be more competitive overall in the realm of physics experimentation, which demands not only mental sharpness, but also the physical stamina to do 16 hours of experimenting a day, as well as fine motor skills and experience.”

However, even after completing his undergraduate studies, Machida had a difficult time producing results as a master’s student. Lacking the confidence to advance to a doctoral course, he entered the work force, but he quickly yearned to return to academia and entered a doctoral program. “Looking back now, I see that I’ve arrived at this point after running away numerous times,” laughs Machida.

But this may be why Machida’s research stretches across a myriad of fields, including superconductivity, semiconductors, spin, and quantum computers. This diversity has become a weapon for Machida and enhances his overall strength as a researcher.

In Machida’s current research on van der Waals heterostructures, graphene is stacked with superconductive materials and semiconductors, not just with graphene, which will lead to observations of other new phenomena and to the creation of materials with unprecedented functionality.

“Graphene can also be arranged with electromagnetic materials. Magnetic properties derive from electron spin, and previous spin research is alive and well in this field.”

By testing various arrangements, a phenomenon may occur that astonishes physicists, just as the quantum Hall effect did. “It’s kind of like hunting for treasure,” Machida says, laughing.

People who are too smart may not be suited for treasure hunting. However, with his “willingness to get down in the trenches, as well as his skillful footwork,” Machida doesn’t shy away from taking detours or retreating, and uses chance encounters with materials and people to his advantage while continuing his treasure-hunting journey. 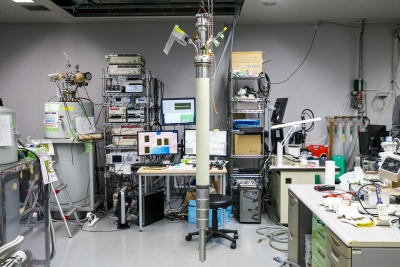 Cooling equipment
In order to view quantum transport phenomena, one must cool substances such as graphene to close to absolute zero temperature (-273 °C). This is incredibly expensive equipment, but it has been dear to Machida ever since he bought it as a postdoctoral researcher. 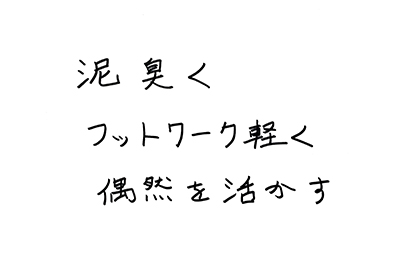 [Text: Doro kusaku futtowa-ku karuku Guuzen wo ikasu (“Raw action, light footwork, exploit chances”)]
Machida says Masashi Nakayama, a former member of the Japan national football team, is someone who personifies the essence of someone who gets down in the trenches. He doesn’t have exceptional sensibilities or beautiful technique, but he uses his momentum and mental strength to score points with a certain rawness. “That’s the kind of researcher I want to be.” 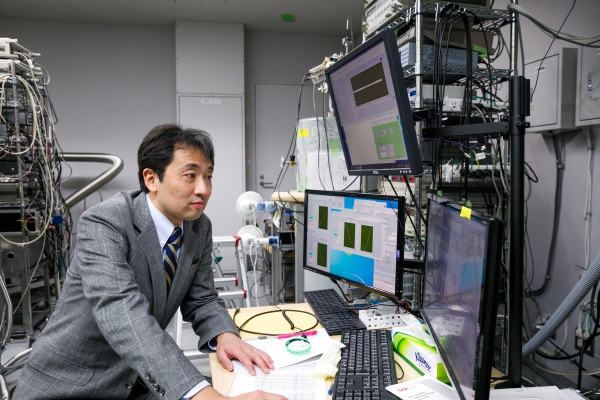 After obtaining Master’s degree at the Department of Applied Physics, Graduate School of Engineering, University of Tokyo, in 1994, worked at NTT’s photonics electronics laboratory until 1995. Obtained doctorate degree at Graduate School of Arts and Sciences, the University of Tokyo, in 1998. Worked as CREST researcher at the Japan Science and Technology Agency and as a PRESTO researcher, after which served as assistant professor at the Institute of Industrial Science, the University of Tokyo, in 2004. Became associate professor in 2007 and arrived at current position in 2017. Conducts research on quantum transport phenomena in compound atomic structures, which are comprised of arrangements of atomic monolayers. Currently developing a robotic system that freely stacks atomic layers like blocks.