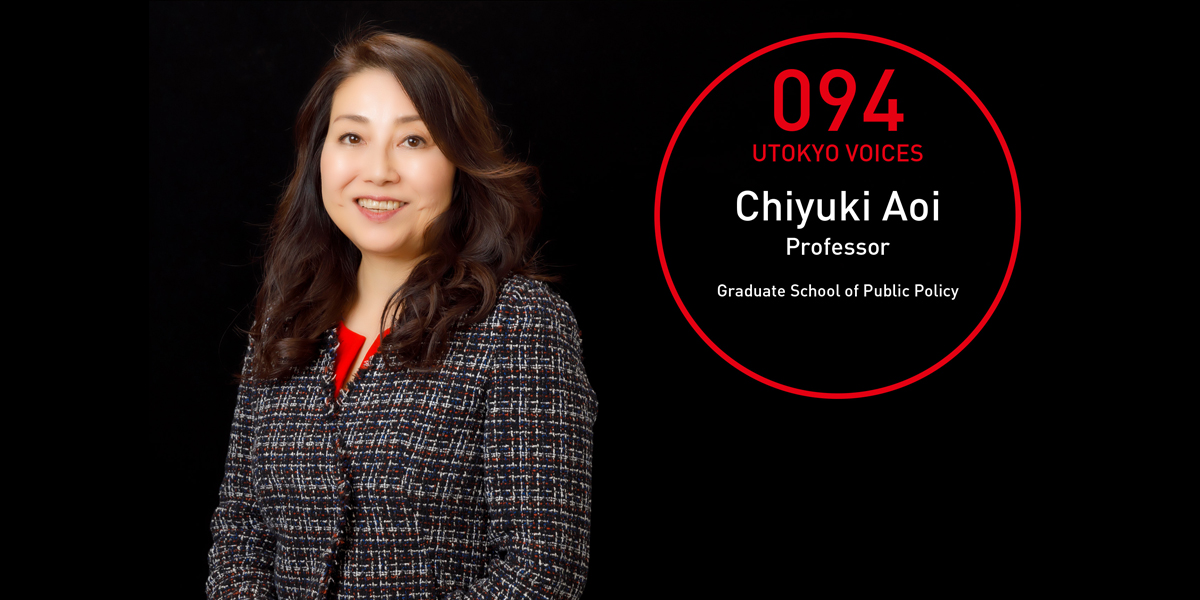 In 1991, as the Cold War drew to a close, civil war broke out in the former Yugoslavia. Prompted by the heavy loss of civilian lives, major Western countries intervened by organizing peace support operations.

Around that time, Professor Chiyuki Aoi was an aspiring researcher in international politics, working in a United Nations organization in Geneva while on leave from Columbia University where she was pursuing her doctoral degree.

“Until then, countries maintained military forces solely to fight their own wars,” Aoi says. “But in the former Yugoslavia, and in Somalia struck by famine at around the same time, countries dispatched armed forces personnel for humanitarian purposes. The purpose and meaning of military action were changing in the post-Cold War era, and I happened to be in a position to observe this new phase up close,” she recalls.

This experience was the starting point of Aoi’s ensuing research, and she has since then been devoted to studying the legitimacy of military action from the standpoints of international politics and security studies.

“Nowadays, however, 90 percent of my research time is concentrated on the topic of strategic communications,” she says.

Exercising military power through armed force and the use of communications for diplomatic purposes may seem like polar opposites. But Aoi views them as two sides of the same coin, both representing means for a country to exert influence beyond its borders.

“When we speak of security strategy,” observes Aoi, “we tend to first think of military power; but in today’s world, increasingly, military power is only one means through which a nation tries to ensure its security. Communications have become extremely important as an effective means for a country to advance its foreign policy agenda.”

Aoi pays special attention to the strategic communications practiced by the United Kingdom in particular.

“Strategic communications is the use of information with the clear purpose of realizing a country’s policy goals — it is part of strategy, linking the objectives and means with priorities,” Aoi explains. “Therefore, it isn’t merely public relations, per se. And it also differs from mere rhetoric that aims to justify a country’s actions after the fact. Strategic communications plays a vital function, such that it is now part of official policies and initiatives.”

As an example, Aoi cites the incident in the U.K. in 2018, in which a former Russian double agent was targeted for assassination with the nerve agent Novichok; in this incident, many ordinary citizens were injured and affected, and one person died. The incident was deplored as a violation of British sovereignty, but the British government refrained from hastily confronting Russia, opting instead to take action step by step, in line with legal procedures. The British government first determined that the chemical agent used in the attack was indeed Novichok, ascertained this through an international organization, then made this public to its own citizens and the international community, in the process implying Russia’s involvement in the attacks.

“The U.K. views a rules-based order as paramount,” notes Aoi. “Therefore, it sent a message to the world that it does not tolerate illegal conduct on its soil, and as a result sought to keep any future similar incidents in check. In this case, communications were an effective part of the British government’s strategy.”

“I think Japan’s external communications remain oriented to general public affairs, or dissemination of information that tends not to be consistent in conveying a strategic vision,” Aoi says. “These sorts of official communications do not necessarily help in demonstrating Japanese leadership on the international stage, or in dispelling misunderstandings about Japan. So in effect, they do not necessarily serve the national interest.”

Aoi feels strongly for the need to nurture specialists in Japan who understand the importance and effectiveness of strategic communications. 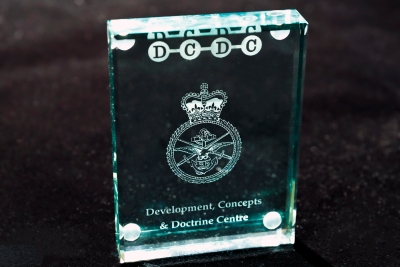 Development, Concepts and Doctrine Centre memento
“Because of the nature of my research, I work in cooperation with a wide range of national and research organizations. Sometimes, I also conduct research commissioned by governments and international agencies,” says Aoi. “This piece is a memento I received from a collaborator at one of the organizations that helped in my research on U.K. peace support doctrines.” 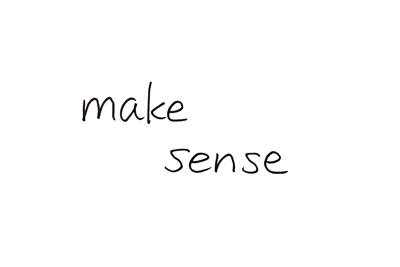 “make sense”
“This is the advice I received from a former mentor,” says Aoi. “When studying international politics, he said, it is important to ‘make sense’ — that is, to be easy to understand and reasonable — rather than become entangled in theory and dogma. The reality of international politics is nothing like a science lab, and also extremely complex.” 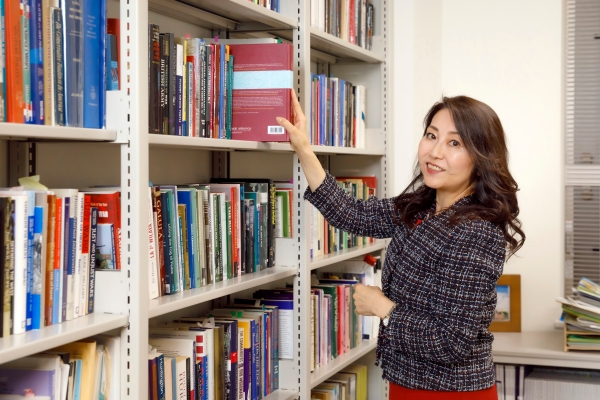 After graduating from Sophia University in Tokyo, earned master’s degree at the Massachusetts Institute of Technology and doctorate from Columbia University. Served as academic program officer in the Peace and Governance Program of the United Nations University and professor at Aoyama Gakuin University before assuming current post in 2016. From 2008 to 2009, was visiting research fellow at the Department of War Studies, King’s College London, and visiting professor there in 2019-2020. Has published broadly in both English and Japanese on international security and strategic concepts, including in the journals Defence Strategic Communications, Pacific Review, RUSI Journal, International Affairs (in Japanese) and Journal of Military History (in Japanese). In 2018, was an elected member of the Japanese prime minister’s Council on Security and Defense Capabilities advisory panel.