Becoming an expert to study, overcome your own problems｜UTOKYO VOICES 096 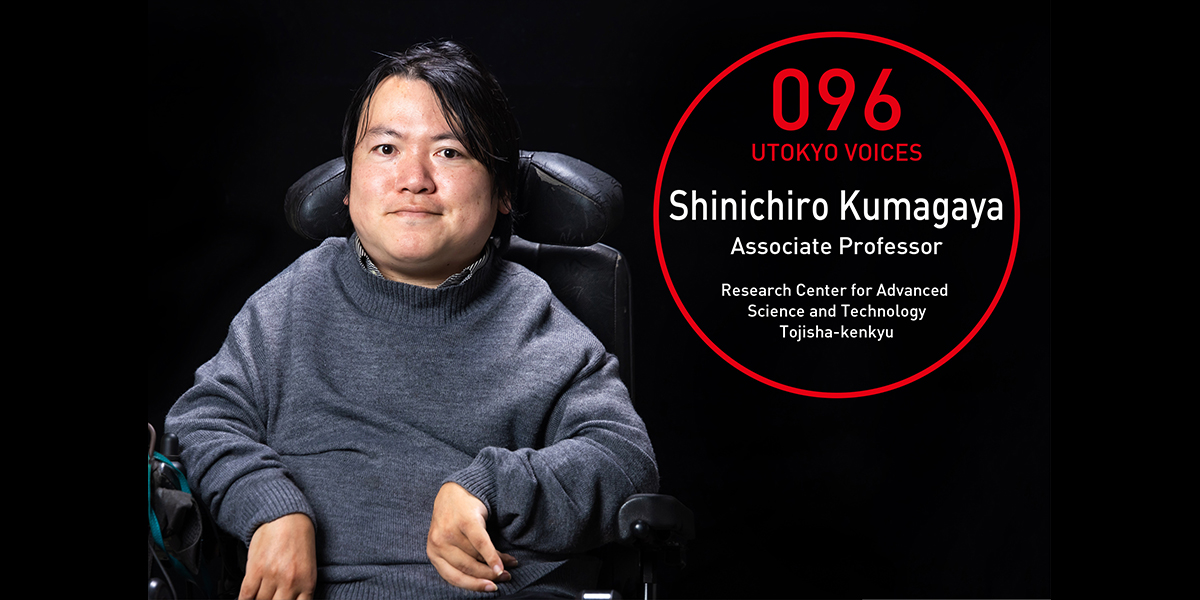 Becoming an expert to study, overcome your own problems

Associate Professor Shinichiro Kumagaya attributes several turning points since he was a child that set him on his current research path.

Born with cerebral palsy, a neurological disorder affecting muscle movement and coordination due to brain injury at or around birth, the researcher remembers his childhood as a struggle marked by pain and solitude. “I would endure five to six hours of agonizing rehabilitation each day,” he recalls. At the time, during the 1970s, experts believed that cerebral palsy patients had a 90% chance of regaining their motor function through intensive rehabilitation from early on in their lives.

“Aside from rehab, I’d eat and sleep, precluding me from playing with friends,” he says. On the other hand, staying home because of his disability allowed Kumagaya to sit at his desk and draw pictures using his imagination, or become so engrossed in the world of mathematics that by the time he was a teenager, he aspired to be a mathematician.

By the 1980s, the excruciating regimen that Kumagaya had stuck out as a young child was shown to have little effect. Rather than losing all hope, however, the revised stance signified liberation from a life of merciless rehabilitation. This became the first turning point in his life.

In his teens, Kumagaya encountered the disability rights movement and was emboldened by its assertion that disabilities exist outside the flesh, present not within the body but in the social environment in which we find ourselves. He says of his revelation: “I experienced a paradigm shift in my thinking when I realized that it was OK if my disability wasn’t cured, and felt, at last, that I would survive.”

Kumagaya’s second turning point came when he saw an older student with disability at his school receiving the support of innumerable people and enjoying life. “I gained hope and found something to aspire to,” he says. “I decided to break free of my parents’ protection as soon as I could, and moved far from my home in Yamaguchi Prefecture to enter the University of Tokyo as a student in its Natural Sciences I undergraduate stream.”

Kumagaya’s third turning point followed when he began to live independently in an apartment near the university’s Komaba Campus in Tokyo’s Meguro ward.

“When a classmate would come to my apartment late at night having missed the last train home, I would agree to put him up if he helped me bathe; before I knew it, I had assembled a support team,” he says. “I realized that I really enjoyed spending time with people. So I became interested in being involved not in mathematics but with people and society, while drawing on all the experiences I had accumulated until then to pursue medicine.”

The fourth turning point in Kumagaya’s life was his first encounter with tojisha-kenkyu in graduate school. Tojisha-kenkyu, described as self-directed or user-led research, is an approach that originated in the mental health community in Japan, in which the person with disability or disorder studies themself and becomes the expert, analyzing and researching difficulties of their own that are incomprehensible to others.

Kumagaya would go on to become a pediatrician and attend to patients with autism by providing support that aligned with their subjective experience. Through such applications, he would come to feel that the insights gained through tojisha-kenkyu would improve the quality of medical care.

Therapy and rehabilitation up to that point attempted to transform the body of the person with disability; however, the basis of tojisha-kenkyu is first coming to know their actual situation and then sharing with others what has been learned about them. “The aim of tojisha-kenkyu,” Kumagaya says, “is for a person facing hardships that they’ve kept to themselves to become the expert on their problems; they conduct research collaborating with others facing similar difficulties, as well as with other specialists.”

After returning to university and academia, Kumagaya has expanded his range of tojisha-kenkyu to include people with developmental disorders or addictions, as well as athletes. He further analyzes scientifically whether the internal experiences of each person are not imagined but are actually occurring, and if they also apply to other people.

In the upcoming academic year beginning in spring 2021, Kumagaya is slated to launch a project aimed at implementing tojisha-kenkyu in various organizational settings, including the university; a wide range of people facing difficulties will be considered tojisha, whether or not they have a disability.

“Embarking on tojisha-kenkyu among the diverse members of a university, no matter whether they are disabled or nondisabled, will engender a culture within the university where people aren’t afraid to ask for help,” Kumagaya says. “Moreover, I expect collaboration among various members will lead to further enrichment of knowledge.” 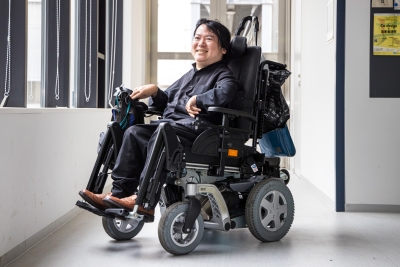 Electric wheelchair
Associate Professor Shinichiro Kumagaya began using a wheelchair in his first year of junior high school, and it has become an indispensable partner. During his time as a pediatrician, when he got little sleep, he switched to a Storm model electric wheelchair with a reclining backrest, which allowed him to take naps. He got his fourth wheelchair (pictured above) in November 2020, and with all its bells and whistles, he was still trying to get used to its new-car feeling at the time of this writing. 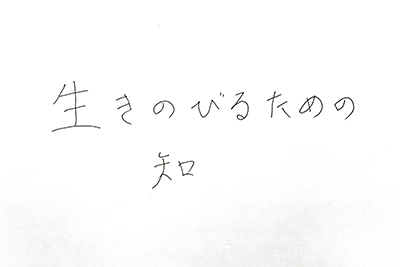 [Text: Ikinobiru tame no chi (“Knowledge to survive”)]
“As a pediatrician, tojisha-kenkyu transformed my approach to interviewing patients with autism, from one that viewed their disorder from the outside to that which aligned with their inner side,” Kumagaya says. “For instance, calling out and saying something like ‘Isn’t that echo from the wall annoying?’ can build trust instantly between two people. I believe that this is the knowledge to survive.” 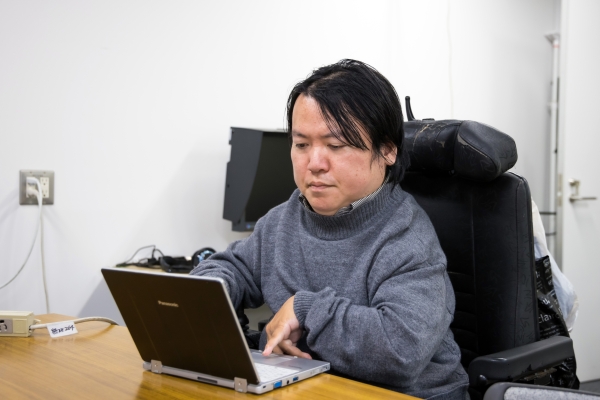