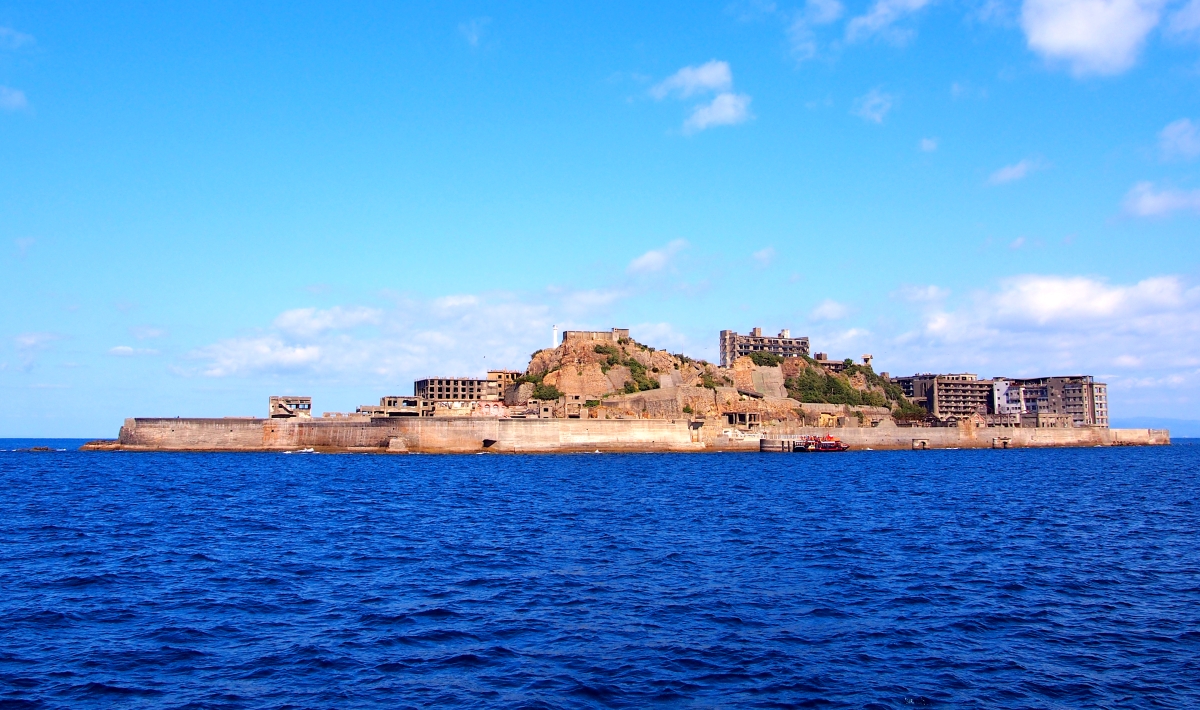 Hashima, popularly known as “Gunkanjima,” or Battleship Island. The nickname for the Nagasaki Prefecture island comes from its unique battleship-like silhouette. © 2018 Takafumi Noguchi.

Takafumi Noguchi calls himself a “doctor of concrete buildings.” 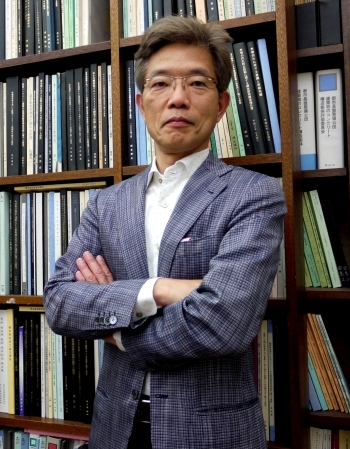 Takafumi Noguchi, professor of architecture at UTokyo’s Graduate School of Engineering ©2018 The University of Tokyo.

The professor of architecture has spent much of his 30-year research career assessing the condition of aging reinforced concrete structures – buildings made with steel bars embedded in the concrete for reinforcement. He studies how to perform “surgery” to extend the life of the structures.

So seven years ago, when Noguchi was asked to investigate and advise on how to save some of the world’s most dilapidated concrete buildings on a deserted island, he felt the opportunity was too good to pass up.

The island, Hashima, is located off the coast of Nagasaki Prefecture in southwestern Japan. It is more popularly known as “Gunkanjima,” or Battleship Island. The nickname comes from the unique battleship-like silhouette formed by concrete buildings jam-packed onto the 6-hectare piece of land surrounded by water.

The island, which supported an undersea coal mine, was abandoned in 1974.

Typhoons and high seas have left no trace of the houses and other wooden structures that huddled on the island. The concrete buildings themselves are barely standing, exposing rusted and gnarled steel bars.

“Under normal circumstances, buildings are torn down long before they suffer such extensive damage,” Noguchi said recently in his office at the University of Tokyo’s Graduate School of Engineering, pointing to detailed data that show the extent of deterioration. “It’s extremely rare to see structures that have weathered this much damage. I am thankful that they are even still there.” 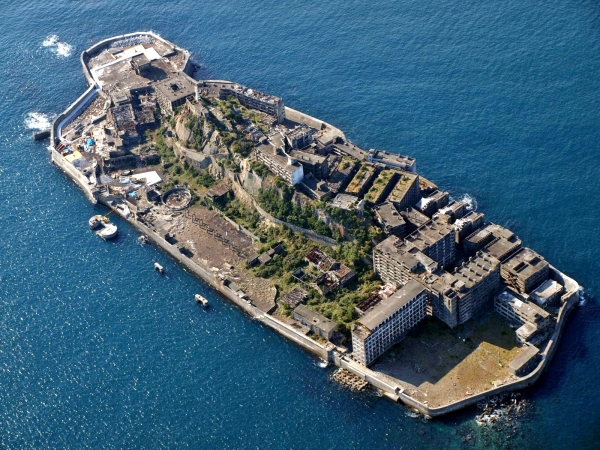 Hashima, or Battleship Island, in an undated photo
By Flickr user: kntrty https://www.flickr.com/photos/kntrty/ [CC BY 2.0 (https://creativecommons.org/licenses/by/2.0)], via Wikimedia Commons

The island is a major tourist destination today. The city of Nagasaki issued permits for ferry operators to carry tourists to the island in 2009, and allowed daytime access to a limited section of the ruins.

Tourist interest skyrocketed after the island was featured as a villain’s base in the 2012 James Bond movie Skyfall, and following its addition to the UNESCO World Heritage list in 2015.

The island, developed by the Mitsubishi conglomerate, was an icon of Japan’s industrialization as the nation rushed to catch up with Western powers at the turn of the 20th century, and sought to pick up where it left off after World War II. At its peak in 1960, about 5,300 people lived in the seawall-encircled “compact city,” making it one of the most densely populated places on Earth. It housed everything from schools, a hospital, post office, temple and shrine to a pachinko parlor and movie theater. 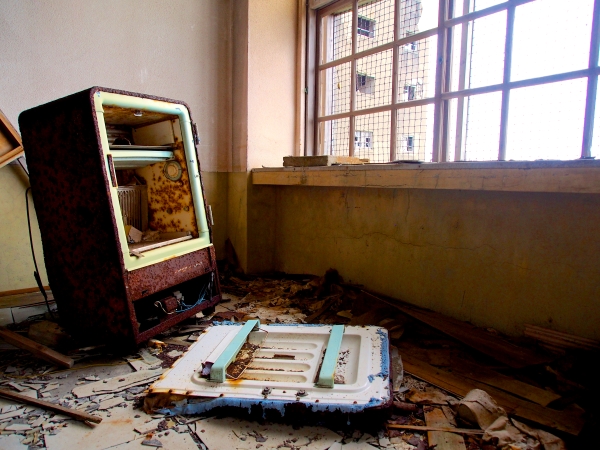 A rusted refrigerator sits in an apartment. Miners who worked on the island after WWII could afford the luxuries known as the “three sacred treasures,” which at the time were a television, a washing machine and a refrigerator. ©2018 Takafumi Noguchi.

Noguchi says he got a glimpse of life on this unique island when he and other researchers visited for the first time in the fall of 2011.

The abandoned apartments had been left untouched since the coal mine was closed and residents were ordered to leave. Traces of the islanders’ lives were visible as they left much of their belongings behind.

“We found television sets, washing machines, manga books and newspapers, as well as workers’ pay slips and even school report cards,” Noguchi said. “Time was frozen there. It reminded me of scenes that I remember vaguely from my childhood.”

Miners who worked there after WWII were relatively well-paid and could afford the luxuries known as the “three sacred treasures,” which at the time were a television, a washing machine and a refrigerator, he said. 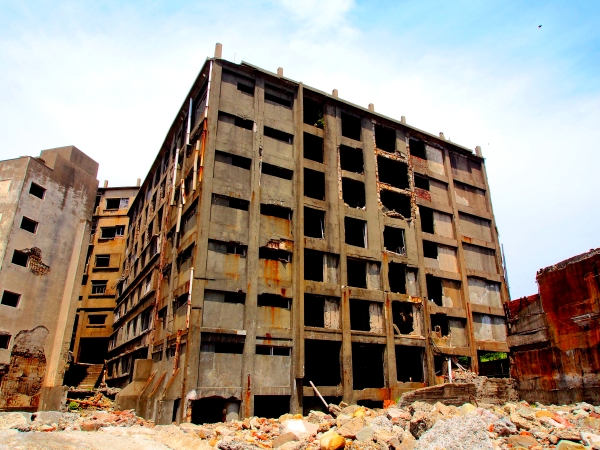 Noguchi notes that the concrete structures – some of which are over 100 years old – were built using the most innovative, cutting-edge technologies available at the time.

Building No. 30, constructed in 1916, was Japan’s first concrete high-rise apartment building. The housing for miners was originally four stories high but was later expanded to seven stories, and contained 140 units.

Other buildings were also designed to withstand the harsh environment surrounding them, according to Noguchi.

“Many buildings by the ocean served as seawalls,” he said. “The island was struck by extremely high waves during the typhoon season. Photos from the era show that during typhoons, people would gather on the rooftops of tall buildings in the center of the island to watch the monster waves pound against seaside structures. The seaward buildings featured smaller windows facing the ocean and there was a corridor that insulated the apartment units from the waves.”

An apartment complex had small courtyards between its buildings. The buildings, No. 16 to No. 20, were designed in a stepwise fashion to allow sunlight to reach the courtyard, he explained. 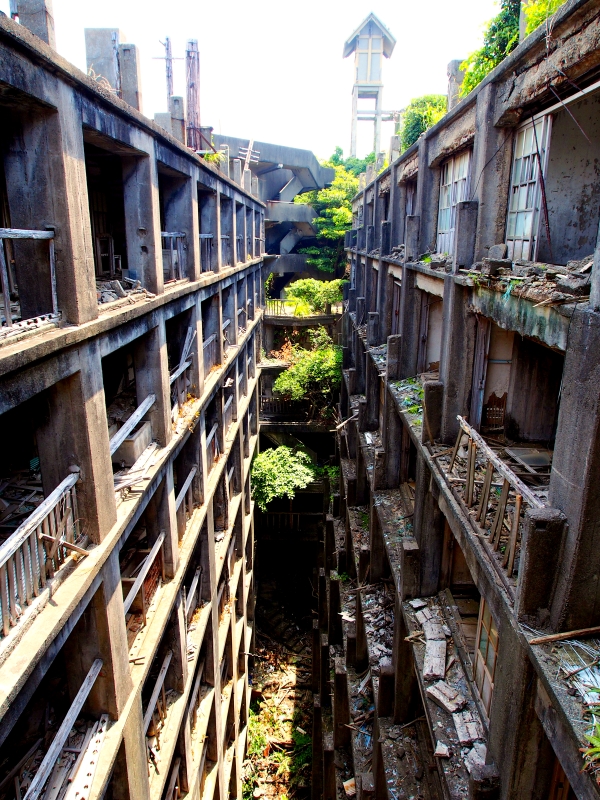 An apartment complex had small courtyards between the buildings. For sunlight to reach the courtyards, the buildings were built in a stepwise fashion. ©2018 Takafumi Noguchi.

Since 2011, Noguchi’s team has used infrared light scanners and other tools to survey the buildings, while starting investigation on repairing and strengthening some structures in immediate danger of collapsing.

According to Noguchi, concrete, which is a mixture of cement, aggregate (crushed sand or gravel) and water, does not usually deteriorate much over time. But when it is exposed to seawater, salt seeps in and causes the steel bars inside to rust. The bars become thicker from oxidization, which applies stress on the concrete from the inside, making it easier for cracks to form.

These cracks then provide more openings for saltwater and oxygen to invade, further expanding the steel bars and causing the concrete to flake off, he said.

Noguchi’s team has evaluated several ways to repair and strengthen the damaged buildings, including controlling the flow of electricity inside the concrete.

The rusted, oxidized steel bars inside the concrete become the anode (positively charged), Noguchi explained, resulting in an electric current running through them and the concrete. Using a solar panel to provide a continuous source of power, researchers might be able to prevent further oxidation and corrosion of the steel bars despite the extremely high concentration of salt in the concrete. 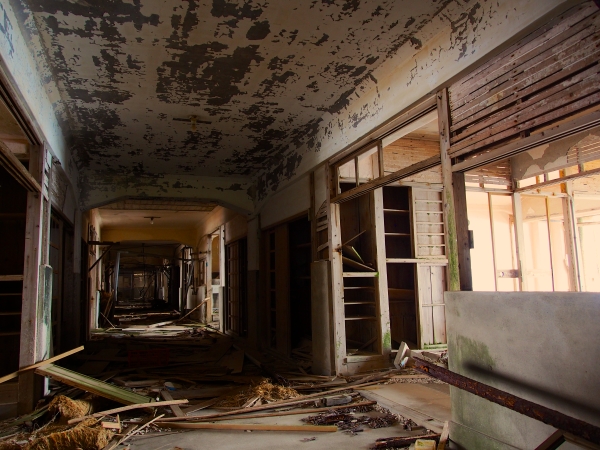 Debris is strewn about on the floors of Building No. 65. To secure enough repair workers to toil away at a site that might collapse any minute will be a challenge. ©2018 Takafumi Noguchi.

But work on a designated cultural property comes with a unique set of challenges. For example, technologies to fix the island’s properties need to be “reversible,” so when newer, better ways to preserve them become available in the future, the methods can be replaced.

It is more expensive to maintain buildings in their decayed form than razing them to the ground and rebuilding them.

“Gunkanjima’s cultural value includes its 40-year history since being abandoned,” Noguchi said. “So it needs to be preserved as ruins.”

The budget that the city of Nagasaki has set aside for the buildings so far falls far short of what is needed to resuscitate them.

In addition, the researchers are fighting against the clock.

“The buildings have degraded, even in the seven years since I started visiting, and continue to do so,” he said. 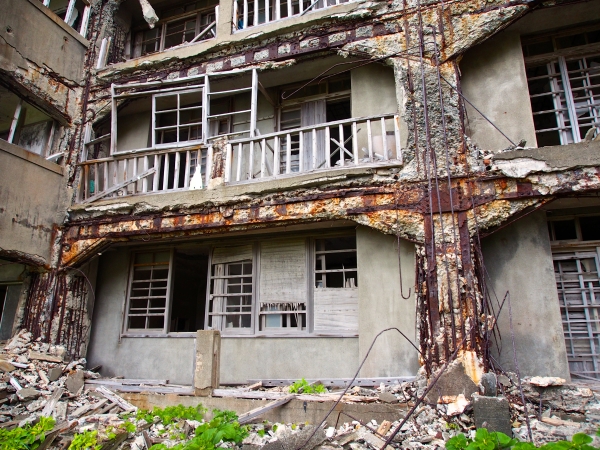 The eastern wing of Building No. 65, one of the apartments for miners on the island ©2018 Takafumi Noguchi.

To secure enough workers to toil away at a site that might collapse any minute will not be easy, either.

Noguchi, however, is committed to the task. In 2016, with cooperation from industry partners, the researchers started a 10-year project to place concrete specimens coated with various chemicals and other anticorrosive agents, and monitor how they withstand the elements.

Noguchi visits the island twice a year to monitor the specimens placed on the rooftop of the former island hospital, and to check on the condition of other structures.

“If the buildings survive, or even if they fail and crumble, the process they go through will be of great academic interest to us researchers,” he said.