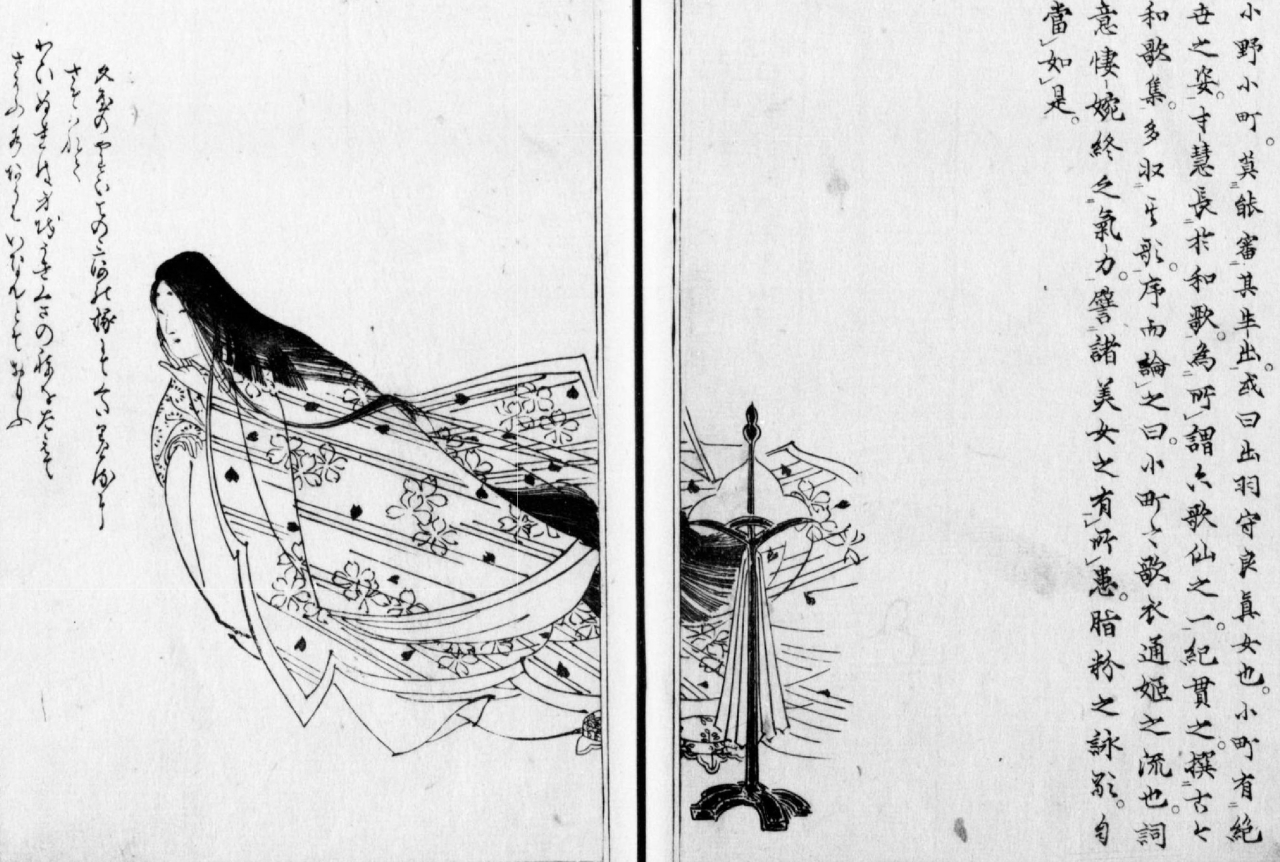 A depiction of Ono no Komachi in the Zenken Kojitsu, a collection of biographies by illustrator Kikuchi Yosai. The collection, first published from 1836 to 1868, affected the public perceptions of historical figures in Japan. Courtesy of the National Diet Library Digital Collection.

The last queen of ancient Egypt, the prized consort of Emperor Xuanzong of Tang Dynasty China and the esteemed waka poet in the Heian Period hold a special place in the minds of many people in Japan: They are famous — if not most famous — as “the three greatest beauties of all time.”

How did the three historical figures from completely different eras and countries come to be bundled together and regarded as the “absolute beauties”?

Kumiko Nagai, associate professor of comparative literature and culture at the Graduate School of Arts and Sciences, has studied the origin and development of popular beliefs on these historical figures that have crept into the modern Japanese psyche. Her research has revealed that public perceptions are often heavily influenced by social contexts and popular culture of that time.

Nagai, who studies emaki (Japanese picture scrolls) from the Heian Period (794-1185), cites a classroom assignment she once gave to first-year UTokyo students as one reason she became academically more interested in popular sayings about historical figures. When she asked the students to analyze biographies about well-known figures, she learned that many people associate the figures not so much with depictions of them in ancient pictures or well-researched biographies but with information about them broadcast on TV or characters inspired by the figures and appearing in computer games and animated drama series.

“I started my career with research about emaki, such as one of The Tale of Genji,” Nagai said, referring to the 11th-century masterpiece of Japanese literature, often considered the world’s first novel. “But I gradually became interested in how the images of people described in ancient literature have been passed on to people today. I was also genuinely curious about Ono no Komachi, as I remembered hearing from somewhere that she was beautiful.

“Furthermore, when I was in junior high school, friends told me that I would have been considered a beauty in the Heian Period. I wondered how schoolchildren today knew what people in the Heian Period looked like, and how people’s perceptions of beauty might change over time. My own appearance aside, I felt such questions were worth exploring.”

Nagai adds that she found the original Tale of Genji pictures beautiful when she first saw them, noting that she wondered if the aesthetic sensibility of people when the epic novel was written is any different from that of people today. 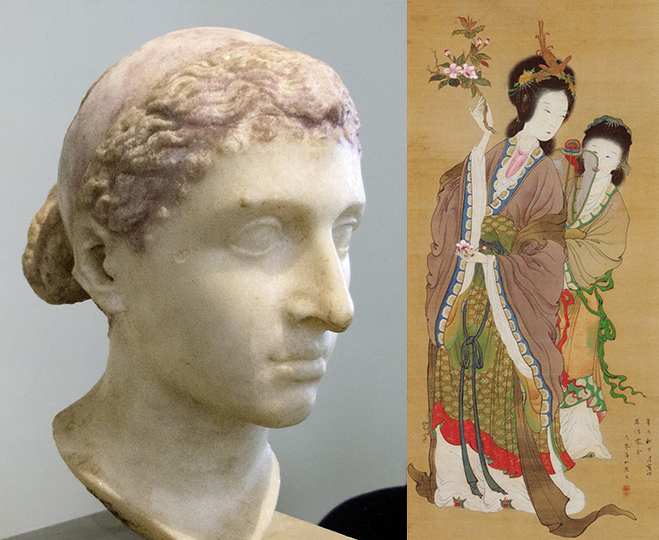 Legends of Ono no Komachi being a beauty date back many centuries, but it was only during the late 1800s when the poet, whose birth and death dates are unknown, came to be cited as one of “the world’s three greatest beauties of all time” along with Cleopatra and Yang Guifei.

For example, in the July 20, 1888, edition of the major newspaper Yomiuri Shimbun, an editorial titled “Popular trends series No. 4: The difficulty of judging appearances” referred to the three women as beauties. This editorial, one of many articles from that time that discussed women who were popular in modern Japan, commented that values on appearances vary from person to person.

Komachi as an icon of Kokufu Culture

The Kokufu Culture — which influenced everything from literature and Buddhism to architecture — blossomed after the cultural inflow from the Asian continent stopped with the abolition in 894 of the envoy to Tang Dynasty China.

Meanwhile, Nagai says that Cleopatra probably entered the popular lexicon in the 1910s after a theatrical show themed on her life, featuring popular actress Sumako Matsui, was staged at the Imperial Theatre in Tokyo, the first Western-style theater in Japan, and following the screening of the Italian silent movie “Antony and Cleopatra” at a movie theater in the capital’s Asakusa district.

Interestingly, the three women are all known to have suffered a tragic death — or that’s at least what legends say.

“One legend has it that Ono no Komachi turned ugly in her old age and wandered about in the countryside,” Nagai said. “It is highly likely that the three were considered to belong to the same category, that of ‘tragic beauties.’”

Tang Dynasty Emperor Xuanzong’s obsession with Yang Guifei is known to have led his aides to revolt, causing him to put her to death in the end. Cleopatra too is known to have committed suicide. 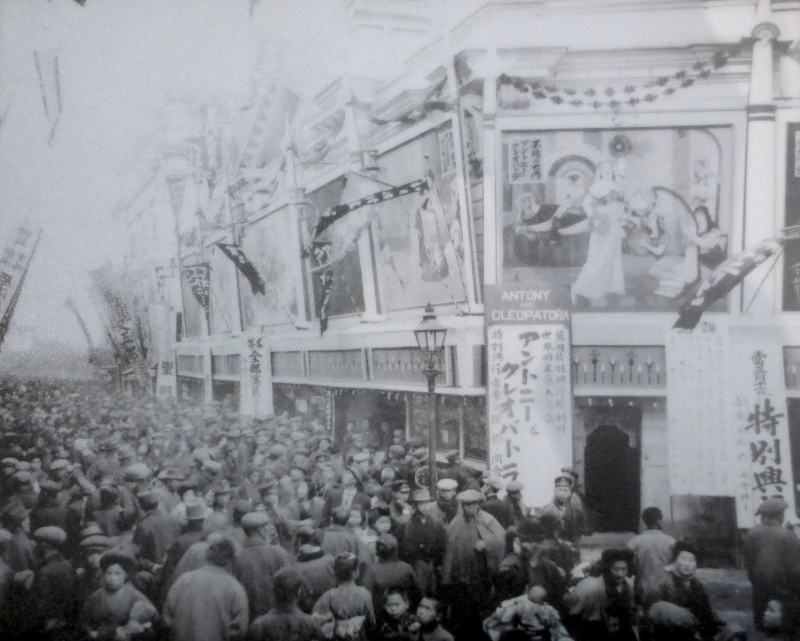 People crowd the entrance of Denkikan, a movie theater in Tokyo’s Asakusa district, to watch the screening of the Italian silent movie “Antony and Cleopatra,” in 1914. Wikimedia Commons

It is unclear whether Ono no Komachi had a striking appearance. People in the Heian Period probably had no idea, either, because women tended to hide their faces from public view in those days.

“Today, someone’s beauty is often judged by their facial features, such as the size of their eyes or the shape of their nose, but back then, women exposed their faces only to a few people around them. So the only hints of women’s beauty were their backs or the volume and length of their hair,” she said. “And the arrangement of their rooms and their manners were likely the only other indicators.”

In fact, Ono no Komachi’s reputation as a much-sought-after figure spread after people read a collection of late-Heian Period Chinese-language poems on another tragic character also named Komachi. Later, in the famous Tales of Ise, a collection of waka poems and associated narratives, Ono no Komachi was introduced as a “sensual woman,” further fueling the image of her as a woman of many loves, according to Nagai.

What’s certain is that Ono no Komachi is a woman of many mysteries. As such, Nagai stresses the importance of distinguishing truths from myths and examining reasons why such “absurd” tales were created.

“Almost all Japanese people know Ono no Komachi, but you realize, if you look hard enough, that there are so many legends and few solid facts about her,” she said.

“In the internet age we are deluged with information, but I want to remind people of the importance of judging the quality of information by stopping and checking it each time.”