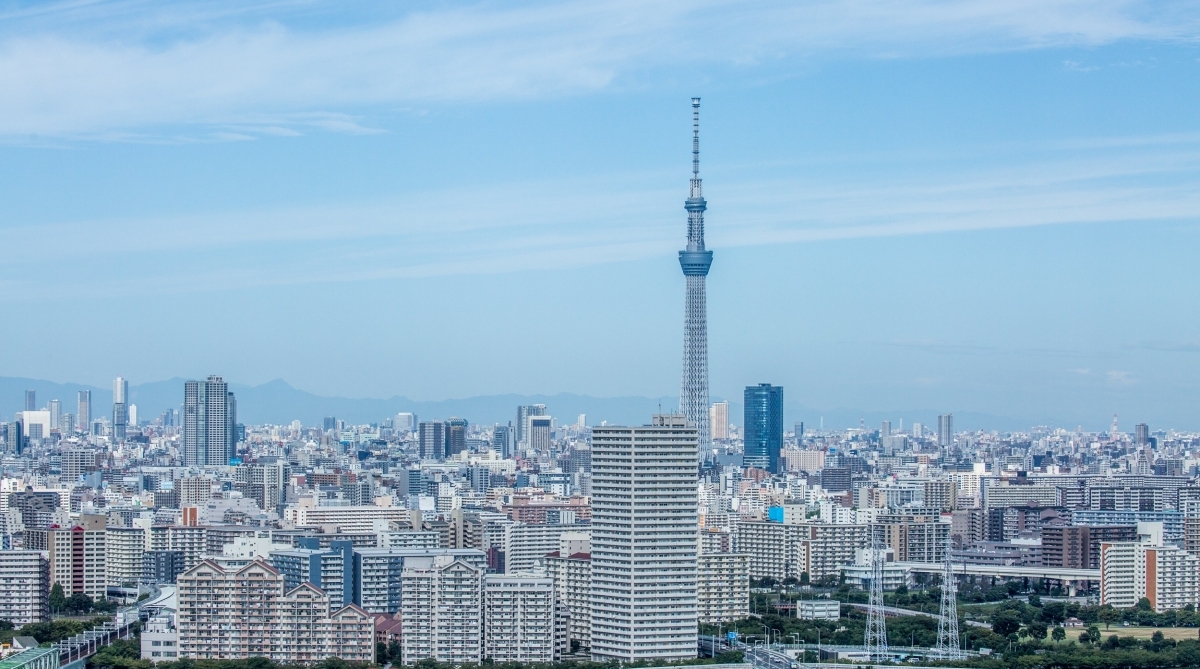 When they met for the first time in 2000 for only 10 minutes, Masayoshi Son and Jack Ma, two of the most powerful businessmen in Asia, instantly recognized each other as kindred spirits — entrepreneurs who were intent on revolutionizing the world through the internet. Nearly two decades later, these “friends and partners” retain a passion for digital revolution that is as strong as ever, although the focus of their dreams now lies in the field of artificial intelligence.

“In the next 10 years I will continue to invest more and more [in AI] because the world needs continuous revolutions,” said Son, the chairman and CEO of SoftBank Group, indicating a commitment to continue backing startups through his $100 billion Vision Fund. Son is interested in identifying “young, crazy and passionate entrepreneurs” who can use his help in changing the world.

Ma — a co-founder of the Alibaba Group who helped grow the business from a tiny startup to China’s largest e-commerce company — is, on the other hand, interested in preparing people for the coming revolution through education. “We have to change the way of education, making sure our kids are creative, constructive and innovative.”

The two entrepreneurs took part in a special dialogue at the University of Tokyo on Dec. 6, the first day of the three-day Tokyo Forum 2019 — an ambitious, new undertaking that seeks to provide a venue for discussions among top global players in a vast range of fields, from business and technology to politics. The overarching theme of the forum was “Shaping the Future,” and to this end it brought together business leaders such as Son and Ma, former prime ministers, a Nobel laureate and experts in numerous disciplines that will play important roles in the world of tomorrow. More than 120 speakers shared their views at the conference, which was co-hosted by UTokyo and South Korea’s Chey Institute for Advanced Studies (CIAS).

Of the many important issues on the agenda, UTokyo President Makoto Gonokami stressed that it is the digital revolution, which includes AI, the topic of Son and Ma’s discussion, that is central to understanding how our society is changing.

“The digital revolution is a great opportunity to solve difficult social issues and create an inclusive future society,” Gonokami said during his opening remarks. “On the other hand, the digital revolution could increase disparity. Data tends to accumulate to those who already have it.”

Gonokami also expressed his resolve that UTokyo would be committed to identifying and addressing social challenges.

“To ensure that everyone can enjoy the upsides of the digital revolution, it is important to involve many people and encourage them to work together,” he said. “We need two things to make this possible. First, we need to share a common vision of the future and work toward it with a strong will. Second, we should encourage people, especially young people, to contribute to solving social issues. The university is the best place to do both.”

This collaboration between UTokyo and CIAS comes at a time when Japan and South Korea are experiencing one of the rockiest stretches in their diplomatic relationship. Holding a conference of this scale is emblematic of a desire among the academic and business leaders of both nations to reorient the bilateral relationship in a more positive direction, despite the ongoing political feud.

“It is time for Asia to pull its weight and speak with an influential voice on the global stage,” said Chey Tae-won, chairman of both the South Korean conglomerate SK Group and CIAS, during his opening remarks. “We must become a true community and overcome our differences. Let us step up our cooperation on trade and investment, for example. We also must remind our policymakers about common academic and cultural interests. Let us work with them to explore solutions and avoid an unnecessary dead end.”

The future of Japan-Korea ties

The forum also had a session in which Japanese and South Korean business leaders discussed issues related to their two countries.

Chey Tae-won (center), chairman of South Korean conglomerate SK Group and chairman of Chey Institute for Advanced Studies (CIAS), speaks during a panel discussion involving Japanese and South Korean business leaders on Dec. 6, 2019. The session was part of Tokyo Forum 2019, a three-day event co-hosted by UTokyo and CIAS. Kim Yoon (left), chairman of Korea-Japan Economic Association, and Hiroaki Nakanishi, chairman of Keidanren (Japan Business Federation), are seated next to him.

Kim Yoon, chairman of the Korea-Japan Economic Association, said business leaders in Japan and South Korea are highly concerned that the prolonged diplomatic feud will disrupt the global supply chain, which includes chemical and parts manufacturers in Japan and chipmakers in South Korea. Kim suggested three possible avenues for restoring normalcy to the bilateral relationship: helping young South Koreans who are struggling to find jobs at home to secure employment in Japan, which is in the midst of an acute labor shortage; encouraging both countries to cooperate in the “fourth industrial revolution” occurring in technologies such as AI, the internet of things (IoT), self-driving cars and robotics; and having Japanese and South Korean companies form joint ventures to do business in other countries. Cooperating in these areas will help ease bilateral tensions in the coming generations, Kim said.

Hiroaki Nakanishi, chairman of Keidanren, the Japan Business Federation, agreed with Kim. He proposed that Japan and South Korea work together to help other Asian countries solve the social challenges that arise from industrialization, as both countries have already gone through this sometimes difficult process.

The forum also discussed the shifting geopolitics of Northeast Asia that has accompanied the rise of China and its rivalry with the United States.

Edwin Feulner, founder of the Heritage Foundation, a U.S. think tank, predicted that the ongoing trade dispute between the U.S. and China would not be settled anytime soon. One reason, he said, is due to their disagreement over intellectual property, which is enshrined in the U.S. Constitution. Another reason is the World Bank’s provision of subsidized loans to China. “You cannot be both the No. 2 economy in the world and at the same time still be a developing economy,” Feulner said, stating that it is time for China to graduate from the World Bank status of a developing nation.

Feulner also flatly ruled out the possibility that the U.S. will lessen its engagement in Northeast Asia, saying the superpower “will continue to be a long-time presence in North Asia.” He continued: “We believe very strongly in our bilateral relationships both here with Japan and across the sea with the Republic of Korea. ... The United States will stay in North Asia and will remain committed to a peaceful North Asia.”

Then Professor Zhang Yunling of the Chinese Academy of Social Sciences provided the Chinese perspective on the geopolitical situation in the region. “The new grand transformation is China’s rise,” he said, which “has really changed the power structure, the power relations ... How to accept and adapt to China’s rise? China is different, with a different system and culture, and probably to some extent, civilization. ... So how to accommodate this kind of rise? That’s a big challenge.”

Zhang also said the region faces several crucial issues: emerging strategic competition between the U.S. and China, North Korea’s development of nuclear weapons, and the need to rebuild relationships between China, South Korea and Japan. “Among all these big challenges, the key is peace: no more war again in the region.”

While the region needs peace and stability, “China hesitates to accept the existing relationship and order,” Zhang said. “What kind of relationship and order can China make? I don’t think [China will accomplish it] by itself,” he continued, saying the country needs to pursue a peace and development strategy with international partners to avoid armed conflict.

On the broader global horizon, two former prime ministers discussed the role of the “middle powers” — countries that are not superpowers, but which wield enough international influence to shape events — in a time when liberal democracy appears to be declining and populism is on the rise. 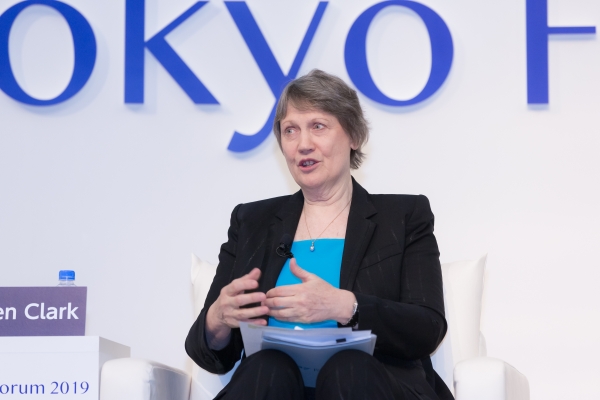 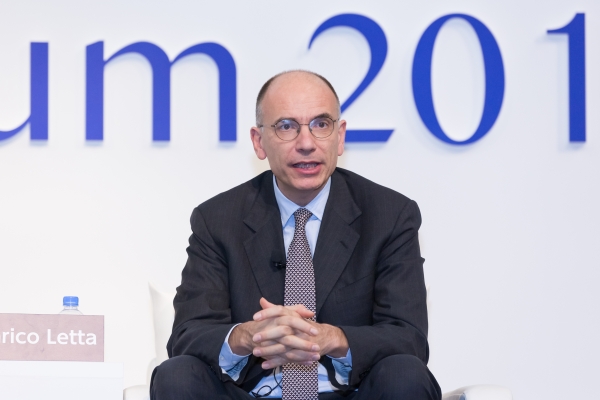 A special dialogue was held between Enrico Letta and Helen Clark, former prime ministers of Italy and New Zealand, respectively. Clark noted that it's crucial for all countries to do their best to support the multilateral rules-based order today, when both democratic and multilateral rules-based orders are under tremendous stress. She emphasized that it is important “to keep up dialogue, to engage, including with those that we may not intrinsically have a lot in common with in political values or systems.”

Letta also sees the middle powers as playing an essential role. “I strongly believe that it is time for a great alliance between different groups of countries and a great alliance among middle powers,” to strengthen multilateralism to deal with new, complicated challenges, such as climate change and protection of personal data.

Three speakers from China, Japan and South Korea were invited for the third and final day of the Tokyo Forum on Dec. 8.

Justin Yifu Lin, former chief economist at the World Bank, discussed China’s Belt and Road Initiative, which he said is designed to help create much-needed infrastructure that developing countries need to transform into modern, industrialized nations. Sputniko!, an artist and associate professor at Tokyo University of the Arts, described her work in speculative design, which addresses both the challenges and opportunities of the future.

And from South Korea, Lee Gunho, chief engineer and co-founder of e-learning company Enuma, discussed successful pilot projects using an app his company developed to help children who have been deprived of educational opportunities.

Other keynote speakers at the forum included Kengo Kuma, architect and professor at the UTokyo Graduate School of Engineering; Rebeca Grynspan, current secretary-general of the Ibero-American General Secretariat and former vice president of Costa Rica; and Ryoji Noyori, winner of the 2001 Nobel Prize in chemistry.

UTokyo and CIAS have agreed to hold the Tokyo Forum annually to stimulate discussions on finding the best ideas for shaping the world and humanity in the face of complex situations where the conventional wisdom can no longer provide answers. 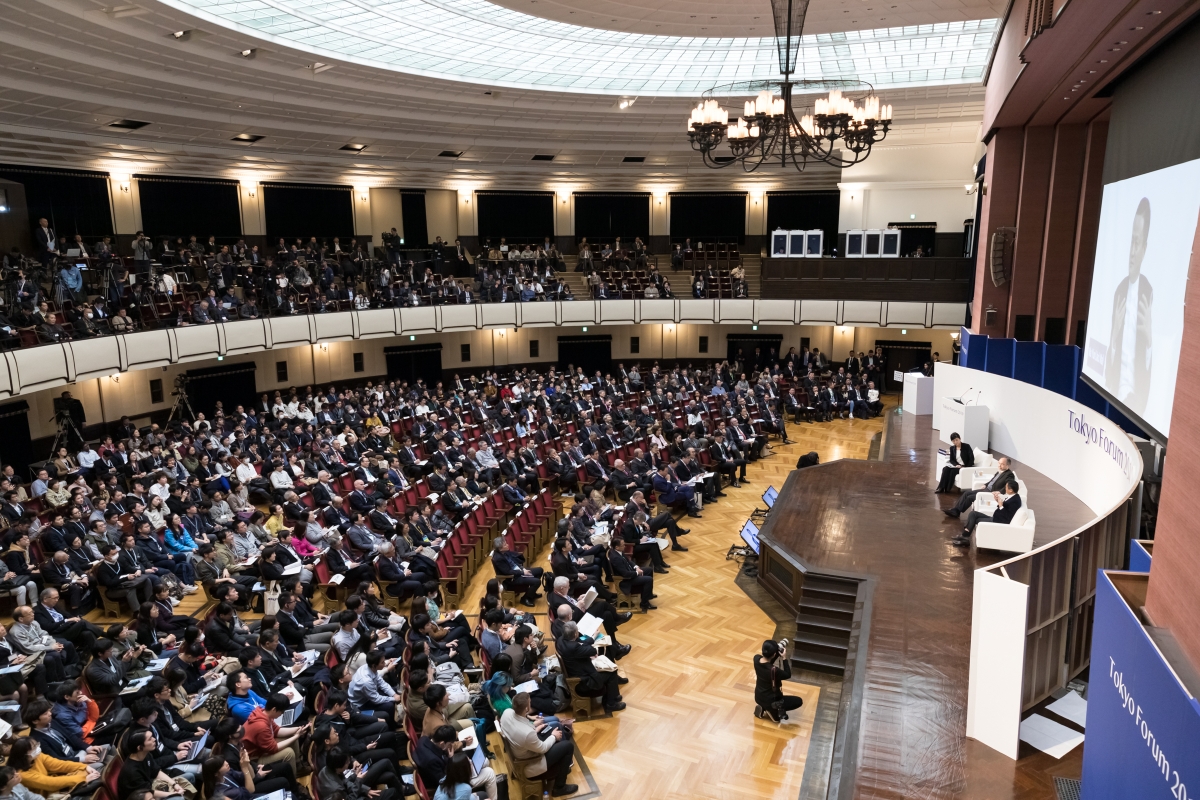 Hundreds of participants listen to a session of Tokyo Forum 2019 at UTokyo’s Yasuda Auditorium on Dec. 6, 2019.

Videos of selected events are posted on the Tokyo Forum website