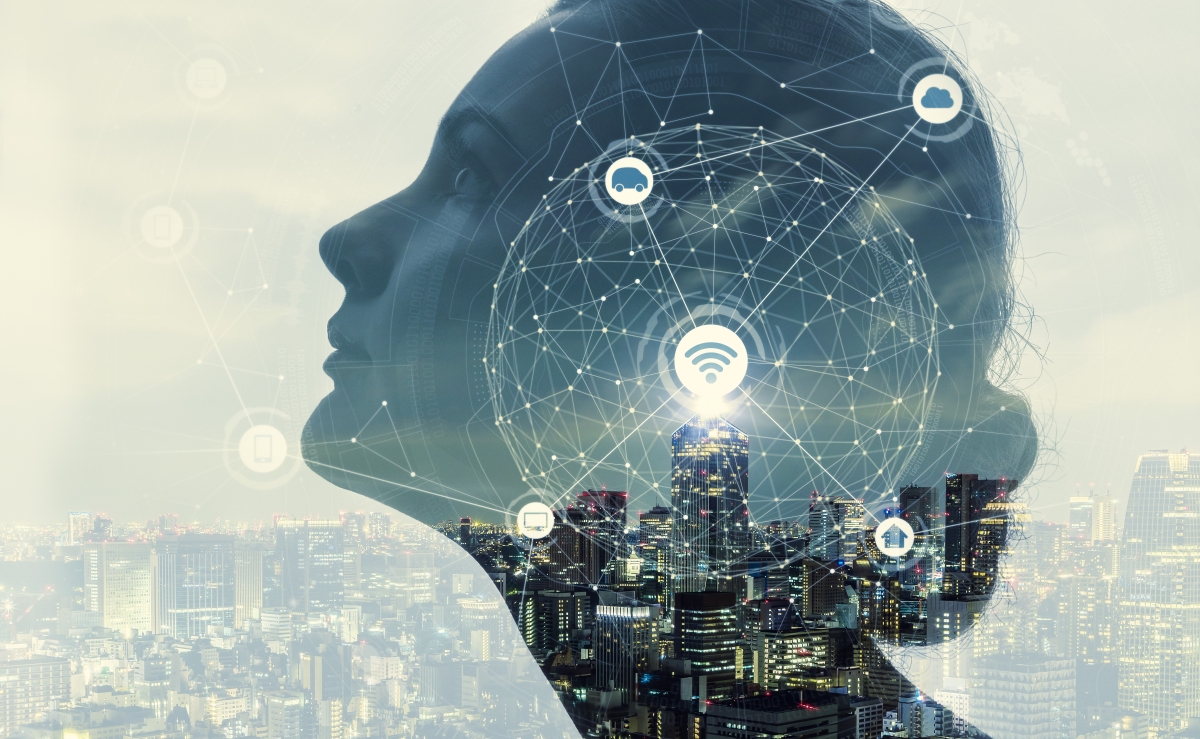 A robotic arm reaches toward a tomato plant, ignoring the green spheres to pluck only the ripest, reddest fruits. A tiny camera navigating deep inside a patient’s body scans a suspicious lump, giving the surgeon controlling the optical device remotely a real-time assessment of whether or not the swelling is cancerous. A camera scans a crowd, uploading images to a cloud computer for a possible match with those kept on a database of faces.

Many of the big questions surrounding artificial intelligence (AI) — on how to regulate, trust, harness, or even define it — have yet to be answered. Speaker after speaker at the “Digital Revolution” parallel session on Day Two of Tokyo Forum 2019, held on the Hongo Campus of the University of Tokyo between Dec. 6 and 8, 2019, made it clear that whatever it is, AI is here to stay and will only grow in importance and power.

An age of dramatic evolution

The day’s first session, “IoT, AI and Hardware Industries,” was moderated by UTokyo Professor Mamoru Mitsuishi and Professor Jian Cao of Northwestern University in the U.S. The speakers were a mix of leading figures from industry, academia and government. They described the latest accomplishments in their respective fields, which varied widely, from semiconductors to aviation and medicine to economics, and provided glimpses into the new technological wonders around the corner. The overall tone was one of curiosity and cautious optimism. UTokyo Professor Takahiro Fujimoto described the coming age of robotic innovation as a “Cambrian explosion,” comparing it to the mass appearance of animal life 540 million years ago.

Autonomous vacuum cleaners, interactive holograms and human-machine interfaces tend to dominate conversations about AI and robotics. But Philip Wong, vice president of research and development at Taiwanese semiconductor manufacturer TSMC, noted that some of the more important technological innovations are being made in less glamorous, backstage fields like recycling and emissions reduction, where his company is playing an active role. While advances in AI will no doubt bring new products to buy and services to sign up for, many of the speakers discussed how technology will help eliminate objects and activities from our lives — but in a positive sense, as these developments will demand less of us in terms of resources and time.

For instance, UTokyo Professor Takao Someya described skinlike sensors patients could wear on their bodies to transmit medical data back to their doctor or hospital. This cheap, disposable technology would allow clinics and hospitals to purchase fewer costly and bulky pieces of equipment, or do away with the need to buy them altogether. That would mean fewer in-person visits, freeing up valuable time and energy for patients.

Professor Fritz Klocke of the Fraunhofer Institute and Stuttgart University in Germany and Masahiko Mori, president of Japanese machine tool manufacturer DMG Mori Co., Ltd., discussed technological progress in the manufacturing industry, where automation has played a role ever since the invention of the power loom more than 200 years ago. Recent advances are taking automation beyond the conventional framework of having machines do set, standardized tasks, into a realm where they can assess complex situations and make independent decisions. In most factories today, for example, components have to be arranged precisely and uniformly so they can be picked up and handled by robotic arms. However, AI vision is giving a new generation of factory robots the ability to pick out the items they need from bins of parts that are mixed together randomly, in no particular order or arrangement.

In the panel discussion portion of the morning session, the speakers took up some of the knottier issues of this field, such as the human and technological limits of AI. There were lively back-and-forth dialogues regarding to what extent AI can be trusted. While some panelists believed that understanding the hows and whys of AI processes will give people the confidence to accept decisions made by AI, others noted that the algorithms and computer programs — the “brains” of AI — are in some ways beyond human comprehension, mainly due to the massive amount of data they use and the speed at which their calculations are performed. If we are unable to understand how an AI device functions, what we can comprehend is the rationality and efficacy of its decisions.

One speaker compared AI to a taxi driver. He pointed out that even though we do not understand everything about the driver or the car when we get into a taxi, we trust the concept of taxis based on our previous experience and society’s acceptance of them, allowing us to benefit from their services. Mitsuishi, in his remarks on the final day summarizing the previous day’s parallel session, suggested that humans and technology could share tasks, perhaps based on how urgently a decision is needed. “Once we understand it, we can better allocate decision-making between AI and humans,” he said.

Participants of the “Digital Revolution” parallel session at Tokyo Forum 2019, held at the University of Tokyo on Dec. 7, 2019, discuss the limits of artificial intelligence and to what extent AI can be trusted.

Needs of an aging society

After lunch, the participants returned for the second session, “AI and Healthcare,” a topic that is particularly relevant in Japan, where the population is aging rapidly. The session was moderated by Korea Advanced Institute of Science and Technology (KAIST) Professor Kwon Dong-Soo and UTokyo Professor Ichiro Sakuma. Two of the speakers — Professor Paolo Dario of Scuola Superiore Sant’Anna in Italy and Professor Russell Taylor of Johns Hopkins University in the U.S. — have been contributing to the field of medical robotics for decades. Their wealth of experience was evident in the realistic yet confident way they described the march of progress as less the appearance of groundbreaking marvels, and more the fruit of modest improvements based on careful study.

Taylor provided perhaps the day’s most succinct expression of what we can expect from AI: that it will “mediate human intention and action.” This has been a theme of Taylor’s work with surgical robots. Many of them use intelligent interfaces to replicate the motions of human hands on a microscopic scale, with tiny devices implanted deep inside a patient’s body mimicking the surgeon's surgical manipulations on equipment outside it.

Professor Pierre Jannin of Rennes University in France described how medical technology aims to achieve more with less: less time, less money, less invasiveness and less expertise. He also emphasized the importance of cultural considerations when developing new technologies, especially AI. Jannin said a helpful piece of hardware or software built to perform tasks a certain way might be adopted enthusiastically in its country of origin, but could be seen as inappropriate or even counterproductive in other cultural contexts.

UTokyo Associate Professor Kanako Harada noted that while most people see medical technology as something that is applied in diagnosis and therapy, her work focuses on using technology to improve how doctors do their jobs even before the patient enters the room. For instance, she and her colleagues have developed robots and models that mimic human anatomy so surgeons can practice common procedures before trying them out on real people.

The third and final session, “Social Science and Policy,” moderated by UTokyo Professor Hideaki Shiroyama and Project Assistant Professor Arisa Ema, left the physical world of hardware and robots to explore the “softer” realms of ethics, economics, law and government regulations as they relate to AI and other digital technologies. The tone of this session was rather in contrast to the careful optimism of the previous two, which were dominated by leading figures from the hard sciences.

The first speaker, Professor Toni Erskine of the Australian National University, described the tricky and sometimes contradictory ethical problems that come up in relation to the already existing autonomous weapons systems. She warned that AI could erode humans’ sense of responsibility over the violence perpetrated by these systems. But she also described how a military officer had stopped a test run that was damaging an autonomous mine-sweeping robot because it was “inhumane.” While there is a risk that AI will take away our humanity, it appears humans are all too ready to confer humanity on machines.

Several speakers described the difficulty of crafting government regulations for the digital industry. Professor Taylor Reynolds, technology policy director of the MIT Internet Policy Research Institute in the U.S., discussed about the efforts being made in various countries at governmental and nongovernmental levels to formulate first principles for governing AI that can provide a basis for regulations. UTokyo Professor Shigeto Yonemura said that while many nations and organizations have adopted principles that are broadly similar, he also noted that the nuances of these statements differ to a significant degree.

Professor Yi Zeng of the Chinese Academy of Sciences said that attempting to harness such rapidly changing technologies with “hard” regulations would be extremely difficult. He said a “soft” regulatory approach that includes dialogue between government and industry, as well as listening to public opinion, would be a better fit. As in the second session, the speakers noted that our desire to understand how AI works may not be realistic due to the vast disparities in capacities and speed between AI and humans. As Yi noted, regulatory demands for “transparency” in AI will be technically difficult in many cases.

In a sense, the order of the day’s sessions was analogous to the past, present and future of AI and digital technology. The first two celebrated past accomplishments in the field and the painstaking efforts that were made to achieve them. They also showed how the current areas of research and development present difficult and sometimes mysterious quandaries that will likely be solved by continued application of effort and ingenuity.

The third session, however, looked toward a future that will likely be drastically transformed by these technologies, in ways we can — and cannot — anticipate. How to prepare our legal, ethical and economic systems for this transformation appears to be a much more fraught and difficult question than merely figuring out the next steps in hardware and software development.

Videos of selected events are posted on the Tokyo Forum website.