How UTokyo moved 5,000 classes online in a month Swift action key; many students welcome and hope for continuation of web-based teaching 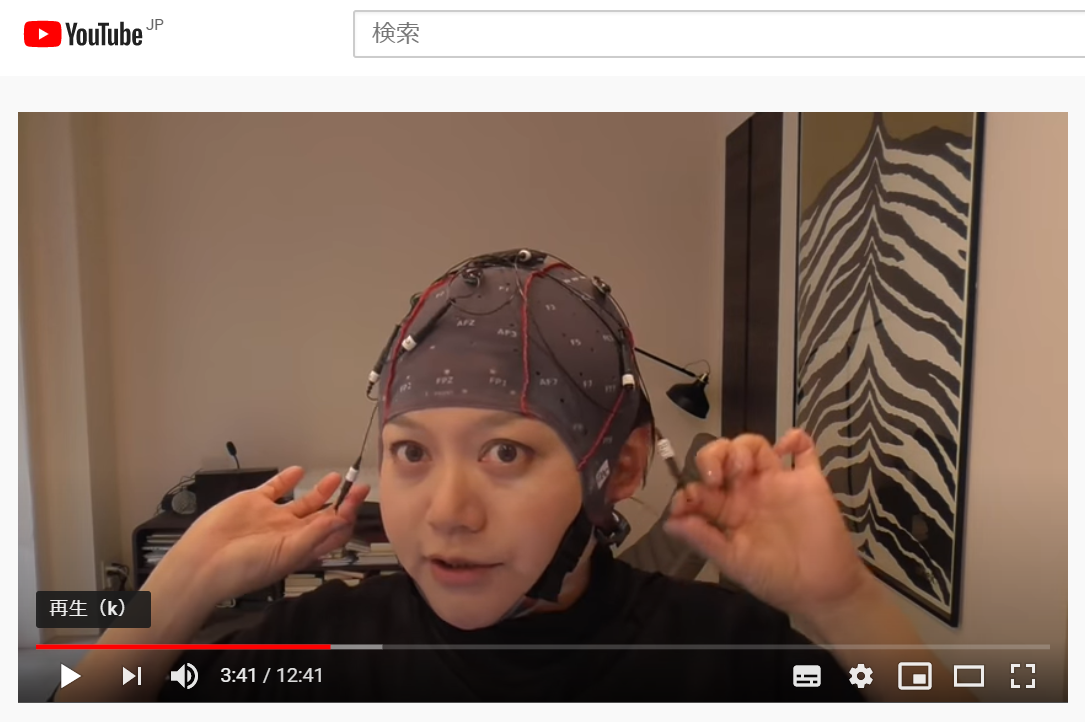 UTokyo Associate Professor Yuko Yotsumoto demonstrates brain wave measurement in a video she recorded at home and shared with students in her cognitive brain science class.

The start of the academic year at Japanese universities in April coincided with the rapid spread of COVID-19 in Japan in March, forcing them to shift their classes online.

While most institutions pushed back their academic calendar by several weeks to prepare for distance teaching, UTokyo stuck to its original calendar and has offered over 5,000 courses entirely online since the first week of April — despite the fact that, prior to the onset of the coronavirus pandemic, hardly any faculty member knew how to conduct classes remotely.

How did the university pull it off?

UTokyo officials who have played a key role in this unprecedented mass transition to online education say that experts with different roles and backgrounds came together in early March to quickly build infrastructure and a support network for faculty and students. They started offering tools and tips even before university executives officially decided to move all the classes online later that month.

Kenjiro Taura, a professor of computer science and director of the university’s Information Technology Center, has been one of these key players. He said that one of the crucial tasks for him was to let UTokyo members know of the basic infrastructure that already existed, whose use could be enhanced for web-based education. Those tools included UTAS, which students use to register for courses, and ITC-LMS, where class materials can be uploaded and messages exchanged among faculty and students. Not all faculty members used ITC-LMS before, he says.

In addition, all university members had access to G Suite for Education, a cloud-based group of Google applications, including ECCS email, as well as Office 365, cloud-based software offered by Microsoft.

What’s more, in the pre-pandemic days, most people on campus had no idea that they could teach a class of 500 students by simply connecting to videoconferencing software such as Zoom, Webex and Google Meet, Taura says.

“Most of us thought we needed bulky videoconferencing units like Polycom to have online meetings, where groups of people across five or six meeting rooms were connected via big TV screens,” he said. “Many of us had thought we might need special equipment to connect 100 or 200 students simultaneously. As it turned out, all we needed was a PC and application software.”

But swift action was instrumental to the successful transition, Taura recalled, noting that, after an internal discussion in the center in early March, he met up with Kayoko Kurita, deputy director of the Center for Research and Development of Higher Education (CRDHE) and expert on faculty development, on March 9.

During that first meeting, which was joined by Lui Yoshida, a project assistant professor at the CRDHE, they decided to host an informative session for faculty and staff on March 13. On March 11, they set up Utelecon, a web portal aimed at providing information about online courses and web conferences, such as how to introduce Zoom and other online tools in the courses.

In the early days, many people had trouble logging into professional Zoom accounts that the university made available to all of its members, they said.

Despite the short notice, the March 13 seminar —  held in a conference room on the Hongo Campus and streamed via Webex, and where Executive Vice President Hiroo Fukuda gave opening remarks, expressing support for online education — was attended by over 350 people. That was followed by another session on March 19, held via Zoom. Interest from faculty was so huge that the number of participants quickly topped the capacity of 1,000. Kurita and Yoshida recorded the session and made it available for those who could not join. 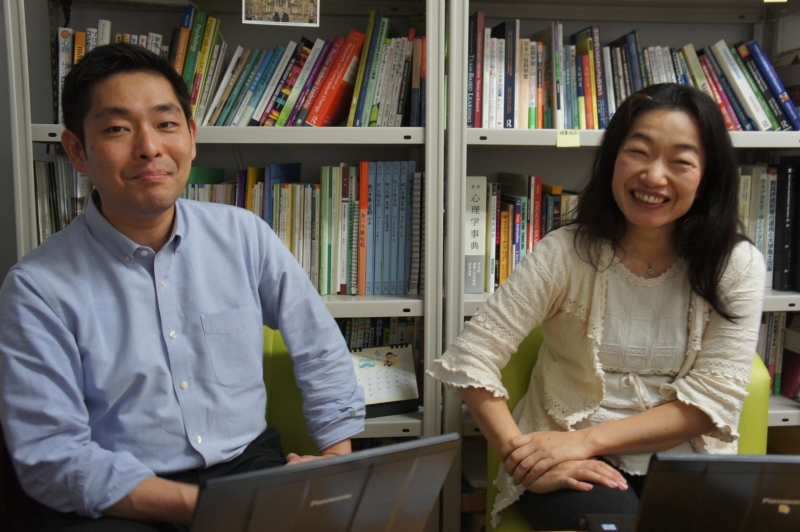 After the semester started, Utelecon operators launched a weekly luncheon seminar series to share experience and know-how. The 40-minute luncheon sessions, which any UTokyo member is free to join, have been held 12 times as of the end of June. They have featured various topics, such as organizing group work, saving the volume of transmitted data, evaluating students and accommodating students with special needs.

Furthermore, the university instituted the “class supporter” system, through which students have been hired to assist instructors, such as by testing Zoom settings beforehand and monitoring audio quality during class and reporting problems on the spot. So far, class supporters have been utilized in 440 courses, Kurita said. 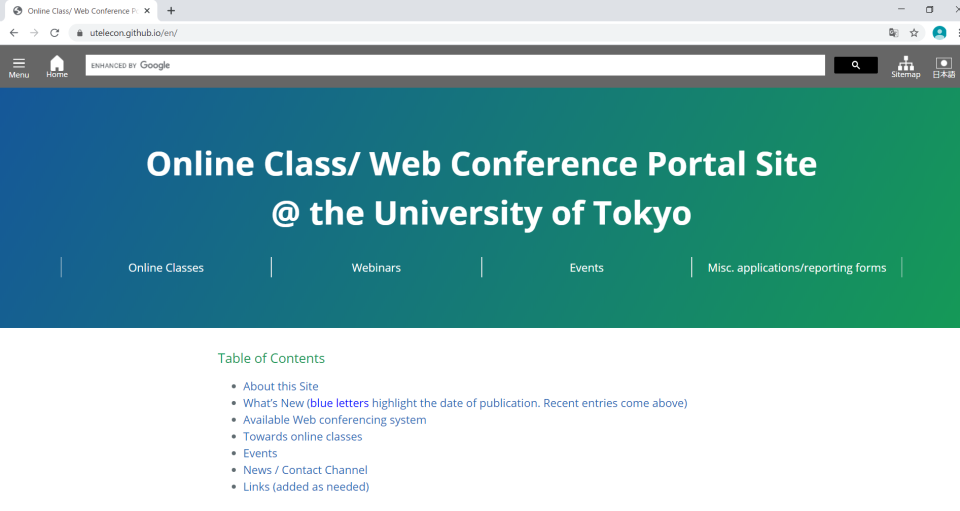 The English home page of the web portal Utelecon. Anyone can access the portal, but a login by an ECCS cloud email account is necessary to view recorded sessions.

The “common supporter” system, meanwhile, was launched in mid-May. About 50 students have been hired to develop a chatbot for the Utelecon website and work as operators for queries that bots have trouble answering. On average, 5,000-7,000 people access Utelecon per day, out of which 50 or so ask questions through the chatbot, Yoshida said.

The creation of the chatbot helped reduce the number of email inquiries flooding the portal, which had dealt with over 5,000 inquiries by then, Kurita said.

Meanwhile, preparations to welcome new undergraduate students kicked into full gear as a task force was established on the Komaba Campus on March 12. Each year over 3,000 first-year students join the campus.

Yuko Yotsumoto, associate professor of experimental psychology at the Graduate School of Arts and Sciences, leads the team managing the enrollment process there.

“We scrambled to resolve a variety of issues at hand, such as getting IDs to the students, getting them registered for classes and organizing orientation sessions online,” Yotsumoto said. Komaba now offers some 2,500 courses online.

Many students seem to have adapted well to drastic changes in the environment. In fact, a majority of students have been happy with their online classes, according to Yuna Takei, a second-year student at the College of Arts and Sciences who recently surveyed students for an article she wrote on UmeeT, an online news site run by UTokyo students.

In late April, Takei asked UTokyo students about their experience of online classes so far. Of the 70 students who responded, 74 percent said they were either “satisfied” or “satisfied to a certain degree” with the classes, compared with 7 percent who said they were “a little unsatisfied” and 3 percent who were “unsatisfied.” The remaining 16 percent rated the classes as “standard.”

Many also commented that they found online classes to be more convenient and efficient, largely because they didn’t have to commute. They also found the “chat” function of Zoom easier to pose questions than doing so face to face, Takei said, quoting the results.

“I myself was surprised by the result,” she said. “I realized that many people prefer online instruction over offline teaching in lecture-based classes, and they also wished them to continue as an option even after the pandemic is gone and we return to the campus.” 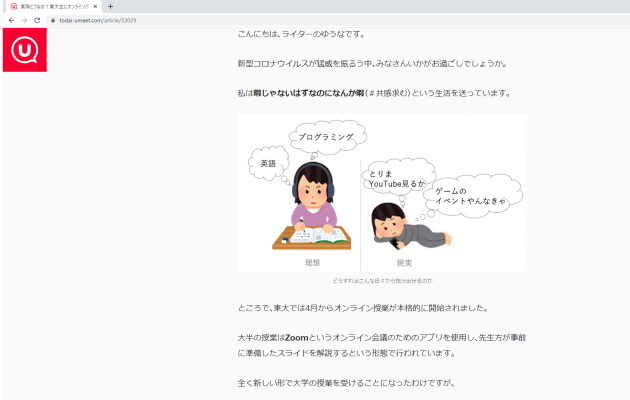 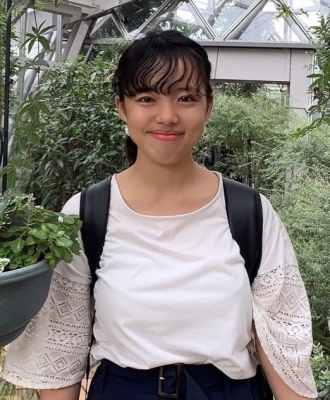 The survey, on the other hand, found that online classes have room for improvement. One of the requests from students was that instructors offering live lectures make their video recordings available so students can watch them later. The situation is especially dire for students with unstable WiFi/Zoom connections.

“I find that online classes meet students' needs to understand the content,” Takei said. “It’s actually quite comfortable taking classes from home, as, unlike in large classrooms, we can see what’s written on the blackboard clearly. I miss not being able to meet friends face to face, but I have enjoyed chatting with them online.”

While students have not been able to carry out experiments in labs, some professors have come up with ingenious ways to continue teaching how to conduct experiments. For one, Yotsumoto, who teaches a cognitive brain sciences course, has demonstrated brain wave measurement by wearing a wireless headset and showing readouts of electrical signals from different parts of the brain on a PC. She recorded the process at home and uploaded the video on YouTube, for viewing only by her students. The students were then asked to write reports on it.

Yotsumoto acknowledged that some courses involving chemical experiments and supercomputing can be taught only on campus, saying faculties need to make up for lost opportunities in the autumn semester.

Yotsumoto also warned that it’s too early to call UTokyo’s effort a resounding success, adding that new challenges keep popping up. She is now especially worried about the increasing volume of assignments for students and the psychological toll that months of remote learning have had on them, saying the university should remain attentive to the needs of students.

“I once asked my students to send comments anonymously,” she said. “One of them confessed to being on the verge of a nervous breakdown. While many students have adapted, some others are stressed out from not being able to come to campus or mix with friends in student clubs. Campus life is just as important as classroom activities.”

Taura notes that the overall popularity of online education is a somber reminder of traditional classes’ failings.

“We must all remind ourselves how students must have felt before, when professors packed a large group of students into a room and forced those in the back rows to read tiny scribbles on the blackboard,” he said.

Taura envisions a post-pandemic learning environment where students are taught in a “hybrid” fashion. Ideally, students would be able to take classes from home on some days, while coming to campus on some other days for lab experiments and group discussions, or for extracurricular activities. It would be best if students are given the option of taking classes online somewhere on campus, he said.

“A hybrid-style education is quite challenging to put in place as it requires drastic changes to course timetables, so it’s easier said than done. But if we just revert to the old styles of teaching, I think everyone would wonder, ‘What was this whole experience for?’”

Web-based education can be a plus for some students who feel anxious in social settings, as they can be spared the trouble of entering and being in the same classroom with others, she said.

Students using wheelchairs can also take classes without having to worry about daily weather conditions.

Also, distance learning can work well for students with developmental disorders that often cause them to be distracted by noises in their surroundings. With remote learning, many students can now study at their own pace, playing back recorded lectures as many times as they like.

“Online education has probably improved accessibility for some of them,” Nakatsu said. 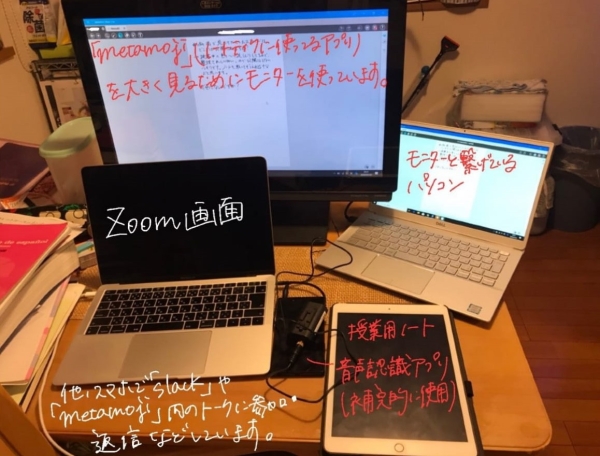 A picture showing what distance learning is like for hard-of-hearing students at UTokyo, provided by one such student. Courtesy of Disability Services Office

The transition has been difficult, however, for deaf and hard-of-hearing students, Nakatsu said, noting that her office has provided a variety of tools to ease their accessibility problems.

One of the tools is UD Talk, voice recognition software that can be used both on smartphones and iPads. The software automatically converts speech to text on a real-time basis, and where there are recognition errors, student supporters hired by the office can correct them on the spot while viewing lectures live on Zoom. Another way to share information is using Google Documents, in which student supporters take notes during class to share with the students in need. 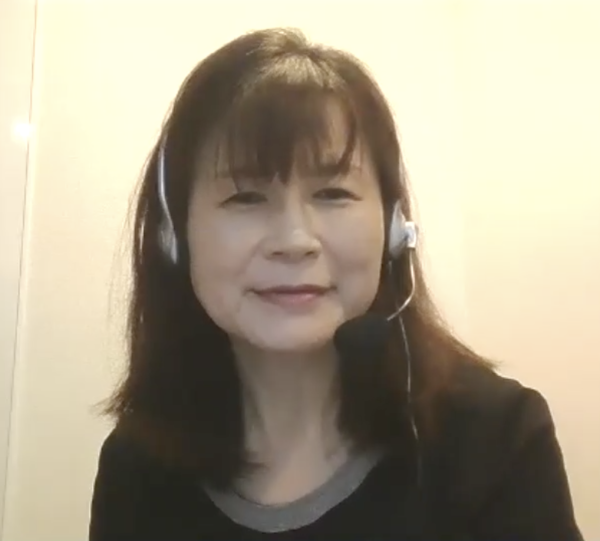 With all the tools, however, some students with hearing issues may not be able to obtain enough information, she said, noting that the need to concentrate on visual information — often involving several devices at the same time — puts extra strain on their eyes.

“In offline classrooms, student supporters sit next to students in need, so they can help students on the spot, but such help is hard to come by online,” she said. “It would be helpful if professors giving the talk avoid using words such as ‘this’ and ‘that,’ and speak clearly and slowly to the students.”