Preparing for disaster: How to protect yourself and others UTokyo experts share experience, knowhow at Science Agora 2020 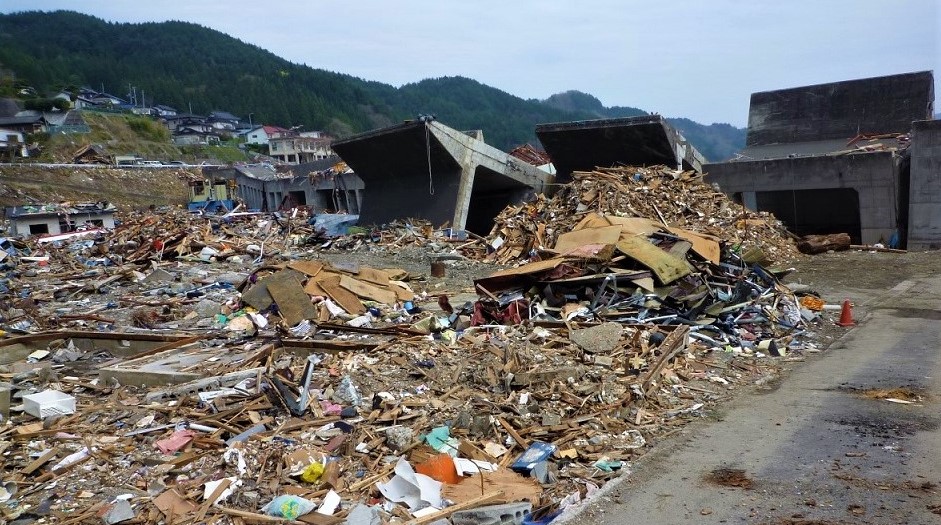 A coastal area in the city of Kamaishi, Iwate Prefecture, which was ravaged by the March 2011 Great East Japan Earthquake. A sea wall helped lessen the impact of the tsunami that struck the city, but not enough to prevent damage to people and houses in the area. Courtesy of Muneyoshi Numada

Few people in disaster-prone Japan would dispute the fact that we all need to work on reducing risks of disasters to protect ourselves and others. Yet, people often neglect to take preparatory action, thinking that it is somebody else’s problem. What can we do to change such a mindset?

On Nov. 15, 2020, UTokyo experts who participated in the webinar “DIY Disaster Preparedness to Protect Yourself and Others” discussed a range of factors compounding the problem. The 90-minute session, part of the science communication event Science Agora 2020, was attended by around 30 people and was also broadcast live on YouTube.

Associate Professor Muneyoshi Numada from the Institute of Industrial Science (IIS), who served as the session’s moderator, said disasters can be roughly broken into two types: ones that occur with little advance warning such as earthquakes and tsunami, and ones that take time to develop, thus allowing us to predict somewhat in advance the extent of their damage. Typhoons, heavy snow and floods fall into the latter category, he explained, noting that the impact of a disaster hinges on a combination of the natural hazard and the system and characteristics of the community hit by the hazard.

Hiroe Miyake, an associate professor at the Earthquake Research Institute, outlined three steps necessary to lower disaster risks on an individual level: learning, measuring and preparing. To “learn,” she said it is important to know how earthquakes can cause different kinds of damage, such as destruction of structures, tsunami, ground deformations due to fault movements, and long-period ground motion caused by an earthquake in a distant location.

To “measure,” Miyake described new technologies that help us understand earthquakes better, such as remote sensing through satellites and using sensors built into smartphones as earthquake detectors. Then she cited efforts to “prepare,” such as by creating a risk map based on population density and other data simulating damage from a future quake.

Professor Kei Yoshimura, also from IIS, talked about flood prediction. Floods cause an average annual damage of over 10 trillion yen worldwide, an amount as big as the cost of earthquake damage. One of the challenges is to issue warnings early and thereby give people enough lead time to evacuate; in a recent case, Japan’s Meteorological Agency could only issue a flood warning two hours before the river banks ruptured.

Yoshimura and the Japan Aerospace Exploration Agency are currently jointly developing Today’s Earth, a computer system through which they can simulate soil moisture and river discharge on a near real-time basis. With the system, predicting floods 30 hours before they occur is becoming possible.

But because of Japan’s “single voice” policy, which allows only the Meteorological Agency to issue flood forecasts, third-party institutions are currently banned from doing so. 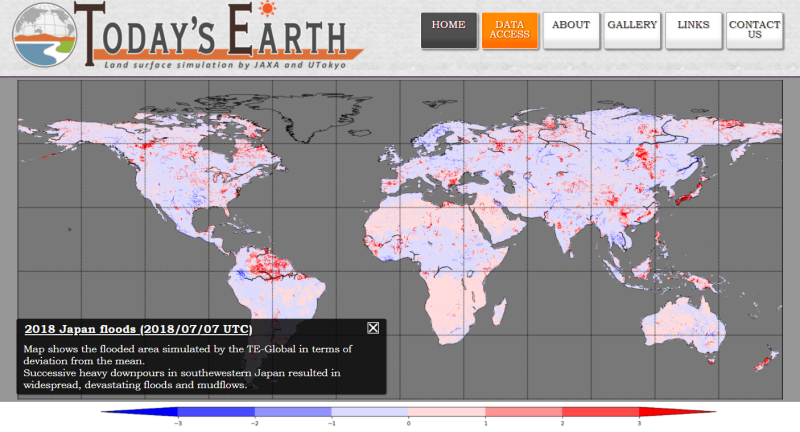 The top page of the Today's Earth website, through which river discharge and flood areas can be monitored worldwide on a near real-time basis.

However, “multivoice” flood predictions might become available in the near future. Due to a spate of flooding caused by heavy rain in recent years, the government is reportedly considering allowing research institutions and private agencies to issue flood forecasts.

Yoshimura said single-voice and multivoice systems have their own merits and drawbacks. But the multivoice system would allow citizens to choose information from different sources and thus let them prepare for risks in DIY style.

“I would like people to understand that a society where each one of us would pick which forecast to follow is approaching,” he said.

What about action to stem the spread of the novel coronavirus, which is raging worldwide?

Kaori Muto, a sociologist and professor at the Institute of Medical Science who has served on advisory panels for the national and Tokyo metropolitan governments on COVID-19 measures, shared the results of a preliminary web survey of citizens in Tokyo conducted in mid-October 2020.

The results showed that citizens had been more attentive to COVID infection risks and taking the right precautions in the summer, than in the autumn, when the survey was taken.

Of the 935 respondents, those who said they were more attentive in the summer to “obtaining information about the number of infected people in Tokyo” was 25.7%; “choosing to go out at times and to places that are less crowded” was 14.1%; and “avoiding the 3Cs (closed spaces, crowded places and close-contact settings)” was 18.2%. This suggests that citizens are experiencing COVID fatigue and losing interest in preventive measures, Muto said.

Numada points out that people tend to have two conflicting attitudes toward disaster preparedness: When they discuss in public how to protect themselves and others from disasters, they agree on the need for early-stage evacuation, securing furniture from falling, and following steps to lower risks of COVID infection; but in private, they are influenced by emotions as well as the history and underlying culture in their region.

They often fall prey to the so-called normalcy bias, which leads people to doubt or minimize warnings by making them believe they will somehow be fine, and majority syncing bias, where people think “Nobody is doing it, so why should I?” and feel safe by acting the same way as others around them, Numada says. Furthermore, some people are resigned to thinking that they “wouldn’t mind getting killed by earthquakes,” he said. 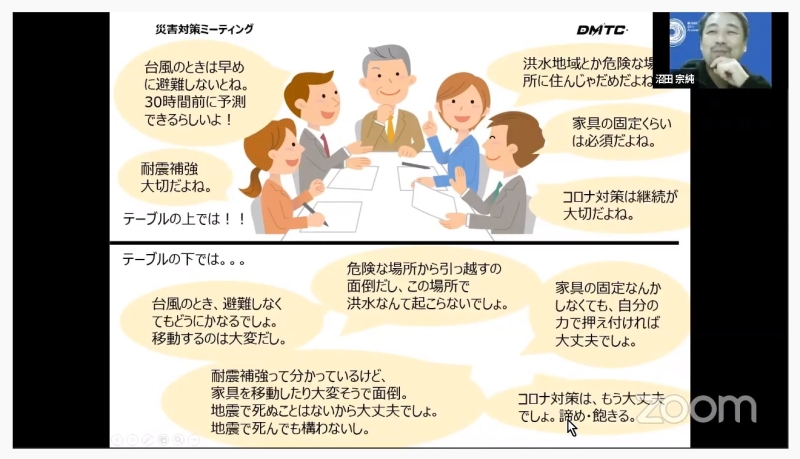 In the March 2011 Great East Japan Earthquake disaster, numerous volunteer firefighters were swept away by the tsunami and died while trying to convince reluctant residents to evacuate from their homes, Numada said, noting that introducing monetary incentives might prod some citizens to act.

“How about introducing evacuation insurance?” Numada pondered during the webinar. “It is a simple idea aimed at meeting people’s egoistic desires, rewarding evacuations with money. Maybe we should consider social systems that directly appeal to such desires.”

“In March 2020, members of the Expert Meeting on Novel Coronavirus Disease Control including me issued a message, calling on young people to avoid certain behavior to protect elderly family members and other loved ones. Then we were swamped with comments on Twitter saying, ‘Don’t put the blame on young people.’ Some people even said that they don’t want to save others. Behind such comments are convictions (among young people) that they won’t get severely sick from the virus or they will not catch it, and that they will remain asymptomatic even if they contract the disease.

“I think that it comes from thinking among people that disaster is someone else’s problem and that they would be rarely affected,” Muto said.

What can we do to protect our own lives?

While there are no easy answers, experts said officials in charge of different disasters can learn from each other and come up with universal programs. For example, communities across Japan have long conducted fire drills and nurtured local disaster prevention leaders; these initiatives can be expanded to cover infectious diseases, Muto said, adding that local leaders can propagate what is truly effective to keep the coronavirus at bay.

During the webinar, a member of the audience asked what factors the head of every household should weigh when deciding the timing of the household’s evacuation.

“The ongoing COVID crisis will dramatically change the existing frameworks of crisis management and disaster prevention,” Numada said as he summed up the webinar.

“We should continue to discuss how far individuals should go in trying to prevent disasters and how we should learn from evolving technologies.”