Field of dreams: If you move an ion, power will come UTokyo chemistry professor advises young to follow own curiosity 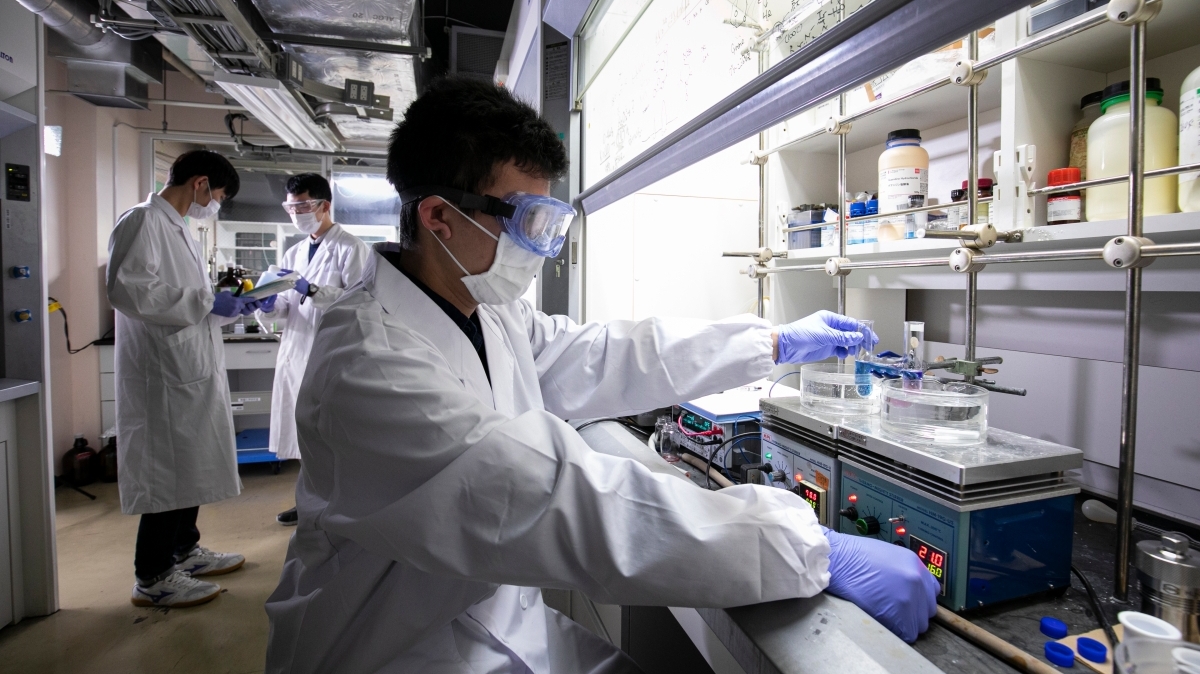 Students in the lab of Professor Teppei Yamada at the Graduate School of Science carry out an experiment on a device used to help them develop a new type of battery.

Generating electricity by moving a single molecule. Using subtle changes in body temperature to power a wearable device or a new type of battery cell. Sound too good to be true? No, such technologies could soon become part of our lives, according to Professor Teppei Yamada at the Graduate School of Science.

Yamada, an electrochemistry expert who moved to UTokyo from Kyushu University in May 2020, studies how to convert the bonding and debonding of molecules at different temperatures into energy.

His foray into science began early, when he was an elementary school student in Chiba Prefecture east of Tokyo. A number of introductory science books he pored over at a local public library sparked his interest in the field, he says.

“My parents were both working so I used to attend a gakudo (after-school program),” he recalled. “When the program ended after the third grade and I was separated from my gakudo friends, the local library was the only place I could hang out at after school. So I read a bunch of books there, including books on rakugo traditional Japanese storytelling, a puzzle series by U.S. mathematician Sam Loyd and science books for children. I also read A Brief History of Time by British physicist Stephen Hawking in translation.”

The science aficionado, who also liked playing shogi Japanese chess, went on to study at UTokyo. While he was also interested in physics, Yamada chose chemistry as his major, intrigued by “the sense that in chemistry, various reactions were happening before people understood why they were happening.”

In the inorganic chemistry lab at the Faculty of Science, then headed by Professor Hiroshi Nishihara (now professor at Tokyo University of Science), he toiled at creating a new chemical compound and analyzing its molecular structure through X-ray crystallography.

“My biggest motivation at the time was to create a new compound and observe its shape on a molecular level, rather than creating a chemical that could be useful to society,” Yamada said. “Confirming the molecular structure of the compound was hard. The compound gets easily broken when exposed to air, so I had to make it inside an airtight glass container. Once I had refined it to form a clean crystal, I would analyze the structure using X-ray.” He created the compound, called a cluster complex, by mixing metals, such as cobalt, iron and nickel, with sulfur.

At the Graduate School of Science, he continued research on this new complex, checking to see if it had any practical applications, like as a catalyst. He found that the complex changes color when it’s cooled, so he cooled it down to minus 200 degrees Celsius and monitored its color changes.

Such endless, “seemingly purposeless” experiments, which constitute fundamental research, can lead to the discovery of useful materials down the road. In fact, several years later, when Nishihara took this complex Yamada developed and turned it into a thin, single-layer sheet, the complex was found to be a topological insulator, a material that behaves as an insulator inside but its outer surface is a conductor, meaning electrons can move along its surface. In the world of physics, topological insulators were an extremely hot research topic at that time, Yamada said.

After finishing his master’s degree in 2003, Yamada got a job at the research unit of Mitsubishi Chemical, a major chemical company, where he was involved in the development of lithium batteries. But his “admiration for academia” never waned. So a couple of years later, when Professor Hiroshi Kitagawa, then at Kyushu University, whom Yamada got to know through joint research, contacted him about a position at the university in southern Japan, he didn’t hesitate to get back into academia.

At Kyushu University, where he obtained his Ph.D. in 2010, he was involved in fuel cell research, particularly creating “membranes” from metal and organic materials. The membranes, called metal organic frameworks, look like jungle gyms and work like “cages” to conduct protons, or positive hydrogen ions (H+). Proton conductivity is key in improving the efficiency of fuel cells, as they make hydrogen ions easier to move inside the cells. Yamada says it was around this time he began to fully understand how exciting fundamental research can be.

“Proton-conducting metal organic frameworks were getting a huge amount of attention among researchers at that time,” Yamada said. “A lot of teams, including those from China and India, followed our research. Many scientists hate to have their research copied by others. But I found it exhilarating. I think it’s great that your research is imitated by others, because it means your work is important enough and is making an impact on the world. If the role of engineering is to enrich the world with products, I think the role of basic science is to change the world with ideas.”

Since around 2015, Yamada has explored ways to raise the efficiency of thermo-electrochemical cells, or thermocells. He says no other research groups in Japan are studying this type of energy-harvesting device, claiming that his research is “truly original.”

Thermocells produce electricity by creating a “chemical equilibrium,” a state where the rate of the forward reaction (oxidation) equals the rate of the backward reaction (reduction). When two electrodes at the sides are set at different temperatures, it prompts ions to move to the cold side, allowing the electrons to escape to the outer circuit and produce electricity.

Yamada has succeeded in accelerating redox (oxidation-reduction) reactions by adding cyclodextrin, which, like starch, consists of a cyclic chain of glucose molecules.

In fact, cyclodextrin is a major ingredient in air fresheners and other household odor eliminators. It binds with and holds odorous molecules inside. Yamada’s device applies the starch test, an old school science experiment, where a cut potato, containing starch, turns purple when a drop of iodine is added.

He explained the reason such household products can remove an odor is because cyclodextrin can trap odorous molecules inside. He continued: “On the other hand, when an iodine-dropped potato is heated, it loses its purple color. That’s because iodine is let go from starch when it is heated. Likewise, at a high temperature, triiodide ions are released from their host cyclodextrin. Our system works like a ‘molecular robot’ as it can produce energy through this catch-and-release cycle.”

Thermo-electrochemical cells are not a new concept; Yamada says they have been around for about a century. But until recently, few researchers paid attention, because the amount of energy produced was small, in the order of nanowatts (billionths of a watt). That changed with recent advances in research, and the conversion rate has increased dramatically. Now about 10 groups in the world, including Yamada’s, are active in this field, he said.

Thermo-electrochemical cells are part of “green chemistry” as they can keep producing electricity where temperature differences exist and redox reactions are promoted. One possible application Yamada has in mind is a wearable sensor. A heartbeat monitor can be attached to an elderly person or a baby, and the sensor can be powered using the subtle changes in their body temperatures, he says.

When the wearer’s heartbeat stops, for example, the device could send a signal to a third party monitoring their condition, he said. It might also be possible to power a small cooling fan people hang from their neck, using their body heat, he added.

“What is interesting about electrochemistry is that you can develop a device using just one or two chemical equations,” he said. “Lithium-ion batteries use only two equations, and they are now all over the world. Chemical reactions can create an industry. That really excites me. My goal is to change the world with a new device, with a new chemical reaction.”

Yamada says he has been driven by curiosity to learn more about the world. He advises young students to follow their curiosity and interests, too.

“If you choose a career because ‘this field looks more lucrative,’ you would most likely end up hitting a dead end," he said. "Such fields attract more talent, so the competition would be extremely intense. They might turn out to be not lucrative at all. I would say, choose your career based on what you are really interested in. I think that would help enrich your life in the end.”

While feelings of anxiety hover over many people under the COVID-19 pandemic, Yamada says now is the time to maintain a positive outlook.

“Isaac Newton was forced to go back to his hometown during the Great Plague of London, as his university was closed for two years,” he said, referring to the bubonic plague of 1665-1666. “It’s said that during this period he saw an apple fall from a tree and came up with his theory of gravity. So I’ve been telling my students that one of you might turn out to be the next Newton. Right now (because of the pandemic), there are so many problems in society. Where there are problems, science can offer solutions.”