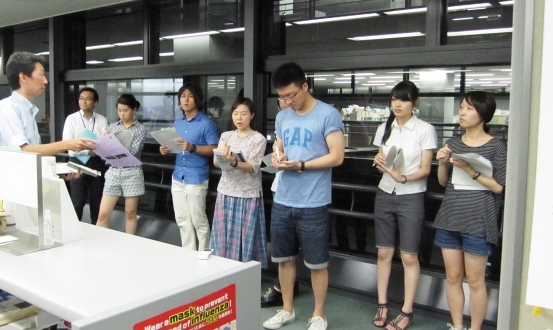 Students participating in the project visited the municipal office, where they pointed out the need for multilingualization and also learned a bit about Japan’s administrative system.

“International students face difficulties with procedures at the municipal office, like those related to resident registration, taxation, pension, children’s education and so forth,” she explains. “These procedures are based on self-assessment, so those who do not submit the documents properly will be at a disadvantage.”

This issue was discussed within the University, and it was concluded that simply urging the municipality to provide information in multiple languages was unlikely to improve the situation. They therefore considered if there was anything they could do at UTokyo, and what they finally decided on was to utilize the language abilities of UTokyo students.

“In August 2015, we formed a team comprising six international students and two Japanese students, and had them translate the Japanese documents published by Bunkyo City into English, Chinese and Korean. It is worth noting that this was not a free translation service, nor was it a project contracted out by the municipal government. This was thoroughly a joint effort with the city.” 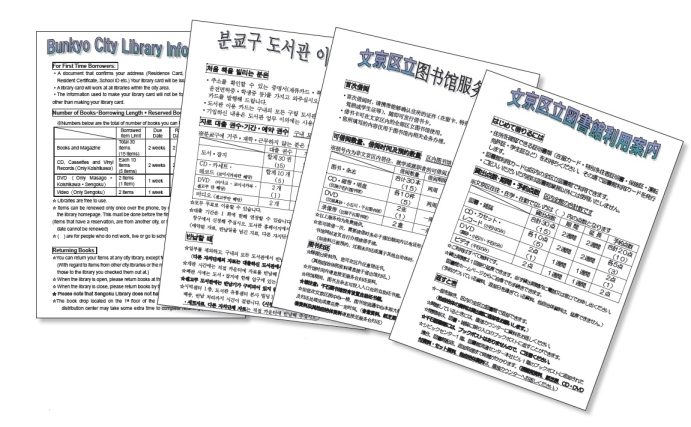 This guide for the Bunkyo City Library was translated into English, Chinese and Korean by the student team, and the foreign language versions are still in use.

The collaborative nature of this translation work has benefited those on both sides of the project. On the government side, administrative officials have become more aware of linguistic gaps that may prevent foreign nationals from understanding the exact meanings of Japanese words. For example, some languages do not have an equivalent to the Japanese term “kaigo” (caregiving), the differences between hoikuen (nursery schools) and yochien (kindergartens) are difficult for some non-Japanese to grasp, and some do not understand the concept of “gakku” (school districts), which may not exist in their countries. Meanwhile, the project has given participating international students first-hand experience to improve their understanding of Japanese culture and social systems.

“The project has ended for now, but we are using this opportunity to translate real estate contracts in cooperation with the Bunkyo branch of the Tokyo Real Estate Public Interest Incorporated Association. Also, we are introducing international students who can provide language support for children from overseas to the local board of education.”

Ms. Harada continues to push for multilingualization in the belief that it will lead to a better multicultural society.