A niche at UTokyo | Discover Our People

Driven by her love for basic science and the thrill of conducting experiments, Professor Beate Heissig journeyed from Germany to the United States, and then on to Japan to discover her niche. At UTokyo’s Institute of Medical Science, she has accomplished her dream of running her own laboratory, where she studies proteases and guides students in their research. Her transformation from medical doctor in Germany to scientist in Japan began with a little “midnight science”... 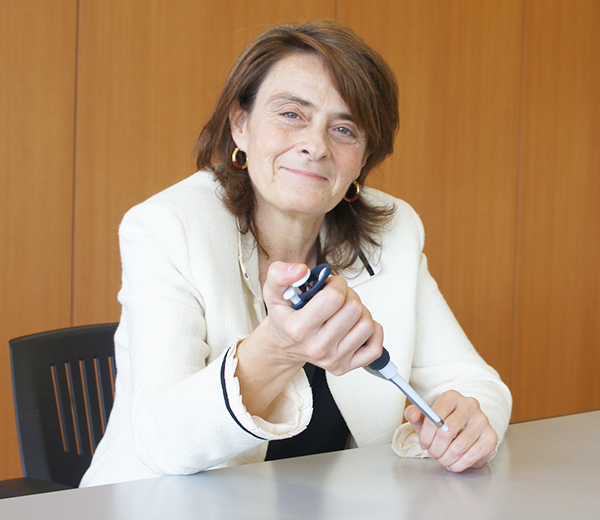 After graduating from medical school in Germany, I worked as a doctor in the fields of hematology, transplantation medicine and oncology for several years. I also had some experience working at the National Transplantation Center in Germany. But, in the end, I realized that clinical experience like this didn’t satisfy me; I was more interested in the idea of carrying out research. So, I jumped at the chance to do some of what I would call “midnight science.” The institute at which I worked allowed doctors to use its labs after work and during free weekends. I took advantage of this, conducting experiments and creating data. I got the chance at one point to present my data at an international meeting, where I met a researcher from the United States who talked with me about my research and shared some of his own findings with me. This led to him inviting me to come to his lab in the US. I excitedly agreed, and he became my supervisor!

I went to New York to work in his lab at the Memorial Sloan Kettering Cancer Center for two years. Then, I moved to Weill Cornell Medicine, which is just across the street, where I worked with a very enthusiastic principal investigator (PI). He not only shared his excitement of science with me, but also gave me a lot of guidance about writing papers and otherwise getting my science in the proper format. In both labs, I continued with my research on hematopoietic stem cells, which I had started back in Germany. However, in my post-doctoral supervisor’s lab, I set my own route which pointed me towards the direction of my future research: proteases and their involvement in stem cell regulation, tissue regeneration and cancer.

Before I went to the US, I wasn’t sure whether I wanted to continue with my life as a medical doctor or pursue a career in science. I had a clinical position waiting for me in Germany, so it wouldn’t have been difficult to get back into the practice. After my two years at Sloan-Kettering, however, it was clear that a basic scientist is what I wanted to be. The three years I spent at Cornell only cemented that decision.

After five years in America, it was time for Professor Heissig to take the next step in her career path. While she had job offers in the US, she decided to come to Japan.


Japan has systems that I was not at all familiar with, so when I first arrived, I had to overcome a lot of challenges. My husband is Japanese, and he supported me for a long time by helping me in getting used to Japan, finding a position, and introducing me to others in my research field. I worked at Juntendo University for a year before coming to the Institute of Medical Science at UTokyo (IMSUT).

I was fortunate enough to be accepted into a MEXT-funded program called Frontier Science, which offered young scientists the opportunity to become established researchers at IMSUT’s Center for Stem Cell Biology and Regenerative Medicine. This program, which I was in for nearly five years, gave me funding, supported my science, and helped me to get a time-limited tenure position as an assistant professor.

I run my own lab, where our research focus is on proteases. Proteases are enzymes that affect the activity of proteins. They can influence various biological processes, including stem cell fate, cancer growth, tissue regeneration and also inflammation. Using the proteases as tools to understand such processes could lead to identifying markers or therapeutic agents which can, for example, prevent cancer growth, increase tissue regeneration, or expand stem cells.

After living and working in Japan for over a decade, I have experienced how people’s perceptions of me have changed. Because I came from overseas, some of my peers were not sure at first if I would stay in the country or eventually leave. Over the years, however, I have shown my commitment both to my research and to this country, so people now realize that I am here to stay. I was always confident that my scientific achievements would be evaluated in the same way no matter where I was in the world.

I have also noticed changes within IMSUT over the time I have worked here. For instance, I see more and more international students and researchers these days. When I first came here, there were so few that it seemed like you could count them on one hand! There is especially an increase in the number of those from countries that don’t use kanji (Chinese characters).

The Japanese language, I believe, is a significant challenge for those coming to research or study in Japan. Likewise, it is a challenge for the Institute to accommodate people who are not fluent in the language. Small steps have been taken: emails from the department that were important for international students used to be only in Japanese, for example, but now many of them are written in both Japanese and English. I feel that this is a really positive development. However, the number of foreigners like me reaching the faculty level is still very small, so this service does not exist yet for us. Similarly, a decade ago, applications for research funding had to be filled out completely in Japanese, but this has also changed for the better.


Working as a mother and a researcher 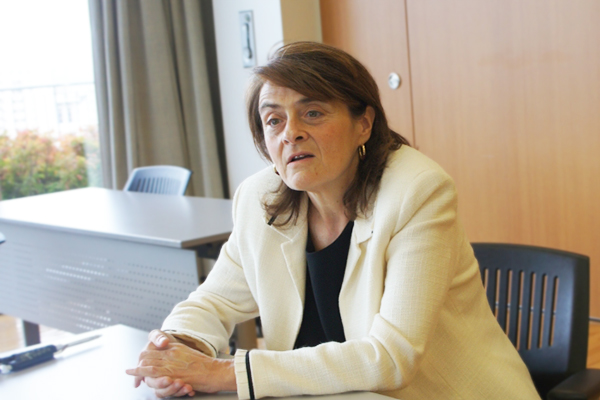 Speaking of the Japanese language, I have a favorite kanji: 弘 (hiromu). It means “expanding,” as in “expanding knowledge” or “expanding liberty.”

As for being a mother, it’s challenging to juggle both motherhood and working as an international researcher. Before my son was born, I never felt any inequality. I would see male researchers conducting the same science and going to the same conferences that I was. However, becoming a mother changes everything. The University has a nursery, which my son loved when he was younger. I couldn’t be away from him for long periods of time, though, which meant that I was unable to attend meetings that were outside of Tokyo and would last longer than a day. This reduced my interactions with the science community dramatically. Japanese researchers tend to have family here, so they have a support network of relatives who can take care of their small children. However, as an international researcher, this was something that I really struggled with. Now that my son is getting older, it’s becoming less of an issue.

I think that international researchers in Japan can be divided roughly into two categories. One is the type that pops into Japan, does a two-year program, and then goes back to their country. I think that is a very safe route. Then, of course, there are those that get excited doing science here, and really want to establish themselves. That is the second category of international researchers. I think for those in that category, to which I also belong, there are many additional things to consider from an institutional perspective. I feel that for true internationalization, dedicated support systems must be established for this second category of researchers. I believe that UTokyo encourages internationalization and has made great strides in recent years in this area.

Come Early and Find Your Niche 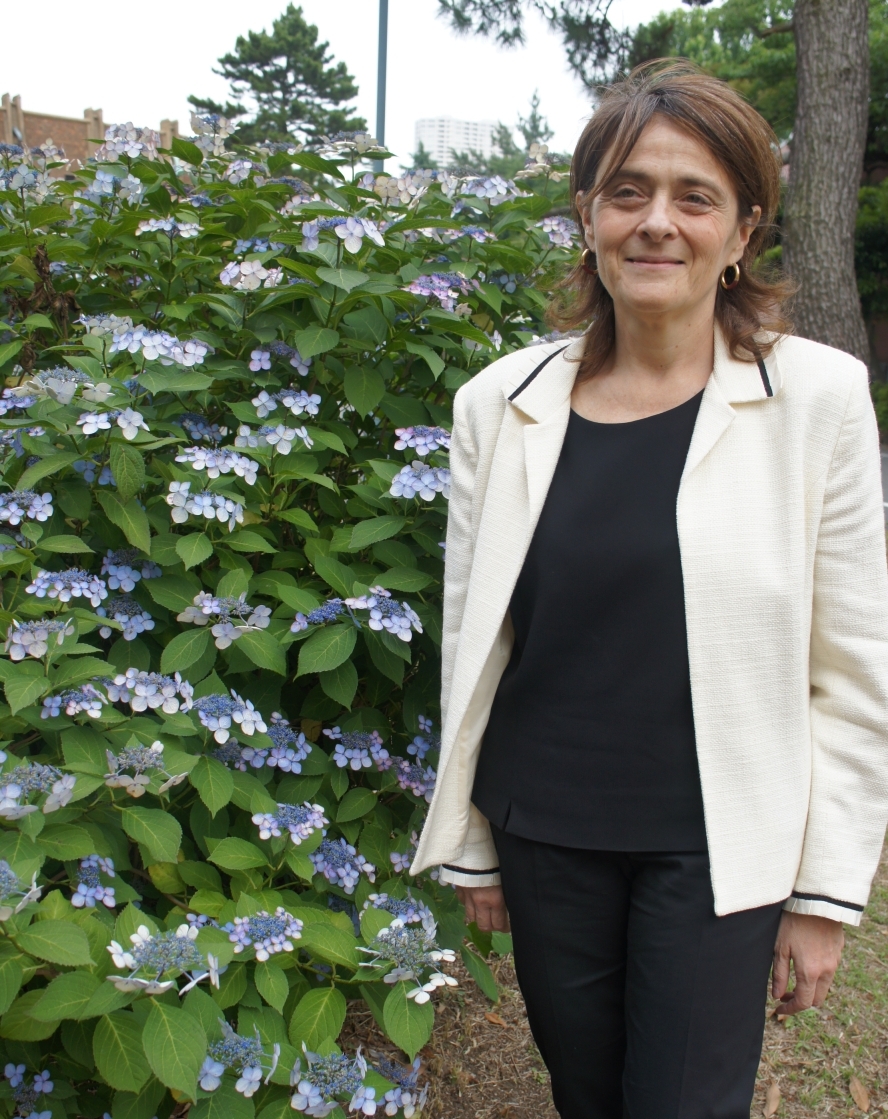 Professor Heissig shares her advice for those who aspire to research in Japan and opens up about her future plans.

I often get asked for advice on how to manage a career as an international researcher in Japan long-term. I have been incredibly lucky. I had an advantage at the beginning with a big publication list, and then I got into the Frontier Science program which gave me five years of freedom. This acted as a buffer which allowed me to establish myself at the Institute and find my niche as a scientist. I will venture towards a new niche soon.

In Japan, you can do good science. If you want to establish yourself as a scientist in this country, you should come at an early age, and with native language skills. When you graduate from college in your home country, you should come to Japan with the intention of setting up your career here. I think then that you would have enough time to network with peers in your field and compensate for lack of family support. For me it was essential that I had support from my husband. I think that age- and language-related issues can be overcome more readily if you come at an early time point in your career.

I plan to continue researching. I really enjoy the environment here at IMSUT. I also like my colleagues; they are open-minded scientists. I have learned to work with the Institute’s staff. Of course, there are language barriers, but we tried to work with each other, which is fantastic. That’s also why I feel like in this institute, I had found a niche. It took both sides — the people from the Institute and me — to find ways to overcome our different backgrounds and work together. I think we have done well. We got used to each other and can accept each other. I think they try to help me wherever they can, and my colleagues are open to support me. That’s why I love working as a researcher here. 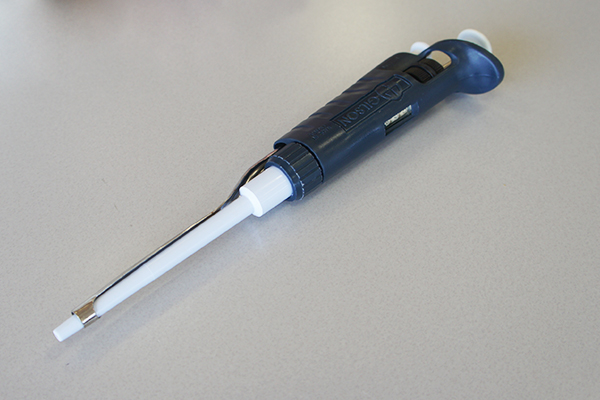 The Power of the Pipette

An enduring symbol of Professor Heissig’s career and ambition

Professor Heissig loves doing basic research, and one of the major tools for basic research in her field is the pipette. This pipette was a gift from her PI when she was researching in the United States. As a researcher, she was pipetting a lot, and got exciting results. In the end, this excitement made her change her career from medical doctor to basic scientist. The pipette also represents for her the hope that science can be done anywhere in the world. While conducting science in a foreign country may come with challenges, Professor Heissig says she believes in the power of science, as well as the ability for experiments to bring us closer to the truth and enhance our knowledge. After many years of running her own lab, she still loves doing experiments, and she still uses this pipette when doing them. 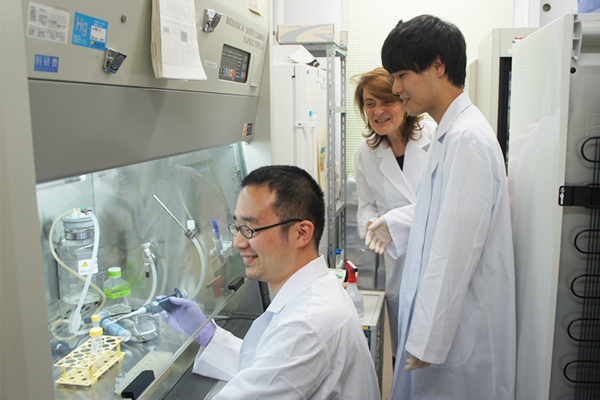 Realizing her dream of creating an international scientific platform

When Professor Heissig was researching in the US, she loved how her lab mates were from all around the world. She decided that she wanted to create a lab like that of her own someday. She established a lab at IMSUT and has been running it for several years. It is still rather small, with around four students and one post-doctoral fellow. Half of the students are international and half are Japanese. Professor Heissig is in her lab from morning to night nearly every day; she wants to know what is going on with her experiments, and she also comes in to look after her students. Here, she is watching two of her students as they conduct an experiment. With this lab, Professor Heissig is fulfilling her dream.