By improving kidney function, can "AIM" double cats’ lifespan?
— Thinking outside the box to develop a "wonder drug" —

Nearly 10 million cats are kept in Japan, and many of them die of kidney disease. Since discovering 20 years ago the "AIM" protein which is found in the blood, Professor Miyazaki has been devoted to the research of this particular protein. Over the course of his research, it became apparent that AIM improves kidney function. He is now working on developing medication that may substantially extend the lifespan of cats. 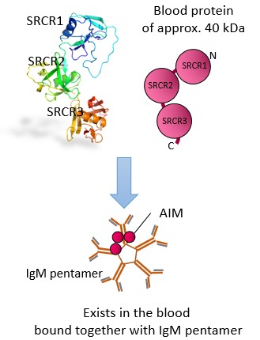 AIM is a blood protein of approximately 40 kDa, with three domains called SRCR which consist of large amounts of cysteine (a type of amino acid). Normally it is bound together with a large IgM (immunoglobulin M) pentamer in the blood, and it is not carried into the urine.

Professor Miyazaki, who graduated from the UTokyo Faculty of Medicine in 1986, was working at a hospital in Kodaira, Tokyo as a medical intern when he happened to pick up a specialist magazine. In it, there was an article about Professor Kenichi Yamamura of Kumamoto University, who was one of the first in Japan to create a transgenic and knockout (genetically modified) mouse. Seeing this, Miyazaki immediately thought, "I must go and study with this professor." Thereafter, he went to France and Switzerland to further deepen his research on immunology, and in Switzerland he discovered a new molecule at the renowned Basel Institute for Immunology. Upon verifying in vitro that this molecule has the function to impede the death of macrophages, a type of white blood cell, he himself named it AIM, which is an acronym for "apoptosis inhibitor of macrophage."

A chance exchange served as the key

AIM exists abundantly in blood and has a complex structure, with three domains in the shape of little balls connected to one another. It was during Miyazaki’s time as an associate professor at the University of Texas Southwestern Medical Center at Dallas that he ascertained its function inside the body. Until then, however much Miyazaki examined AIM in mice, nothing happened. He had been laboring away for six whole years with no data being produced, until one day he bumped into a man on university grounds and engaged in a conversation with him that nudged Miyazaki in the right direction. That man was Professor Joseph Goldstein, an authority on cholesterol metabolism and winner of the Nobel Prize in Physiology or Medicine in 1985 for his research in the field. Professor Goldstein’s words inspired Miyazaki to treat mice without AIM with a high-fat diet to fatten them up, by which he discovered that compared to fat mice with AIM, obesity and fatty liver were likely to worsen for those without the gene. "(Fattening the mice up) is something that wouldn’t even cross the mind of an immunology researcher, and I thought it sounded ridiculous. But I wasn’t finding anything otherwise, so I did it out of desperation. That led to the elucidation of the function of AIM." He says that at that time, he fully realized the need to tear down the walls separating academic disciplines in order to learn about illnesses.

"As someone who had been on the fast track to a successful career in immunology, I was so shocked when I learned that we cannot determine even one of the functions of a protein produced by cells of the immune system based on the knowledge of immunology alone." 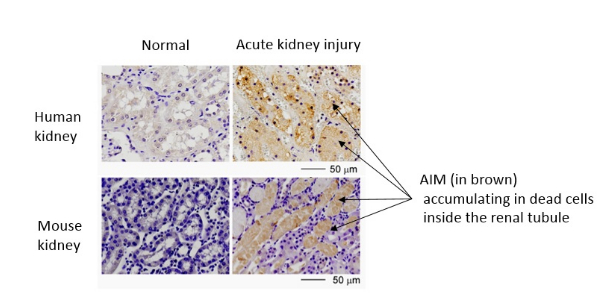 When the kidney is impaired (acute kidney injury), tubular epithelial cells die and peel off, blocking up the renal tubule. Kidney damage progresses unless the blockage has not improved, resulting in either death or chronic kidney failure. It can be seen that kidneys with acute kidney injury have an accumulation of AIM (brown) in the dead cells that are blocking up the renal tubule. 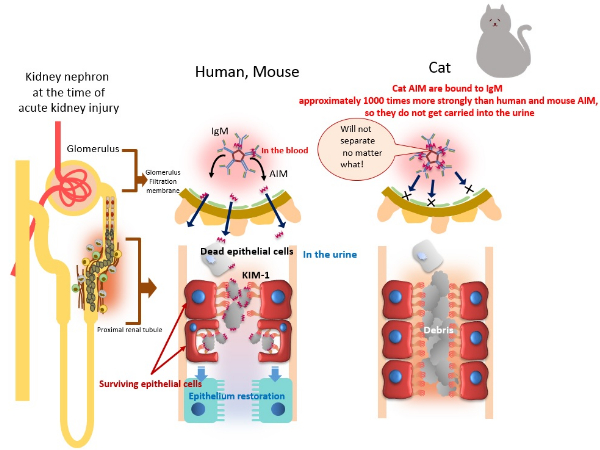 As seen in the diagram on the left, AIM that have dissociated from the pentamers move from blood to urine, and accumulate around the dead cells that block up the renal tubule in humans and mice at the time of kidney injury. This serves as a sign and the dead cells are ingested via phagocytosis and cleaned out by surviving epithelial cells. As a result, the blockage improves and the kidney recovers. Cat AIM, on the other hand, are so strongly bound to IgM that they do not dissociate, which makes them unable to be carried into the urine and therefore unable to accumulate around the dead cells. As a result, surviving epithelial cells cannot clean the dead cells, which means the blockage is untreated, and thus kidney function worsens.

Since returning to the University of Tokyo in 2006, Miyazaki shifted his research towards all kinds of illnesses with a focus on AIM, and has published a number of papers demonstrating how AIM responds to obesity, liver cancer, type 2 diabetes and chronic peritonitis. In 2016, his paper clarifying AIM’s involvement in cats’ kidney disease was published in Nature Medicine. Kidney disease is caused by dead cells piling up in the urinary tract that eventually block off the passageway, much like a clogged up drain pipe, leading to kidney damage. Miyazaki describes AIM as a sort of agent serving to unclog the pipe.

"When there is waste inside the body like dead cells, AIM goes to the problem area through the blood and flags exactly where the waste is. AIM itself does not dissolve problem cells; rather, other cells like macrophages come along to eat them." Around 2015, when Miyazaki went for a drink with a veterinarian friend, he spoke of the relationship between AIM and kidney disease, and his friend reacted with excitement. Most cats get kidney damage by the time they are five years old, and die around 15 due to kidney failure. The arrangement of amino acids in cats’ AIM is slightly different to that of humans, and it is genetically designed not to function, which is also a common trait in the AIM of other felines such as lions and tigers. Conversely, AIM in dogs and mice works fine, explains Miyazaki.

Thinking AIM could be used as a therapeutic treatment for cats, Miyazaki set up a start-up company in 2017 called L’Aimia. He is currently conducting research on mass-producing cultivated AIM produced by mammalian cells and refining it. He plans on starting clinical trials on cats in 2020, with the goal of commodifying the treatment by 2022.

Aside from administering the treatment as a preventative vaccine, it is expected to work on cats with declined kidney function as well, potentially increasing life expectancy from 15 years to 30 years according to Miyazaki. No side effects have been found. It is supposed that there might be a chance of antibody production making cats resistant to the drug, though such an issue has not been observed to date when tested in cats.

Using AIM to treat humans in the future

Miyazaki says he likes cats, but what drives him the most is his determination to meet the high expectations of cat owners. He also goes on to speak about a dear friend he lost during his medical intern days due to a terminal illness, and that she was a cat lover too.

"I believe that perhaps my friend is one of the reasons why I was destined to save cats – I wouldn’t have ever imagined myself focusing on cats otherwise. In reality, however, I have witnessed many people passing away due to incurable illnesses, so I feel strongly about eventually using AIM to treat people. That is the greatest motivation that is supporting my research right now." 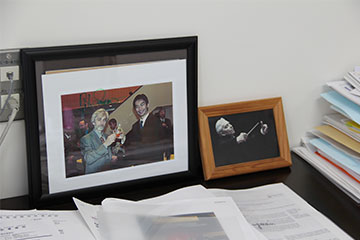 Miyazaki is a classical music aficionado and has learned the piano and conducting. In his lab, there are photographs of the conductor Herbert von Karajan as well as one of the world-renowned pianist Krystian Zimerman when he was invited to UTokyo to do a recital and a panel discussion. Miyazaki sometimes toyed with the idea of leaving medical school to go to a music college, or of making a phone call to Seiji Ozawa begging to become his pupil. "I think treating illnesses and conducting music have much in common. There must be something inside everyone like a key that conducts the whole body in beautiful, orderly harmony. I have a feeling that that something is AIM." 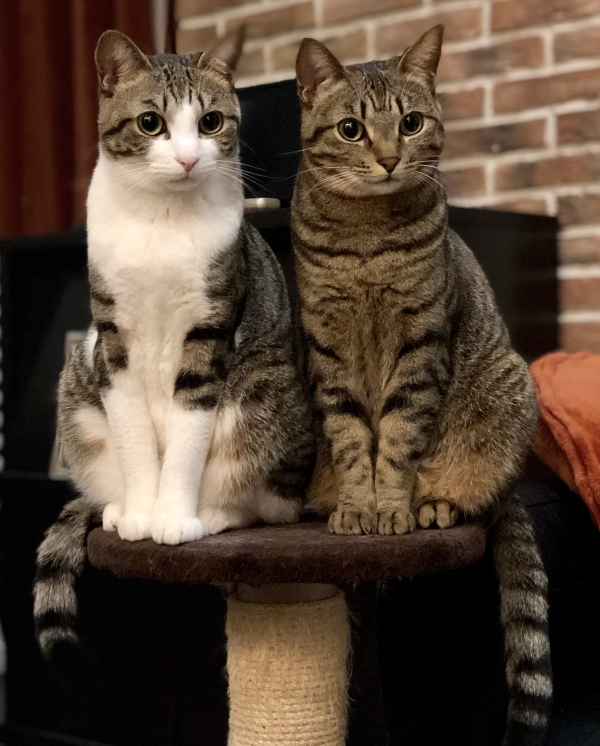 Life expectancies of cats are expected to increase if kidney disease, which is one of the leading causes of death in cats, can be treated.

AIM therefore is something that stops the death of macrophages.