Many living creatures appear in the works of this poet who trailblazed fresh horizons for modern poetry in Japan. One of his most vivid subjects was cats. A researcher on modern Japanese poetry invites us into a unique cat world that cannot be fully expressed using typical onomatopoeia. In graveyards, wetlands, the spirit world, the streets, or the night sky — where are the cats?

Where are the cats? Sakutaro Hagiwara (1886-1942) created his first free-verse collection Tsuki ni hoeru (Howling at the Moon) in 1917, in which we hear the echoing sound of a dog’s howl. His second anthology was published in 1923. In the poem titled Aoneko (The Blue Cat), which was also the title of the collection itself, he wrote:

According to Hagiwara, the "blue cat" in this passage includes nuances of the word "blue" in English which means "without hope," "melancholy" or "weary" and refers to a "despondent cat." The title of the collection, Aoneko, "likens the bluish-white spark of power cables reflected in the city sky to a large blue cat." But just what kind of pale spark was gleaming in the city’s night sky?

During and directly following the era of Aoneko, many cats appeared in Hagiwara’s poems, all in forms that are not from this world. The phantom floating on the sound of the green flute like a mirage "resembles a cat with no head" walking "unsteadily in the long grasses of the cemetery" (Midori-iro no Fue [Green Flute]). The corpse of a woman emitting a musky smell, with black hair fanned out on the floor on a spring night is a "single lonely blue cat" (Sekichiku to Aoneko [China Pink and the Blue Cat]). In the "lonely swampland where frogs gather," a spirit woman named Ula "shivers like a kitten" (Shotaku-chiho [Swampland]). Furthermore, the poem describing a rendezvous with a woman roaming about dragging her "garment of dense fog" in a cemetery that appeared swollen with soft moisture ends with the line, "Bury the mud cat’s corpse" (Neko no Shigai [The Corpse of a Cat]). 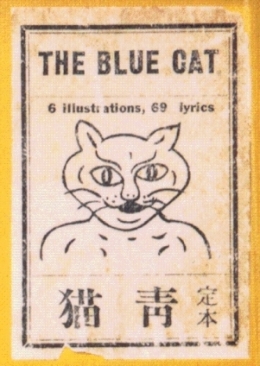 Sakutaro Hagiwara’s own illustration used for the slipcase for Teihon Aoneko (The Blue Cat: Definitive Edition) (first published by Hangaso in 1936).
Photo courtesy of Maebashi City Museum of Literature
http://www.maebashibungakukan.jp/

Always so captivating, heartrending and alluring, cats transform into dream women in graveyards who lure the poetic subject, and the narrator “I” roams in a dim-lit underworld in search of these formless cats. On the one hand, the woman’s name Ula (浦, meaning “inlet”) is remotely connected to the dead sweetheart named Ulalume in a poem by Edgar Allan Poe, but the image of the curved, coving landscape expressed by its kanji character is also associated with the uterus and a desire to return to the womb. Poe was not the only poet that provided inspiration for Hagiwara’s cat imagery. Rather, various cats fluttered around like shadow pictures from the turn of the century onwards, including the cats of Charles Baudelaire with their electric fur and mysterious gold-dust eyes, and the cats of Paul Verlaine that blend together with women, concealing sharp claws as they play. Against that background, Hagiwara introduced many cats with exquisite magic into the Japanese poems of the Taisho and Showa periods.

This is a poem from the Tsuki ni Hoeru collection which preceded the Aoneko anthology:

It is two “jet black” cats (makkuroke no neko) crying these lines. Then, in 1937, more than a decade after the publication of Aoneko, Hagiwara published Neko-machi (Cat Town) as a prose-poem style novella.

If anyone is interested in these cats, please read Neko-machi, or maybe look quietly up outside at night. You might just see the shadow of a large cat, shaped like a bluish-white spark gently encircling the city sky. 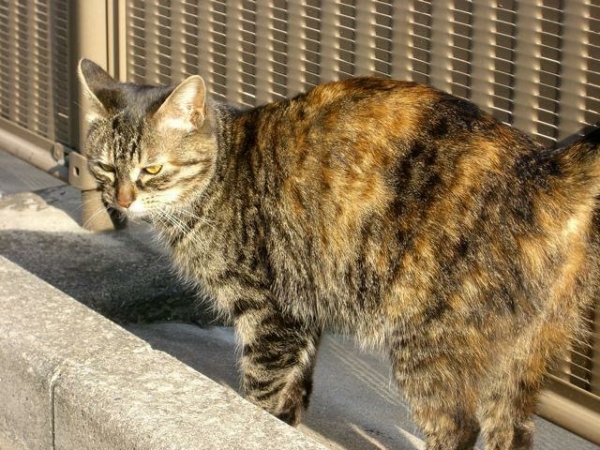 Miiya, a strong cat, left home one day and joined the strays living in the UTokyo neighborhood of Nezu.