Two virtuosos of Nihonga (modern Japanese painting), Shunso Hishida and Seiho Takeuchi, have left masterpieces featuring cats. Professor Masaaki Itakura, who researches the history of East Asian painting, explains how these works are modeled on pieces painted by an ancient Chinese emperor. Let’s trace the genealogy of the painted cat through time and space. 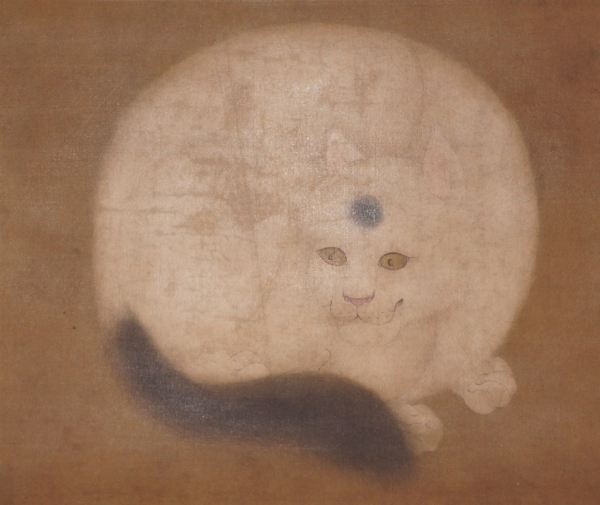 The Shoto Museum of Art in Shibuya, Tokyo held consecutive exhibitions about cats and dogs: the cat exhibition ran from April 5 through May 18, 2014, while the one about dogs was held from April 7 through May 24, 2015. The exhibits consisted primarily of modern Japanese artworks that reflected on the history of the creative depictions of both animals. Cats were presented not only from their practical aspects, but also as mystical, charming, beautiful, noble and cute creatures. Meanwhile, dogs were featured as the animals with the closest relationship to humans, touching on their loyalty to their owners, a trait leading to their familiar title of “man’s best friend.” However, a simple comparison of the number of visitors to each event reveals an overwhelming victory for the cat exhibition.

Among all the Chinese emperors, Emperor Huizong of Song (1082-1135; reign: 1100-1125) is the most famous cat lover. The eighth emperor of the Northern Song Dynasty, Huizong was known as a "langzi (prodigal son)" who indulged in the arts, extravagant pleasures, and Taoism. He is widely considered to be a flippant emperor with little interest in politics who brought the country to ruin. However, he was also a "fengliu-tianzi (refined Son of Heaven)", championing imperial court culture and supporting and guiding literary and cultural achievements under the Song Dynasty that governed not by force but by law and reason. There are multiple cat paintings that are thought to be original works by Huizong, including Cat, which is considered to be an exceptionally detailed piece of an original Huizong work handed down by the Mito branch of the Tokugawa clan. A depiction of a spotted cat fills the whole painting. The cat’s body is covered in fur drawn using short, thin white strokes that lend a solid, three-dimensional sense to the painting. At the same time, however, the near-round shape of the cat’s body also makes it appear flat. In this piece, we can appreciate the formative orientation to which Huizong aspired that can be seen as the sublation between decorative and realistic qualities, or, to put it in temporal terms, the sublation between the Tang and Song Dynasties.

Throughout the medieval era and early modern period in Japan, intaiga (imperial academy-style paintings) represented by Huizong’s painted cats had reigned supreme as important "classics," and artists remained familiar with these works even in the modern age with its more precise awareness of realistic sketching. Japan boasts modern works from masters representing each art world of Tokyo and Kyoto; that is, Kuroki Neko (Black Cat) (1910, Eisei Bunko Museum) by Shunso Hishida (1874-1911) and Hanbyo (Tabby Cat) (1924, Yamatane Museum of Art) by Seiho Takeuchi (1864-1942), both of which actually draw inspiration from Huizong’s cats as "canon."

The reconciliation of sketching and decoration that we see in Shunso Hishida’s Kuroki Neko masterpiece (drawn very late in his career) was clearly inspired by hints taken from Huizong’s cat sketches from the beginning. The earlier Shiroki Neko (White Cat) (1901, Shunso-kai [Shunso Hishida Association]) offers a vivid contrast between the carefully detailed painting of the cat and the quick, wide painting of the plum branch, so it is clear at a glance that this work was based on the collections previously possessed by the Mito branch of the Tokugawa clan. Hishida then made several attempts before perfecting his Kuroki Neko masterpiece. In addition, just before becoming a part-time teacher at the Tokyo Fine Arts School, Hishida delivered copies of Chinese paintings and other works to the school to use as teaching materials, and among these was a different Cat purportedly painted by Huizong. It is hard to say that this Cat directly reflects Huizong’s style of painting, but it must have been the Cat by Huizong that was well known during the Edo period. Furthermore, this was the very picture that Takeuchi had in his mind when he painted Hanbyo. One anecdote says that Takeuchi saw a cat that he encountered at a greengrocer shop in Numazu, Shizuoka Prefecture as "Emperor Huizong’s cat," so he swiftly gained possession of the cat, took it back to Kyoto and spent many days and nights observing and sketching it to create the finished Hanbyo work. In recent years, a photograph of the cat was found in the vast collection of Takeuchi-related photographic materials owned by the Umi-Mori Art Museum. Transferred from painting to reality, and then back to painting. The photograph was likely involved in this transposition from painting to reality and back again, making the issues surrounding painted cats overlap with those of modern art itself. 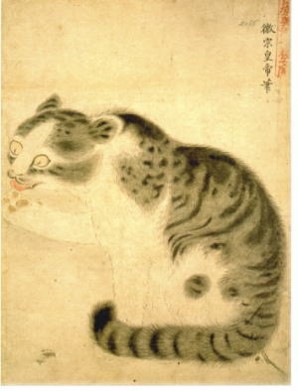 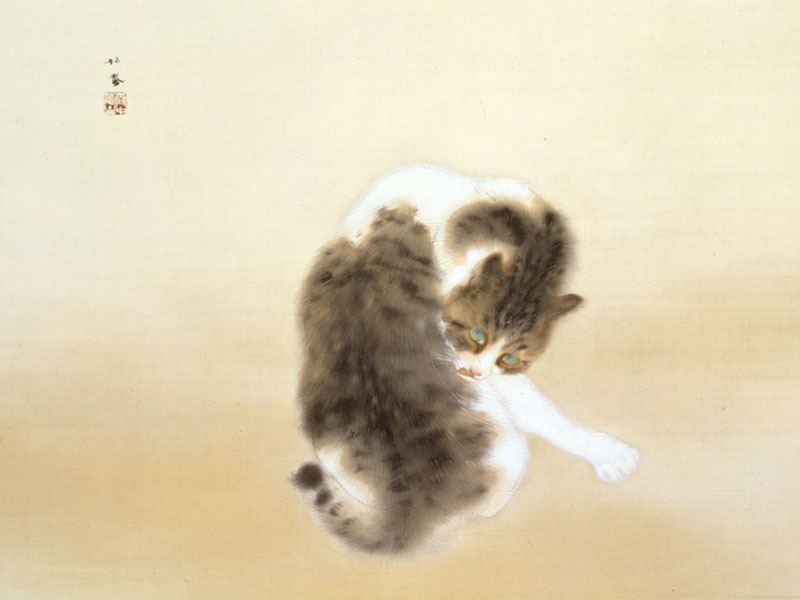 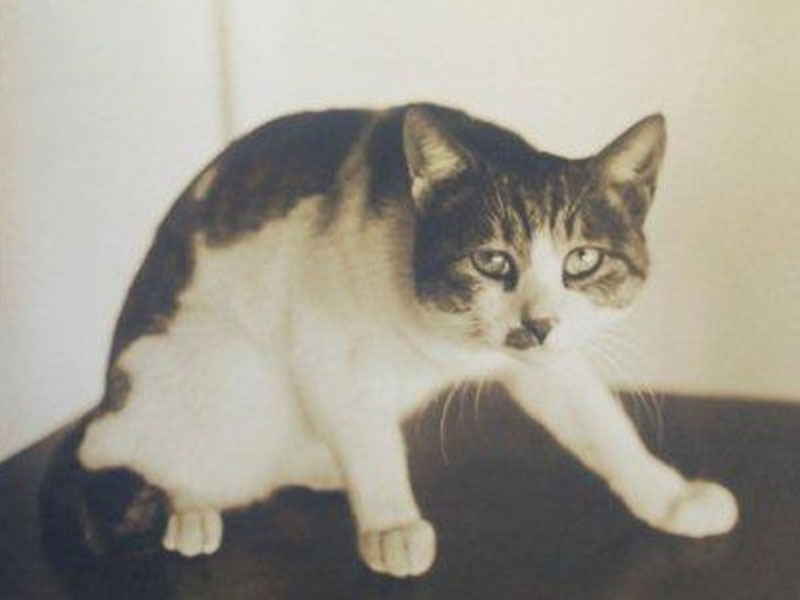