An expedition to the Kashiwa Open Campus 2018

The Kashiwa Open Campus was held over the course of two days on October 26th and 27th, 2018, where 15 departments organized over 170 displays and workshops across the entire Kashiwa Campus. Mr. T and Ms. A from the University PR Group dropped by to experience the event – read about some of their memorable moments and get a taste of Kashiwa yourself!

T: Let’s start with photo 1 – how cool are these stairs leading up to the library!?

T: Look closely. The junior staff of the library taped the arrow and letters “UTK,” which stands for the University of Tokyo Kashiwa, in the hope that people will pay a visit to them. They had set up an exhibition inside the library called “UTokyo Students’ Bookshelf” where they put their favorite books on display. There was a wide range, from scientific books like Sosuu Zemi no Nazo (The Mystery of the Seminar on Prime Numbers) by Jin Yoshimura and Zou no Jikan Nezumi no Jikan (Elephant’s Time, Mouse’s Time) by Tatsuo Motokawa, to philosophical books like Tetsugaku no Nazo (Mystery of Philosophy) by former UTokyo Professor Shigeki Noya, as well as Alain’s On Happiness. It was really interesting.

A: I really liked the stamp rally sheet they were handing out on the ground floor – they designed it like the Marauder’s Map in Harry Potter!

A: You are kidding me.

T: …. Moving on swiftly, 2 was a game where you searched for a different organism in a box full of dried young sardines. You got lower points for finding crabs and prawns, and higher points for phyllosoma larvae. Children were hooked on it.

A: What is 3? It looks like a fidget spinner.

T: This is the whirlpool created when spinning water inside a water tank. The shape changes from a circle to a triangle to a square depending on how quickly you spin it. It’s pretty amazing, isn’t it? 4 was a section where you could touch living creatures from near the beach. I stayed away from the sea cucumber myself but the boy in the photograph was loving it and handled the creatures like a pro.

T: This was an exhibition showing the growth stages of silkworm, from egg form to pupa. The number of times they shed their skin indicates their growth stage. 6 is Professor Shoji Oda – he specializes in medaka (a small Asian fish species common in rice paddies), and he was explaining to us about his research on their mating behavior. 7 is Professor Kaoru Saito and his “Sound Cocoon” – you can hear live sounds from different forests inside the capsule. It was rather therapeutic.

T: This is a piece by Ryuji Uchida – he’s doing his PhD under Professor Saito’s supervision, and is focusing on environmental education through manga. He actually won the 29th Kuroshio Manga Taisho award sponsored by the Kochi Shimbun newspaper. You can spot Professor Saito as well as other researchers in the drawing.

T: 9 is a deer skull. The details you see are the suture line – it’s a cool pattern, isn’t it?

A: Yes it’s rather artistic as far as skulls go. 11 is the wall of the Graduate School of Frontier Sciences’ Transdisciplinary Sciences building. It looks like an action/sci-fi film set, no?

T: I guess so… How about what they were doing inside, though?

A: Right. 10 was the soft material section, and I made a green slime by mixing laundry starch and sodium borate. It was so much fun – I hadn’t played with slimes since I was a kid! 12 is a keyboard that used a holographic mirror and ultrasound. It was as though I was touching the keys but I wasn’t… if that makes sense. It was a strange sensation.

A: 13 was a virtual reality section in the Information Technology Center – they gave me 3D glasses and I could see air currents flowing around two buildings. And of course, they had their supercomputer Oakforest-PACS which was crowned number one in the first ever IO-500 list for its storage performance.

T: 14 was a demonstration of emergency procedures in a lab. The fire took me by surprise, but we were clearly in safe hands.

A: 15 is the Institute for Solid State Physics (ISSP). That’s me attempting to draw a heart with laser – I think it turned out pretty well. 16 was another supercomputer – it was cold in the room to stop the computers from overheating. I thought I could go inside as he opened the door to what seemed like a booth… I was mistaken.

A: Look at 17 – they anthropomorphized minerals and created original trading cards out of them. All the characters came from different countries and had different powers, like Pokémon cards. They were doing a “crystal world cup” tournament. I ended up going around the whole of ISSP and completed their stamp rally – they gave me a Rubik’s Cube with their mascot Busseiken on it as a prize!

T: Busseiken was everywhere! Apparently it was the first time Kashiwani (next to CHI-BA+KUN) made an appearance too. They’re all so cute! 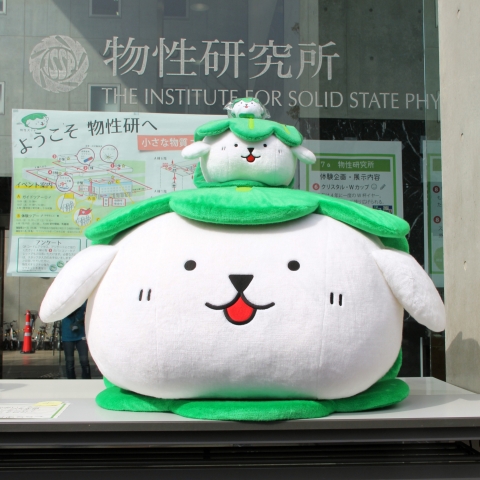 A: If you’re into that sort of thing… 18 is a Chinese student at the section where international students were introducing their hometown and sharing their culture. There were live performances of traditional music and dance as well, adding an international flavor to Kashiwa. I went on a Kavli IPMU building tour, too: 19 is the impressive Piazza Fujiwara. The architecture was so fascinating, and I liked that they used warm lighting, giving the whole space a mellow ambience. Optimal research environment indeed. In their library, they had attached special bars to the bookshelves that come out automatically if there’s an earthquake to keep the books from falling. Luckily they attached them right before the one on March 11, 2011. In 20, they were making soap bubbles using atomic models.

T: Speaking of Kavli IPMU, there was a special lecture on the multiverse by Principal Investigator Yasunori Nomura – it was very engaging despite its complexity.

T: 21 is a photo of 15-year-old girls tackling a memory test at the Institute of Gerontology – it reminded me of the game “Simon.” They had a resting area with refreshments too, which many elderly visitors were using. I thought that was very considerate – I wouldn’t expect any less from specialists in gerontology!

A: 22 is a cloud chamber that allows you to see the contrails of cosmic rays. They kindly explained all this to me in detail but it went right over my head. 23 was a model of the Kamioka mine area where the renowned Super-Kamiokande is. I have no idea why Winnie the Pooh was there.

T: 24 is the “nyu (milk) trino” flavored Super-Kamio “candy” they were selling outside the Institute for Cosmic Ray Research (ICRR) building. Clever play on words there. They had their notoriously tricky Super-Kamiokande jigsaw puzzles too, including their new and improved 500-piece edition. I tried tackling it but gave up after five minutes.

T: 25 is the Kaikaku Forum, the sister publication to Gakunai Koho (internal university magazine). I’ve been in charge of the Gakunai Koho for sisx years now and I never knew about this, so it was a shock to me. 26 was an exhibition of simulations of people’s activities and traffic movements at different times of the day. It made me feel a bit godlike. 27 is Mr. Bojia Chen from Shibasaki and Sekimoto lab, who explained the GPS stamp rally to me. His favorite anime is Grand Blue.

A: Thank you for that lovely piece of information. 28 is a self-driving bus. It was very impressive – it can park up precisely 5cm away from the curb. The steering wheel and the outside view was displayed on a monitor inside the bus. It’s the future!

T: 29 is “Chocolate Science,” which was an intimate program aimed at high school girls where ISSP Director Hatsumi Mori made an appearance. It involved chocolate-making and seeing how different molecular structures of chocolate affected the taste and texture. I could see some of the girls’ eyes light up with their newfound interest in physics – this was so lovely to see. Last but not least, 30 is Gorokuro thanking people for coming and handing out his business cards at the bus stop as people were leaving the campus.

A: But why is he dressed as a kappa…?

T: It’s the official mascot of the Kashiwa Campus! Duh! 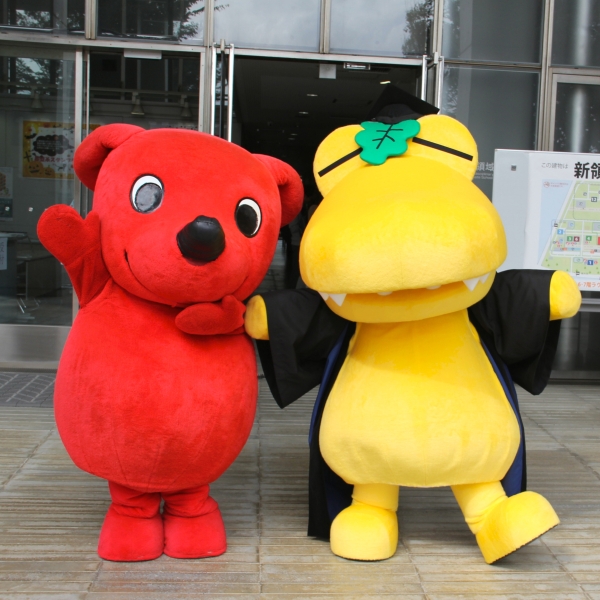 Note: This article is based on a feature in Gakunai Koho no. 1516, November 2018 (Japanese language only).