From an early age, he pondered the meaning of life, and sought to reveal the truths of nature. While he was interested in using philosophy and religion to explore these topics, he admired the practicality of science, and chose to tackle these questions by studying physics. After gaining an education in physics as an undergraduate at Chulalongkorn University in his hometown of Bangkok, Thailand, Pholsen narrowed his focus to photonics, the study of light. Now a master’s degree student at UTokyo’s Graduate School of Engineering and researching in this field at the Institute of Industrial Science (IIS), his objective remains broad, although he admits that he has tempered his expectations a bit. “I think that the goal of understanding everything may be too much for me,” he says, laughing. 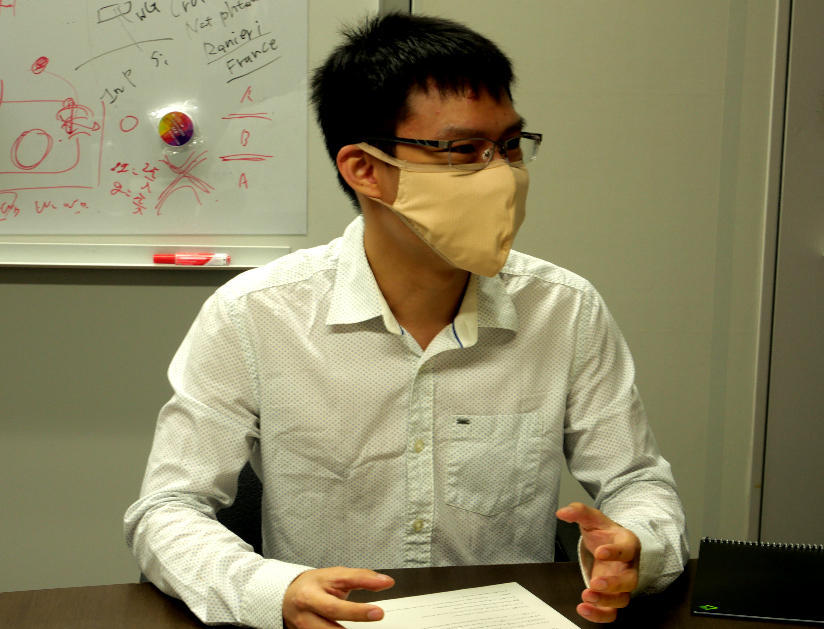 During his time as an undergraduate, Pholsen’s peers often talked about studying abroad, an idea which piqued his interest. He sought to continue on to graduate studies, and he felt that it would be good to experience researching in another country. Among the numerous study abroad scholarships, one in particular stood out to him: Japan’s MEXT (Ministry of Education, Culture, Sports, Science and Technology) scholarship. Pholsen recalls this scholarship as being the “most generous” of the ones he was considering, and cites that as his main reason for choosing Japan as his study abroad destination. Also, many of Pholsen’s older peers had studied in Japan through MEXT and recommended it, bolstering his decision to apply. “This scholarship is actually very famous in Thailand,” he adds.

Needing a supervisor to study under for his scholarship application, Pholsen searched for professors in Japan listed in photonics research papers. He came across the name of Satoshi Iwamoto, a professor at UTokyo’s Institute of Industrial Science, and decided to contact him. When interviewing with Iwamoto, Pholsen found that he got along well with the professor, which he believes is an important factor in choosing a supervisor. “With graduate studies, we depend a lot on our supervisors,” he explains. “So I tried to find one who I could match with.” Pholsen listed Iwamoto as his first choice for a supervisor on the application. A few months later, he received the fortunate news that he had been accepted. After also taking and passing an entrance exam for the Graduate School of Engineering, in which he would be enrolled alongside the IIS, he began preparations to come to UTokyo in October 2019.

Once Pholsen arrived in Japan, staff, including those from the Office of International Students, helped him with nearly everything, from finding housing (Komaba International Lodge) to opening a bank account. Thanks to them, the process of settling in was nearly “automatic” and “very convenient,” he recalls.

Time to think, learn and grow

From April 2020, Pholsen would officially be enrolled in a master’s degree program, but until then, he was classified as a “research student,” a type of student that can study and attend classes but does not receive any credits or a degree. “Being a research student is a good preparation period, because you can stop a bit and think about what you are doing,” Pholsen says. “If you suddenly start the master’s course instead, then you would be busy learning many subjects and also learning new laboratory processes.” He used this time wisely, taking introductory Japanese language courses on the Komaba Campus and self-studying fundamental subjects essential to his future research.

Having this extra time also allowed him to get to know his lab mates. “Without this period, I would be busy and maybe wouldn’t come to the lab that often, so I wouldn’t be so familiar with other lab members,” he says. “Especially because it’s my first time in Japan, it was good that I could have some time with them. I also got a lot of help from them.” Pholsen’s lab, Iwamoto Laboratory, has around 10 student members, along with Professor Iwamoto and a handful of researchers. Half of his fellow students are Japanese, and the rest are international students from China and South Korea. Pholsen has spent a lot of time with his lab mates, regularly having parties and eating lunch together (before the coronavirus pandemic). 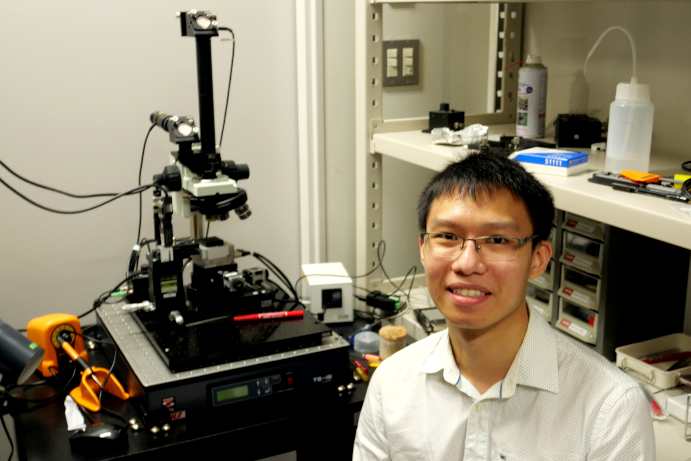 Pholsen with a transfer printing machine, one of the tools he uses to make photonic circuits in his lab.

For his first semester as a master’s degree student, Pholsen is taking five main classes, in addition to his lab’s seminar and Japanese language courses. His classes are mainly about photonics.

Photonics is an expansive field, covering lasers, sensors, cameras and telecommunications. Pholsen’s research is on manipulating light with nanostructures built within semiconductors in an effort to make smaller circuits, specifically photonic circuits, that could be used in powering a wide range of devices. The ability to control the behavior of a single photon of light in this manner has a number of potential applications, including the creation of quantum computers and enhanced high-security encryption.

To conduct his research, Pholsen first creates the design of a nanostructure, which is a tiny construction within a semiconductor, and then runs computer simulations of how photons (light particles) are produced when shining a laser onto the nanostructure. If the results of the simulation look promising, he has the nanostructure fabricated and carries out the experiment in real life. The goal is consistency – generating the same single photon each time the nanostructure is hit with a laser beam. Getting a constant result means that the structure could be reliably used in computing or communications equipment.

There are others in the photonics field who have successfully created nanostructures like this. However, many of these existing designs are difficult to utilize in photonic circuits, so Pholsen and a team in his laboratory want to expand on this research. In particular, they are looking to refine a method of integrating nanostructures into photonic circuits called transfer printing. “To make it easier to incorporate into the circuit, I try to adjust the design and step it up a bit,” he says.

Pholsen’s student life has changed greatly due to the coronavirus pandemic. His classes are all online, and he has to apply in advance to come to campus. He still likes working from his lab’s office, however, and does so two or three times a week since campus entry restrictions have been eased. “It’s easier to work at the office than at home,” he explains. “It’s more convenient, and I feel more motivated in the office.” Also, he gets to see and talk with some of his lab mates when he is there: “It helps. Being in the same place where we can have discussions and collaborate is engaging, and also productive,” he says.

Although he has just started on his degree, Pholsen’s plan is to keep researching for the long term. Feeling that a master’s degree is “too short to make an impact” in photonics, he hopes to earn a doctoral degree in the field as well. After that, he wants to continue on as a postdoctoral researcher, professor or even as a member of the research department of a company. One thing is for sure – as someone with the ambition to eventually understand everything and the support of those around him, a light will shine on whichever path Pholsen takes. 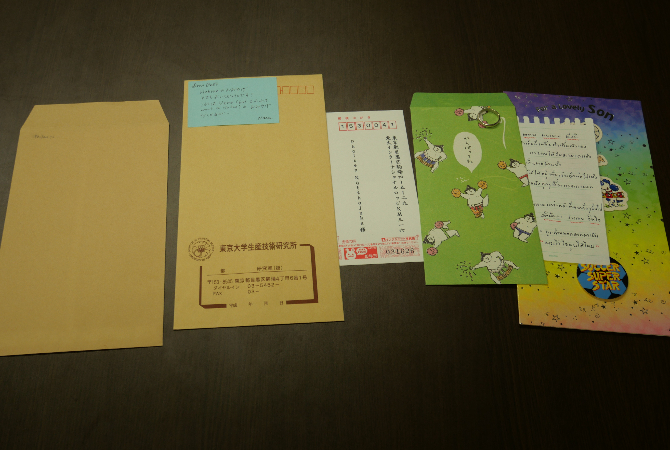 Reminders of support from friends and family

Pholsen keeps close to him simple messages and gifts he has received over the years from friends and loved ones. On the left are two envelopes that once contained small snacks, one from a staff member at the Department of Electrical Engineering office and the other from the secretary of Pholsen’s laboratory at the IIS. In the middle is a New Year’s card from a member of his lab. The envelope decorated with sumo wrestlers held a gift from his cousin, and resting on top is a ring from his girlfriend, which he usually wears. To the right are two messages from his father – the note is from shortly before Pholsen came to Japan, and the card is from when Pholsen was 10 years old. Pholsen says that looking at these reminders of love and support makes him happy. 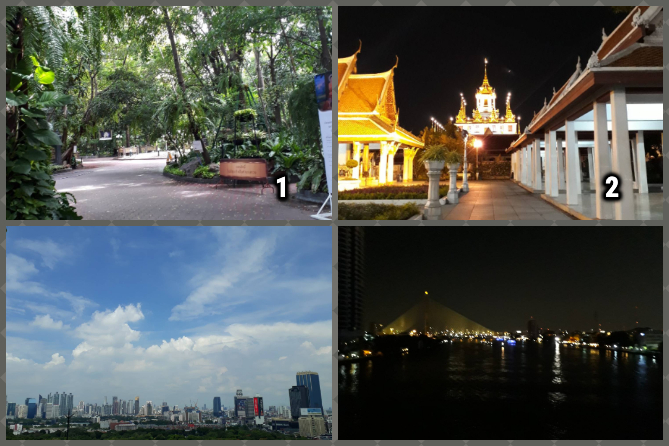 A city that never sleeps

Pholsen describes his hometown, Bangkok, as a city where you “will not get bored.” From lush gardens like the one around Wat Pathum Wanaram temple (1) to historical buildings such as the Royal Pavilion Mahajetsadabadin and Loha Prasat temple (2), the city has a seemingly endless number of thought-provoking and awe-inspiring places to experience. Pholsen assures prospective visitors to Bangkok of one thing: “Daytime or nighttime, you’ll have something to do.”