What is going on in the brain when people listen to music? How do they decode the sounds and hear subtle nuances in music? As a teenager, Florian Occelli spent time pondering such questions, eventually drawing him into the world of auditory neuroscience, a field of research into how brains and nervous systems respond to sounds. Currently a postdoctoral fellow at the International Research Center for Neurointelligence (IRCN), Occelli studies the influence that one’s early life environment has in shaping the development of that person’s sensory system for the sense of hearing. 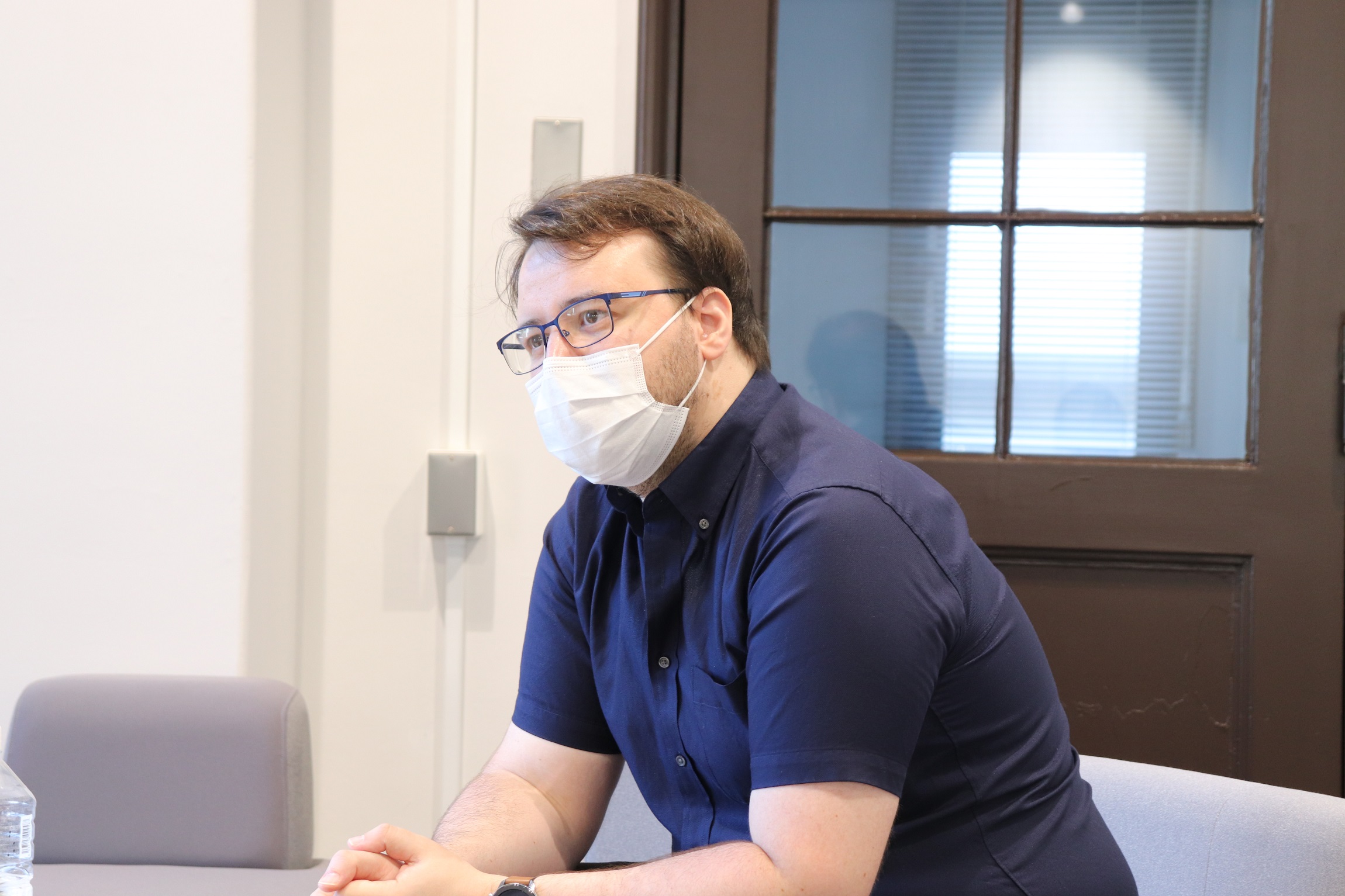 The sound of birds chirping wafted from one of the rooms in an IRCN laboratory one weekday morning. Occelli explained that there were roughly 80 songbirds inside the room and each species has its own distinctive song. Such songs can even differ slightly among groups within the same species, he said.

Since joining IRCN in 2018, Occelli has been studying the development of the sensory system for hearing, known as the auditory system, in the early life of songbirds and mice. In the research with the songbirds, Occelli and his fellow researchers study their song-learning process, such as how they detect and learn their group’s song from a number of different songs they hear, and the mechanisms of neurons, the cells of the nervous system, involved in the process. In the research on mice, he is studying how the acoustic environment they are exposed to when they are young impacts their ability to hear later on in life.

“One of the aims of the research for me is to understand the beauty of nature, especially plastic phenomena in the auditory area of the brain,” Occelli said, referring to the brain’s ability, called plasticity, to reshape its neuronal networks to function more efficiently during the learning process. “How can we learn so much? How can those species learn so much and communicate acoustically? These things are just fascinating to me.”

Hailing from Cannes, France, Occelli’s interest in the auditory system stems from his childhood environment in which he grew up surrounded by music. His father was a professional musician and there was always music and instruments in his house. Occelli, who is now an amateur jazz drummer, also learned to play several instruments as a child, including the piano and violin.

Such an environment growing up made him wonder about “the magic” of what is going on in the brain when he listens to music. His curiosity eventually led him to develop an interest in auditory neuroscience.

Later, Occelli studied neurobiology and neurosciences as a master’s degree student at Paris-Sud University (now Paris-Saclay University). There, he was struck by a lecture on plasticity phenomena in the auditory system by Jean-Marc Edeline, a research director at CNRS, the French National Centre for Scientific Research, and he decided to embark on research in the area.

“I found it fascinating the way neural networks change a lot in the brain during the learning process. I found that extremely, extremely fascinating,” Occelli said. After working as a postdoctoral researcher in Edeline’s laboratory at Paris-Saclay University, mainly focusing on the aging of the auditory system in a noisy environment, he contacted Professor Takao Hensch, a leading neuroscience researcher, hoping to work with him as his next step. Hensch, who is the director of IRCN and also professor at Harvard University, interviewed Occelli in Florence, Italy, while attending a symposium there, and Occelli was offered a fellowship position at IRCN.

Occelli joined IRCN in 2018 as a postdoctoral fellow, and now divides his time between the Hensch Lab, where he works with mice, and Project Associate Professor Yoko Yazaki-Sugiyama’s laboratory, where researchers are working with songbirds. The two labs, Occelli explains, have essentially fused together and now function as a single lab.

“I am extremely lucky to work here and learn two ways of seeing the development and plasticity of the brain in early life,” Occelli said, adding that he hopes one day his research will contribute to the elucidation of plasticity phenomena in the auditory part of the brain, and help to understand speech disorders such as dyslexia.

Impact of the pandemic

Occelli’s research, however, has been greatly affected by the COVID-19 pandemic. His labs were shut down for two months, in April and May 2020, during which time he was stuck at home.

“It’s been bad,” Occelli said. “With the shutdown, I was unable to do experiments for weeks. I stayed home and I was not seeing people and that was very painful.”

Although the lab is now open, things are far from what they used to be before the global outbreak of the coronavirus. Ordering materials necessary for his research from abroad is now one of the biggest challenges as it takes a tremendous amount of time for them to arrive. The pandemic also made it difficult to collaborate with researchers outside Japan as many of their laboratories are still completely or partially closed. “Nowadays, you don’t do science alone, by yourself. You need to collaborate with people (on the) outside. And that is difficult now,” he said.

Under the strict rules of his lab, Occelli is taking utmost precautions not to catch and spread the coronavirus, such as by wearing a mask at all times and making sure no more than two people are in the room at one time.

“Even with these precautions, there is no such thing as 100% guaranteed safety. But we should do the best we can,” he said. “As a biologist, I would feel terrible if I did something stupid that would contribute to the spread of the virus.”

Falling in love with Japan

It has been two years since Occelli set foot in Japan for the first time, and he is loving the life in Tokyo, calling the metropolis his home.

“I fell in love with Japan,” Occelli said. “It’s very difficult to explain, but I feel so good being here. And it feels like I’m at home. I never felt that when I was in Paris.”

Japan had always been the country he wanted to visit. When he was in France, he liked the works of Japanese film director Akira Kurosawa and Japanese animations and manga such as One Piece. He started karate when he was a small child and continued practicing the martial art until he entered university. But the country he saw and experienced firsthand, Occelli says, far exceeded his expectations.

“When you come from Europe, everything is different and everything is exciting – from the food culture to the way people interact and the fantastic train systems,” Occelli said.

As an art lover, Occelli likes to spend weekends visiting art museums to look at paintings, or listening to good music at jazz clubs. Although he hasn’t been able to do these things for a while now due to the pandemic, he says simply taking strolls along the streets of Tokyo makes him feel good.

His original plan was to return to France at the end of his three-year postdoctoral fellowship, but Occelli now hopes to extend his stay in Japan. On the research front, he says he plans to continue his work on the auditory system, and focus more on aging given that many countries, especially Japan, are facing rapidly graying populations.

“Currently I’m working mostly on the early stage of life, but I would like to do research on all the changes you see (throughout life) — from the auditory system during the developmental period as well as the changes that come with aging,” he said. 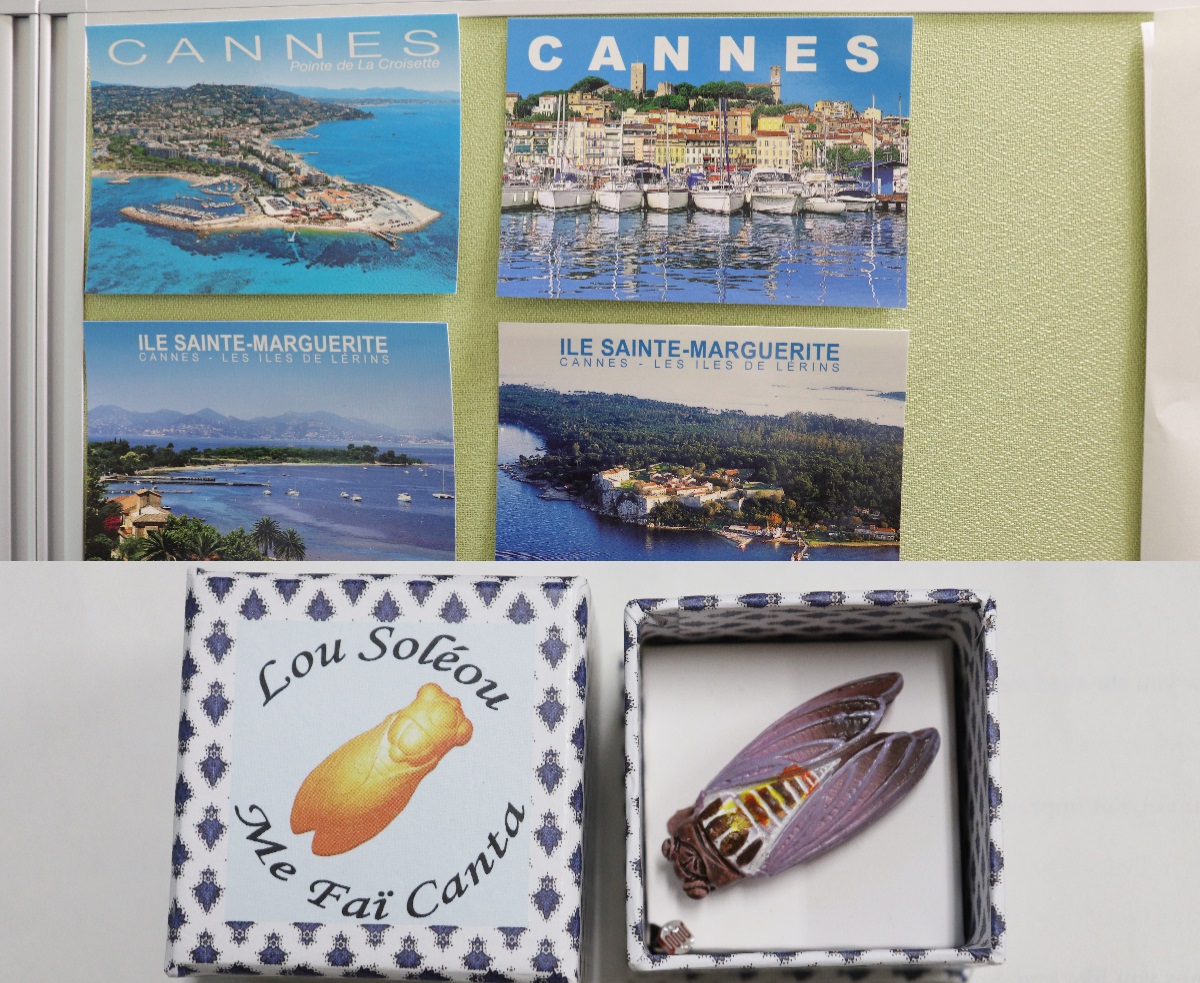 Occelli’s hometown, Cannes, is a resort town renowned for the star-studded, annual Cannes Film Festival. Located on the southeast coast of France, close to Italy, the city has beautiful islands. One of the islands, Ile Saint-Honorat, has been home to communities of monks since A.D. 410 and they make a very good wine, Occelli says. In his office at UTokyo, Occelli decorated a screen wall behind his computers with postcards of Cannes, so he can look at them whenever he misses his hometown. He also treasures a cicada figurine he got from his sister before coming to Japan. Placed in a little box, the figurine makes the shrilling sound of cicadas in France which, Occelli says, is different from the sound of cicadas in Japan. 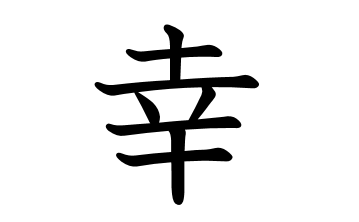 Shiawase (happiness) is Occelli’s favorite kanji and one of the first Japanese words he learned. “It’s simple yet elegant, and it has a nice meaning,” he explained. The shape of the kanji also reminds him of the sails on a boat, which makes him like the kanji more as boats are part of everyday scenery in his hometown.