The Komaba I Campus is introduced here in a photographic tour centering on buildings from the former First Higher School era. 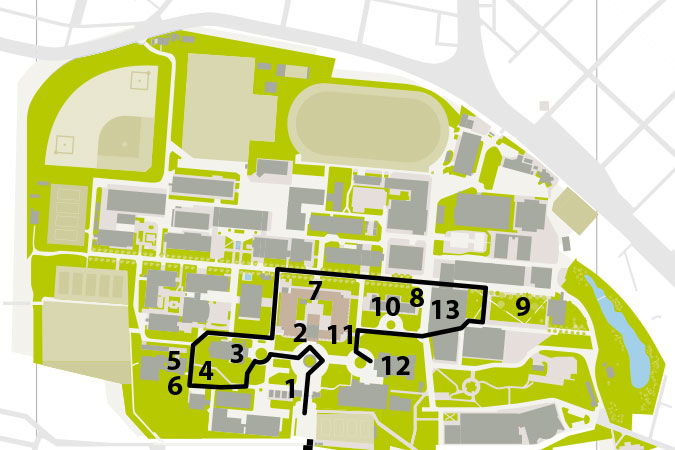 Upon leaving the west exit of Keio Inokashira Line Komaba-todaimae Station and descending the stairs on the north side, the Komaba I Campus Main Gate comes into view (Photo 1-1). The gate, which today is inscribed with “The University of Tokyo College of Arts and Sciences,” once bore the name plate of the First Higher School. Made of two large and two small doors, the gate is still adorned with the First Higher School insignia, with its oak and olive leaf design (Photo 1-2). The current main gate was rebuilt in 2008.

Going straight through the Main Gate takes you directly to the front of Building 1 (Photo 2). This was the main building in the First Higher School era, where classrooms as well as faculty and staff rooms and the principal’s office were located. Atop this building on the southwest corner are still to be found a triangulation marker and “public control point No. 2” of Meguro ward, thought to be from the time the building was constructed (they are no longer in use).

To the left from the front of Building 1 is a church-like hall, the Lecture Theater, which can accommodate around 500 people (Photo 3-1). It was built in the First Higher School era as an ethics hall. The round insignia atop the front of this building features a cross pattern in the center, with a four oak leaves design (Photo 3-2). This forms a pair with the design on the Komaba Museum (former First Higher School Library), located across the way to the right of the Main Gate and Building 1, which features a cross pattern with four olive leaves.

Nestled in the bamboo thicket to the west on the left side of the Lecture Theater is the Komaba Agriculture Monument (Photo 4). An agriculture school was established in 1878 in Komaba, Meguro ward. Later this became the Komaba School of Agriculture, then the Faculty of Agriculture of Tokyo Imperial University. In 1935, a land exchange was made with the First Higher School, which at the time was located on the current Hongo and Yayoi Campuses. The monument was placed in 1936.

The elegant building to the west of the Komaba Agriculture Monument, which today houses a French restaurant, is said to have been the First Higher School Alumni Association Building (Photo 5).

To the east of the bronze busts is an olive tree planted by the alumni association, also for the 130-year commemoration. On the far east side, near the garden entrance, the “Ah-gyokuhai” (“Oh, Jade Cup”) Monument has been erected, celebrating the school song (Photo 6-2).

7. Relief of Emblem on “Gokokuki” on north wall of Building 1

Walking from the Faculty House along the path on the north side of the Lecture Theater and heading north on the road west of Building 1 takes you to a row of ginkgo trees (Photo 7-1). This road was a main thoroughfare connecting the east and west parts of the campus at the time the Komaba School of Agriculture was established. Looking to the west, you can see an arch serving as the entrance way to an inner garden, behind Building 1. At the top of the arch is a bronze relief. This is the same as the school insignia embroidered on the center of the First Higher School Flag, “Gokokuki” (Photos 7-2, 7-3).

8. Former site of the Faculty of Agriculture weighing instrument on the eastern edge of the row of ginkgo trees

Going further east along the row of ginkgo trees takes you to an intersection with the road that borders the Communications Plaza. At the southwest corner of this intersection, the former site of the Faculty of Agriculture weighing instrument can be seen on the ground (Photo 8). Today the instrument is no longer there, with only the lid portion remaining.

Proceeding further east beyond the eastern edge of the ginkgo trees, you arrive at the inner garden of the Communications Plaza. In this area, student residence halls were built in the First Higher School era. The inner garden has underground lighting indicating the remains of the pillars of the residence hall Churyo (“central hall”) (Photo 9-1). Also, part of a wall has been relocated to near the Multi-purpose Hall. This wall was from one of the entrances to the underground passageways that connected the residence halls to other campus facilities (Photo 9-2).

Going along the road parallel to the row of ginkgo trees, from the west side of the south building of the Communications Plaza, you can see an old two-story concrete building on the right, Building 101 (Photo 10). This was built in the First Higher School era as a kind of prep school, where international students studied before entering the former higher school.

11. Olive tree given by Saito Agu at southeast corner of Building 1

Going past Building 101 and turning left on the road along Building 1 on the east side and proceeding south, you will find a single olive tree, planted on the southeast corner of Building 1 (Photo 11). This tree was brought back from Europe by Professor Saito Agu of the First Higher School. Next to the tree is a stone monument inscribed with Kanran (Olive) by Saito. There is also an explanatory signboard created by the First Higher School alumni association.

Going east from the olive tree, you will come upon the Komaba Museum, a building similar in shape to the Lecture Theater (Photos 12-1, 12-2). Used as a library in the First Higher School era, this building was refurbished in 2003, after which it became the Komaba Museum, a facility introducing various kinds of research and educational activities taking place in the University. Exhibits are open to the general public with no admission fees charged.