Tweet
As seen in Natsume Soseki’s I Am a Cat

The political science behind “skin” color

When you think of UTokyo and a literary work on cats, Natsume Soseki’s novel I Am a Cat springs to mind. Professor Komori, the leading scholar on Soseki, analyzes the history of humankind from the First Sino-Japanese War, Russo-Japanese War, and the Yellow Peril to imperialism, drawing on the relationship between the cats’ names and fur colors that appear in the book. Does the cats’ fur symbolize different races? Read on to find out. 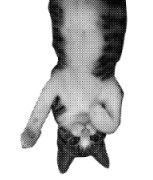 Natsume Soseki’s (real name: Natsume Kinnosuke; 1867-1916) first novel opens with “I am a cat. As yet I have no name” (quotes from this article are from Aiko Ito and Graeme Wilson’s translation published by Tuttle Publishing, 2001), and the first chapter ends with the line: “No one has yet named me but, since it’s no use crying for the moon, I have resolved to remain for the rest of my life a nameless cat in the house of this teacher.” The protagonist was once abandoned to be picked up again, getting taken in to the home of a middle school English teacher. However, it remains nameless – “no one has named me yet” emphasizes this.

All the cats have names except for “I” 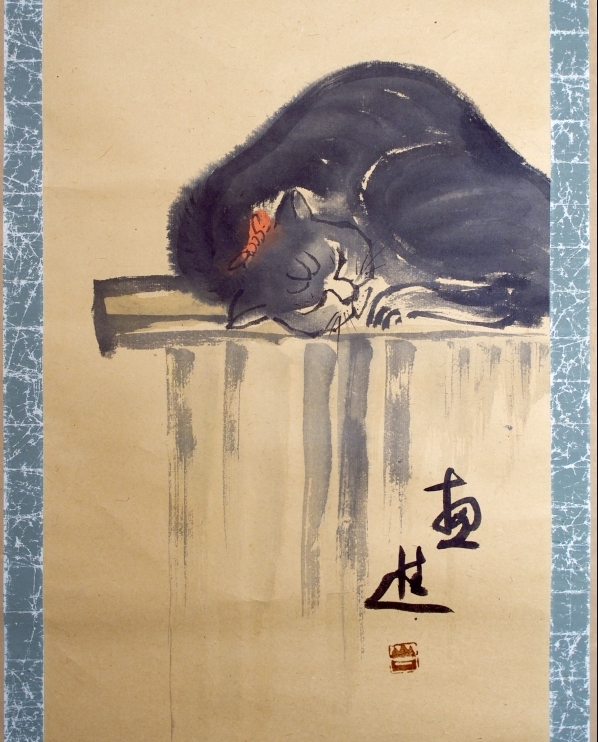 Indeed, the other cats that appear have “names.” After “I” used the first two opening lines to introduce himself, “Rickshaw Blacky” uttered: “You… a cat? Well, I’m damned” with “great vehemence.” “Miss Blanche, the white cat,” whose “four beautiful kittens” that she just “gave birth to” got “tossed [away] into the backyard pond” by a “shosei” (student), is the cat that “lives in the house of a military man.” Finally, the “three-colored tomcat living next door,” whose “master is a lawyer,” is “especially indignant that human beings do not understand the nature of proprietary rights.”

“The sun of earliest afternoon was pouring its most brilliant rays upon him, and it seemed as if invisible flames were blazing out from his glossy fur,” is a quote describing “Richshaw Blacky,” a “pure black cat.” Thus, while the cats certainly do have names, as the quote suggests, their “names” are not necessarily special names based on their characteristics, but rather the color of their fur only.

Based on this, it could be surmised that one of the reasons why the “master” does not give the protagonist a “name” is due to the color of the protagonist’s “skin.” This is because his “skin” is “like that of a Persian, [and] bears tortoiseshell markings on a ground of a yellowish pale grey.” It is too complex to turn it into a cat’s “name.”

However, what is more important is that the protagonist’s fur color closely resembles that of his master’s skin. His master, Mr. Sneaze, has “a weak stomach and his skin is of a pale yellowish color,” later going on to reveal (vol. 3, ch. 2) that the “pockmarks” that “scattered” “his face” were due to a failed smallpox vaccination (mirroring Soseki’s own image). It is apparent that the protagonist’s “skin” that “bears tortoiseshell markings on a ground of a yellowish pale grey” corresponds to his master’s.

If you were to consider the protagonist as a counterpart of his owner, then “Blacky” is the “rickshaw-owner,” “Miss Blanche” is the “military man” and the “three-colored tomcat” is the “lawyer.” It can thus be understood that these were newly created occupations in the so-called Empire of Japan, which aimed to realize the ideals of “civilization and enlightenment,” “enriching the country, strengthening the military,” and going “out of Asia and into Europe” following the Meiji Restoration. And of course, the protagonist’s master is a middle school English teacher, another profession that was established during the Meiji period.

Regarding the human beings who do not understand “proprietary rights,” “the cat-race” was considering “[engaging] in total war upon all humans.” In January 1905, I Am a Cat was presented as a one-time read in the haiku magazine Hototogisu. It was the second New Year since the Russo-Japanese War broke out, when the Empire of Japan was celebrating the news of victory following the surrender of Port Arthur on January 1st. However, the Siege of Port Arthur which was initiated under the command of General Nogi Maresuke on August 21st, 1904 had resulted in huge losses; of the 130,000 Japanese troops that went to battle, there were 59,000 casualties.

During the First Sino-Japanese War, however, it only took one day for the Japanese soldiers to occupy the coastal city of Port Arthur which was said to be the best port in East Asia at the time. In Natsume Soseki’s first newspaper-serialized novel Gubijinso (The Poppy) (June 23rd – October 29th, 1907), Mr. Kono, whose diplomat father died abroad, asserts that the Russo-Japanese War “is not a battle between Japan and Russia. It is a war between races.” Port Arthur was conquered by the Japanese in a day with no casualties during the First Sino-Japanese War, which was a war amongst the same race; in the Russo-Japanese War, which was a war between the yellow race and the white race, the Siege of Port Arthur resulted in 130 days of battle and a great number of casualties.

Race is differentiated by skin color 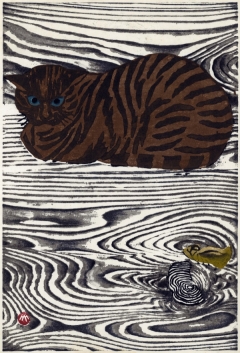 “Neko” (Cat) by Susumu Yamaguchi (1958). There are other cat-themed works by Yamaguchi that are kept in the Komaba Museum

Race is differentiated by the color of the skin. When Natsume Soseki was studying abroad in London, he internalized the discriminatory gaze of British people. In his private correspondence addressed to Masaoka Shiki titled “London Shosoku” (Letters from London) which appeared in Hototogisu (1901, 2 issues), Natsume Soseki said the following about his own skin color.

... “We yellow people” – “yellow people” is a well-chosen description. We are indeed yellow. I’m not necessarily on the pale side when I am in Japan, but I previously regarded myself to be close to the general human skin color. However, I eventually realized that I must come to the conclusion that in this country, yellow is not considered a normal skin color at all.

One of the main factors leading to the onset of the Russo-Japanese War was the Yellow Peril, where the Russians were cautious of the “yellow”-skinned Japanese people advancing into the world. We must not forget that the Yellow Peril was central in the final stages of the war, when the German Emperor Wilhelm II insisted on the threat of the yellow race and incited Nicholas II of Russia who disliked Japan (as he bitterly recalled the Otsu incident) to carry out the Triple Intervention. Since then, the Empire of Japan made it their motto to endure hardship for the sake of vengeance and pumped the vast amount of reparations acquired from the First Sino-Japanese War into the military, charging forward into the outbreak of the Russo-Japanese War. The fur colors of the cats in I am a Cat evoke the relationship between this series of imperialistic wars and racial discrimination based on skin color.