Expanding upon the harmonized chequered pattern of the Tokyo 2020 emblems


Expanding upon the harmonized chequered pattern of the Tokyo 2020 emblems
The Olympics emblem designer, an origami engineer and Komaba Campus students work together on exercises in art production 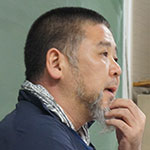 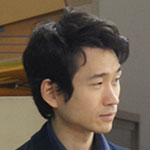 Tokyo 2020 Olympic and Paralympic emblems designer Asao Tokolo teaches the course “Individual and group: crest pattern design” at the College of Arts and Sciences. This is an intensive five-day course with classes that extend over four hours each, and involves enrolled first- and second-year students in exercises in art production.

The faculty member in charge is Associate Professor Tomohiro Tachi, who is affiliated with the Art Center, the University of Tokyo (ACUT) and is a scholar engaged in the study of origami engineering. The class itself came into being through Tachi’s involvement in a private exhibition by Tokolo. Tokolo had come up with a variety of patterns that built on the “connect” theme, including the pattern used in the Tokyo 2020 emblems. Tachi was one of the individuals who collaborated with Tokolo on his 2017 “CONNECT” exhibition of artworks produced by 10 guest artists inspired by Tokolo’s designs.

The class first has a lecture by Tokolo on models of the “harmonized chequered emblem” pattern that tied together his thoughts on the two emblems and their geometrically intriguing features. The key words are “individuals, groups and rules.” The underlying message is diversity with harmony.

“When individuals gather, they form a group. Rules define the ways they come together. Although rules tend to be thought of as inconvenient arrangements that impose certain restrictions or obligations, the field of sports would not exist without rules. In soccer, for example, the players are bound to the rule that they not touch the ball with their hands; in rugby, the players are prohibited from making forward passes. But such rules are precisely one of the reasons why these sports are so appealing.”

Likewise, haiku poems must follow a 5-7-5 syllable format. That rule boosts their potential for creative expression. We also have rules regarding melody and rhythm, and such rules enable us to create music instead of purely random streams of sound. One could also say that diverse individuals apply rules when they gather and form groups. This system resonates with the ideals behind the Olympic and Paralympic Games, where individuals connect while also fostering the mutual recognition of differences, creating spaces that generate harmony.

The patterns for both of the Tokyo 2020 emblems are based on 45 individual diamond shapes of three different types. Simply changing the position of the diamond shapes transforms the Olympic emblem into the Paralympic emblem, and vice versa. Even though all the individual pieces remain the same, applying a different pattern rule for their arrangement creates a different emblem, or group. “Simply put, this class is an exercise to see what kind of groups will emerge when different rules are applied,” Tokolo explains.

Participating students are assigned homework after each lecture. The artworks they produce are reviewed by a panel of lecturers including guests during subsequent class sessions. They then utilize the feedback they received to refine their creations for review by the panel at the final class session. Participants in Tokolo’s 2018 course were assigned the task of creating artworks utilizing the 30-, 60-, and 90-degree angles included in the three types of diamond shapes that form the basic pattern for the Olympic and Paralympic emblems. And, as expected, the students brought back a collection of intriguing works (photos below) for the final panel review, which was held at the Komaba Museum. “From a research perspective, their creations were quite inspirational. And of those, two in particular led to a research paper, co-authored by several investigators including Mr. Tokolo and me,” notes Tachi.

Computations revealed that dividing the same silhouette pattern used in the Paralympic emblem into diamond-shaped patterns had approximately 3.36 million possible variations. Additionally, if one applies rules for different coloring schemes, it is not at all easy to count the total number of variations possible. Tokolo states: “I think it would be possible to allocate a unique emblem to each of the world's 7.3 billion citizens.” This amazing emblem pattern may serve to bring the world closer together long after the 2020 Olympic Games have concluded.

Selection of exhibits submitted to the final review panel

** This article was originally printed in Tansei 40 (Japanese language only). All information in this article is as of March 2020.