Going with the flow at UTokyo | Discover Our People

A Los Angeles, California, native with a passion for nature, Destiny Johnson studied environmental science during her undergraduate years at the University of California, Los Angeles (UCLA). Through her time at UCLA, working at an environmental organization, and as a student in the UTokyo Summer Internship Program (UTSIP), she honed her research interests, coming to focus on groundwater. Her research as a master’s degree student at UTokyo’s Graduate School of Frontier Sciences concerns unraveling the mysteries of the Shiokawa, a river in the southern Japanese island of Okinawa known for having an unusually high saline content. “No one knows why, so I thought it would be interesting to look into that,” she explains.

Testing the waters of research and studying in Japan 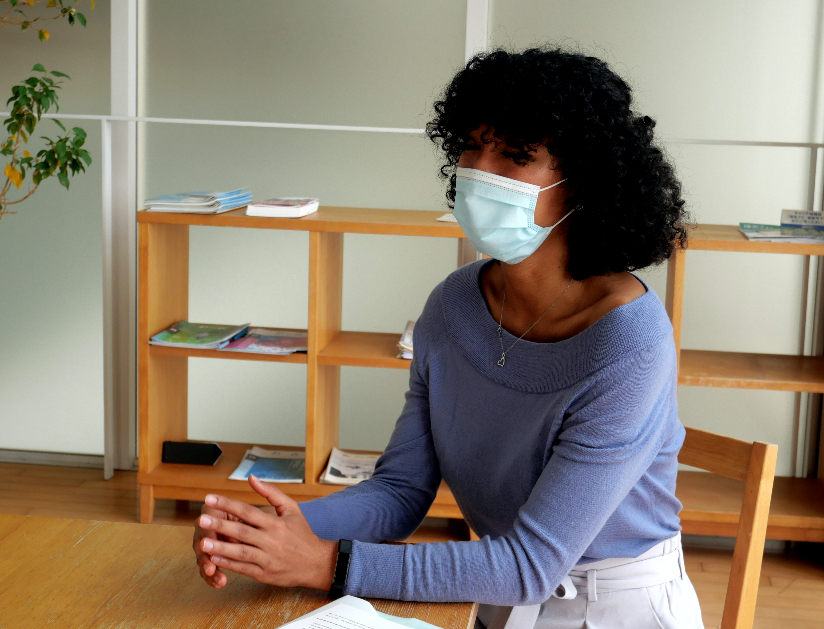 As an undergraduate student majoring in environmental science at UCLA, Destiny decided early on to go into either the atmospheric or oceanic science area of her chosen field. A senior year group project through which she paired up with a nonprofit organization that works to protect local coastal waters and watersheds convinced her to pursue studying oceanic science, or more generally, water.

“Graduate school was always on the horizon; it was just a matter of when I wanted to go,” Destiny says. After graduating from UCLA, she took a gap year and started a 10-month fellowship as an engagement coordinator for a local climate outreach organization. At that time, she decided to further her studies once she finished her fellowship, so she began preparing her MEXT (Japanese Ministry of Education, Culture, Sports, Science and Technology) scholarship application for graduate school at the University of Tokyo. But why did she want to study in Japan, and at UTokyo specifically?

During Destiny’s junior year at UCLA, she had participated in the UTokyo Summer Internship Program (UTSIP), a six-week research program held at UTokyo’s Graduate School of Frontier Sciences on the Kashiwa Campus. Through this program, she studied supercritical water – a form of water that is concurrently liquid and gas – in the laboratory of Professor Yoshito Oshima. “I really, really enjoyed it,” Destiny reflects. “It was nothing but positive experiences for me, from being able to do lab work for the first time, to seeing what life was like for a grad student at UTokyo.”

Destiny also had personal reasons for participating in this internship. Her mother is Japanese, and she has family living in Tokyo. She often visited them during the summer, but UTSIP was her first time both coming to Japan alone, and staying for an extended amount of time. “It kind of pushed me to be a little more independent,” she says. “And because I had such a positive experience, I knew I wanted to come back to Japan to get my master’s degree.” She credits UTSIP as being a “huge influence” in her decision to further her studies at UTokyo.

After successfully obtaining the MEXT scholarship, Destiny returned to UTokyo in October 2019 as a research student for her first six months. Once again in the Oshima lab, she used this time to study for entrance exams to the graduate program, decide on a thesis topic, take Japanese classes and otherwise prepare for life as a graduate student.

It was also during this time that Destiny had a change of interest. Wanting to do more fieldwork, she opted to join a different lab, headed by Professor Tomochika Tokunaga. “I wanted to be inside and outside and have that good balance,” she explains. There, she shifted her attention to groundwater, which is water underground that can come to the surface through sources such as springs. 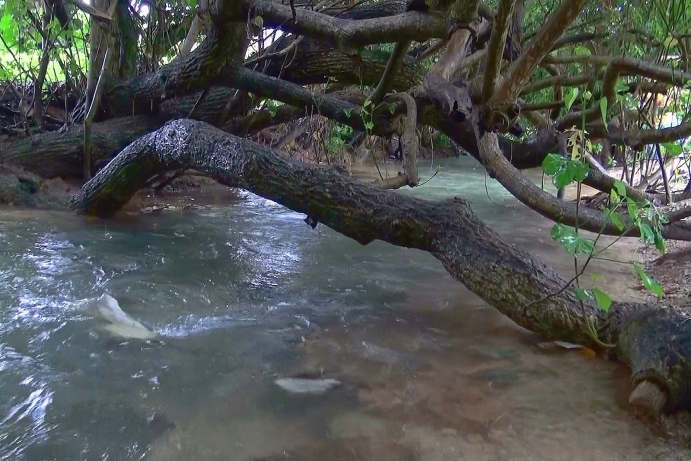 The Shiokawa, which has been designated as a National Natural Monument, is the only saltwater river in Japan. Photo: さかおり, Shiokawa of the Japanese natural monument, CC BY-SA 3.0

Prompted by a paper on the subject that her professor shared in one of her lab’s weekly seminars, Destiny became intrigued by the Shiokawa, a river in Okinawa with an unusually high saline content. Unlike most rivers, the spring of the Shiokawa, whose name translates to “salt river,” discharges brackish, or salty, water that is about one-fifth the salinity of the ocean. “I thought it would be something cool to do my thesis on, because it’s an interesting mechanism that doesn’t really happen throughout the world,” she says. In fact, the Shiokawa is the only saltwater river in Japan and one of only a handful worldwide.

In addition to researching why the river is so salty, Destiny is looking into why the discharge point is above sea level. “Because saltwater is denser than freshwater,” she explains, “it is interesting that it is able to go above the level of the sea water, when it should sink.” Also, little is known about the geology and topography of the entire watershed surrounding the river, so she has been exploring the area and discovering other rivers that could be used as comparisons to the Shiokawa. Since her research takes on multiple approaches, she admits that her focus may shift again. “I think the more I progress with my research, it’s open to change. I don’t know if I’ll still be focusing on the Shiokawa river, or the whole area in general.”

Together with her professor and a lab technician, Destiny has already gone to Okinawa twice to do fieldwork on the Shiokawa. During these visits, they collect water samples and analyze them later at the lab for attributes such as pH, to measure alkali or acid concentration, and electrical conductivity. Her on-site research also includes measuring the water level, the speed of the river flow, and walking around to confirm the geology of the area.

A considerable amount of Okinawan interest and support bolsters Destiny’s fieldwork. She and her colleagues coordinate with the local branch of an engineering company to conduct the research, and they also receive cooperation from a cement company that allows them to take water samples from its land. “It doesn’t just feel like something I’m personally doing research on, but also a rather large-scale project that a lot of people are involved in, which is pretty cool,” she reflects. People who live nearby and happen to see Destiny and her colleagues working are also curious about the research activities, and once she explains the research to them, they ask to be kept updated or wish her luck. “They’re genuinely interested, which is so awesome to see,” she says. 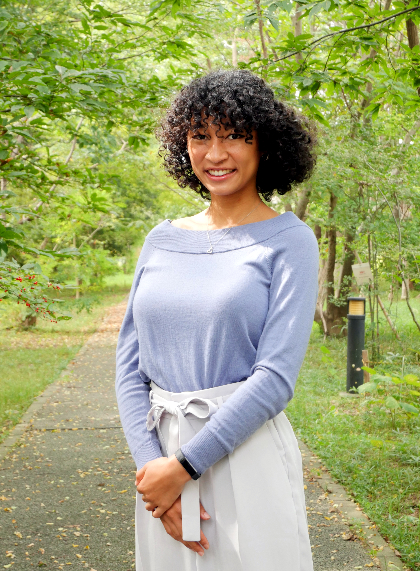 Destiny in a forested area on Kashiwa Campus. She describes herself as a “total tree-hugger” who thrives in nature.

Besides carrying out fieldwork and her research, Destiny attends a weekly seminar with members of her lab. The purpose of the seminar, which is conducted mainly in English, is for members to share progress on each other’s research. Along with Tokunaga and staff, there are over 20 people in the lab, including PhD, master’s degree and bachelor’s degree students as well as postdoctoral researchers, and about half of them are from countries such as India, China, Russia and the Philippines. “What I really like about my lab is that it’s very diverse,” Destiny says.

She also takes a number of classes, with titles such as “Environmental Systems Analysis,” “Sediment Transport in the Hydrosphere” and “Geo-disaster Mitigation Engineering.” When it comes to class selection, her focus is twofold. “I do try to take classes that are relevant to my research, but I’m also thinking from a perspective of the future and what would benefit me educationally when pursuing the career of my optimal dreams,” she says. That ideal career is one in geotechnical engineering, a civil engineering field specializing in soil, water and other geological materials. She particularly wants to work for a company that does work on groundwater systems.

Due to the coronavirus pandemic, classes are held mostly online, and lab events, such as an annual excursion, have been canceled. “Not having that human interaction is just really unfortunate,” she laments. With regard to being able to conduct fieldwork, however, she considers herself fortunate. “Luckily for me, our counterparts and our contacts in Okinawa are open to hosting us. Even though [the pandemic] has affected my research, it hasn’t affected it to the most negative extent.”

Whether it’s navigating the streams of her research or the streets of Tokyo, Destiny is always on the move. Since coming to UTokyo, she has lived in three places – first in the Kashiwa Lodge, which is student housing near campus, and later in apartments in two Tokyo neighborhoods. She is now considering moving again. “Despite the hassle that comes from moving around a lot, I do enjoy the fact that I’m experiencing so many different areas of Japan. I don’t get bored,” she laughs. In her free time, she also keeps active by hiking and practicing hip-hop dancing.

An environmental enthusiast with the curiosity to explore both the mysterious mechanisms of waterways and the inner workings of Tokyo, Destiny’s philosophy on life may best be represented by her favorite kanji character, 福 (fuku). This character holds significance to her not only because it is part of her mother’s maiden name, but also because of its meaning. “It means good fortune, something optimistic and happy, and you can never have too much positivity,” she says. Surely, Destiny’s positivity will aid her in charting her course at UTokyo and beyond. 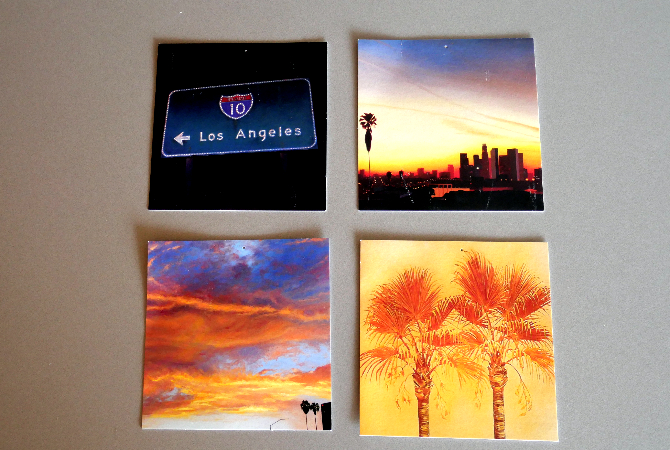 Cards from an art complex provide reminders of home

Destiny picked these four cards up at the Bergamot Station Arts Center, an art complex in Santa Monica, California. At the time, the complex was holding an exhibition on things that represent Los Angeles, and these cards featured prints painted by local artists of typical Los Angeles scenes such as palm trees, skyscrapers and a sign for the 10 Freeway. She says she displays them on the wall of her Tokyo apartment, “just as a little memento and a reminder that home is home.” 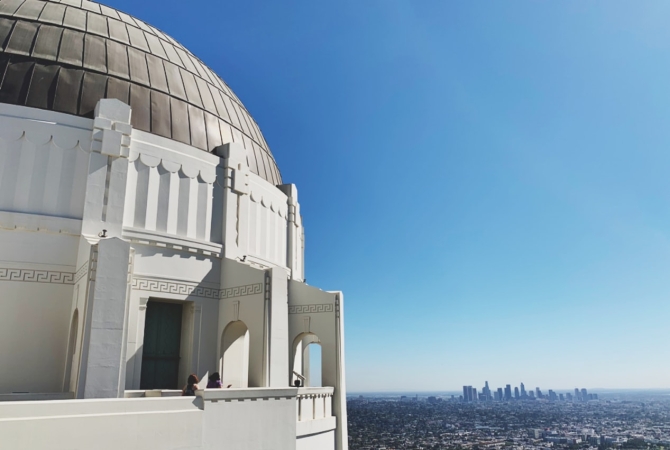 One of Destiny’s favorite places in her hometown is Griffith Park, an expansive municipal park in the mountains of Los Angeles. Growing up, she often visited the park and had field trips there, so it has been a constant presence throughout her life. Destiny notes that Griffith Park has a good mix of things that she enjoys, including a hiking trail, an observatory and a planetarium. “I just really like the vibe there,” she says. Many movies and shows she likes have featured this park, making it hold an even greater significance to her. Whenever a friend is visiting Los Angeles for the first time, she always takes them there. And best of all, she adds, it’s free!