Uncovering the effort behind “baby talk” What surprising truth does “Rumegamuwatteiruyo” reveal?

Uncovering the effort behind “baby talk”

What surprising truth does “Rumegamuwatteiruyo” reveal? 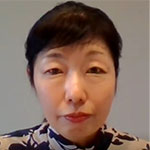 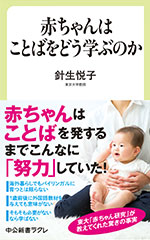 Adults who struggle with foreign languages tend to grumble with envy, saying, “If I had lived abroad in my childhood, I would have become bilingual easily.” But, from the viewpoint of developmental psychology, Professor Etsuko Haryu of the Graduate School of Education sharply points out that that is actually not the case. In this article, the professor introduces some aspects of the language acquisition process that she has uncovered with many baby researchers.

Children speak their first words when they are nearly one year old. And when they approach two years old, they also start speaking in short sentences, connecting two or so words. Their growth is impressive, but the pace is not necessarily fast. For an adult, being unable to speak a foreign language word for a whole year despite taking special language training, or taking two years to say a sentence, would be unbelievable.

If you think about it carefully, babies are in a situation where no one explains a language to them, so they have to discover the words, their meanings and grammar on their own. There must be a lot of effort involved.

However, babies will not tell you what kind of effort it is and what they are doing. Therefore, methods for examining their efforts have been developed. For example, in the habituation-dishabituation method, the same stimulus (sound or image) is presented to a baby repeatedly. When the baby becomes bored and pays less attention to it, the stimulus is changed to something slightly different. If the baby notices this change, especially if the change is something unexpected, he or she will be surprised and pay attention again to the stimulus (dishabituation). By looking at whether or not the baby dishabituates, we can examine what kind of changes babies can notice and what changes they find unexpected.

We used this method to examine if a baby was able to hear postpositional particles (admittedly a somewhat extreme purpose). Our speech is a seamless stream of sounds, so finding a “word” (a certain chunk of sound) is a big challenge for babies. Particles such as “ga” and “wo” are used between words, so if babies can understand them, they would be able to do this task easily. That’s why we focused on particles.

To find out, we observed the reaction of 15-month-old babies to certain phrases. We first had a baby listen to the phrase, “Rumegamuwatteiruyo,” until the baby got bored, and then played slightly modified phrases such as “Rumemuwatteiruyo” and “Rumekimuwatteiruyo.” (We used meaningless words such as “rume” and “muwatteiru” because if we use actual words, some babies may or may not already know them.) The over one-year-old babies reacted when “ga” was replaced with “ki,” but were not surprised when “ga” was dropped. Moreover, they reacted when words other than postpositional particles were dropped, so it seems that they only ignore when the particle sound is dropped. This could mean that babies are already able to catch the particle “ga” at the age of a little over a year, and they know that it is okay to omit it.

Babies don’t say much, but their efforts cannot be underestimated.