Cognitive development and individuality based on the predictive brain 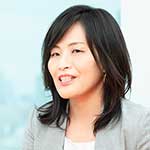 How do humans acquire intelligence? A promising approach to addressing this ultimate question is to build robots that develop and learn like humans. This approach, called cognitive developmental robotics, aims to understand human intelligence by designing intelligent robots. Yukie Nagai, project professor at the International Research Center for Neurointelligence (established in 2017), who works to elucidate the principle behind the human brain as a “predictive machine,” provides an insight into this field.

We have been studying the mechanisms of human cognitive development by using artificial neural networks that simulate the human brain as well as robots that interact with the environment based on these networks (Figure 1). The human brain is suggested to be “a predictive machine.” The brain does not perceive sensory signals such as visual and auditory signals as they are. Instead, the brain predicts sensory signals using internal models based on past experiences and knowledge and integrates the predicted signals with incoming sensory signals to perceive the world. Some of the optical illusions, for example, which you may have experienced, are thought to be caused by this predictive function in the brain. That is, the brain distorts our perception.

However, the effects of prediction are not limited to such negative ones. The prediction ability enables people to imagine a whole picture from a partially observable object and to guess other persons’ internal states (i.e., intention and emotion) from their facial expressions and behaviors. It also determines how to react to objects or other persons. For example, people can sit on a chair by producing an appropriate action to the object and help others by reading their intention owing to the ability of prediction.

We have been investigating when this prediction ability is acquired and how it varies among individuals by comparing experiments using robots with those involving children. We designed a representational drawing task, which is popular among children, to examine the ability to estimate and complete missing parts in pictures.

Our experimental results demonstrated that only robots that acquired the well-balanced top-down predictions and bottom-up sensations were able to complete pictures like older children (Figure 2). In contrast, weakening or strengthening the prediction ability resulted in different drawing behaviors. The robots scribbled when their predictive function was immature, whereas they repeated drawing the same picture regardless of the presented picture when their prediction ability was excessive. Similar drawing behaviors were observed in younger children with different individualities. These results suggest that cognitive development in humans is considered as a process to acquire the prediction ability, and that different balances between top-down predictions and bottom-up sensations lead to individual diversities.

We can extend this idea to uncover the potential causes for developmental disorders such as autism spectrum disorders (ASD). People with ASD often suffer not only from social communication difficulties, but also from hyperesthesia to visual and auditory stimuli. It has been suggested that hyperesthesia is caused by an imbalance in the predictive function of the brain. We aim to understand what causes hyperesthesia and how perceptual differences affect behavior by designing wearable simulators and artificial neural networks that reproduce hyper- and hypo-esthesia in ASD (Figure 3).

Our ultimate goals are to understand the principle of human intelligence and thus to contribute to a design for a neurodiverse society.

* This article was originally printed in Tansei 42 (Japanese language only). All information in this article is as of March 2021.