The president’s lab, dedicated to the ocean From underwater robots to the democratization of oceanographic observation

The year 2021 marks the start of the United Nations Decade of Ocean Science for Sustainable Development, a major campaign to advance the science of the ocean, which is the birthplace of all life and sustains the lives of organisms on Earth. This year, the University of Tokyo welcomed as its new president a scientist who has lived and worked with the ocean. From engineering, physics and biology to agriculture, law and economics, we introduce UTokyo’s ocean research and marine education activities as illustrated by examples from various fields.
From underwater robots to the democratization of oceanographic observation

The president’s lab, dedicated to the ocean

The University of Tokyo’s President Teruo Fujii made his way as an engineer mainly specializing in the ocean, ranging from the exploration and observation of deep seas and other oceans from an engineering standpoint to the research and development of applied microfluidic devices. Project Research Associate Haruyuki Kinoshita of the Institute of Industrial Science, who has been a longstanding member of the president's 20-year-old laboratory since 2006, talked to us about the research efforts pursued by the president and his laboratory. 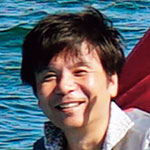 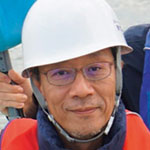 President Fujii said he was deeply inspired watching Apollo 11 touch down on the Moon on TV when he was a child. While exploration of the Moon has progressed since then, he became fascinated with another “unknown” world, that of the deep seas, and decided to pursue the area of ocean engineering. Whereas the mainstream method of oceanic research has been to go out on a research vessel, collect water samples and bring them back for study, Fujii has adopted a slightly different approach, which involves transporting equipment to the deep sea by an underwater vehicle and studying the ocean on site.

“Bringing samples back to a place with different water pressure and temperature tends to change the condition of the samples, but we don't have to worry about this if we can analyze them at the site where they were collected. Doing so also provides the benefit of being able to move on to the next survey point immediately based on the analysis results. For example, if a water body has a high manganese ion content, detailed investigation of the surrounding area may reveal hydrothermal activity,” said Kinoshita.

In fact, the Fujii Laboratory discovered new hydrothermal activity off the coast of Okinawa in 2010. The quantitative manganese ion analyzer mounted on a remotely operated vehicle was instrumental in this discovery. The analyzer is designed to detect manganese ions with a sensor by adding a reagent to seawater collected at a deep-sea site to cause a chemiluminescent reaction. At the heart of the system is a microfluidic device, which was conceived by Fujii when he was working at RIKEN. The device is capable of manipulating trace amounts of liquid in microchannels. In the world of a few hundred microns, surface tension and viscous forces act more strongly than inertial and gravitational forces, enabling fluid manipulation that would otherwise be difficult to achieve on a macroscopic scale. The conventional fluid manipulation was mainly done by carving fine grooves into glass, but it turned out that flow channels could be mass-produced inexpensively using molds with microstructures and silicone rubber. This was when a new trend of microfluidic devices began to sweep across the world.

“The smaller the device, the better when it comes to transporting probes to the deep sea, which is an extreme environment. Fujii was very insightful in focusing on the deep sea to apply microfluidic devices,” said Kinoshita.

While developing devices to detect genes in microorganisms and ATP analyzers to observe traces of living organisms, the Fujii Laboratory began to apply its research to the biomedical field with the arrival of a French researcher in the laboratory. For example, they used microfluidic devices to culture cells. Unlike petri dishes, microfluidic devices allow partial manipulation in terms of time and space, which is a major advantage in being able to freely control the cell culture environment. Medical-engineering collaborations eventually grew into one of the pillars of the laboratory's deep-sea expertise in fluid control, including pumps and valves. 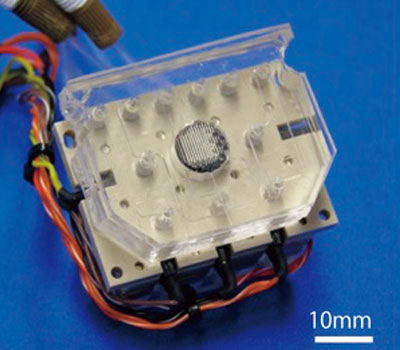 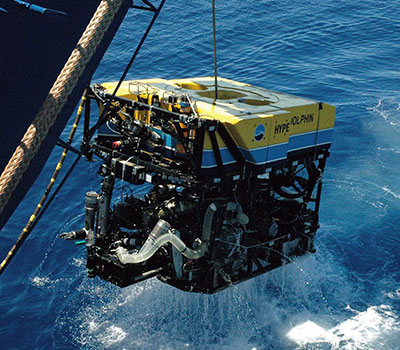 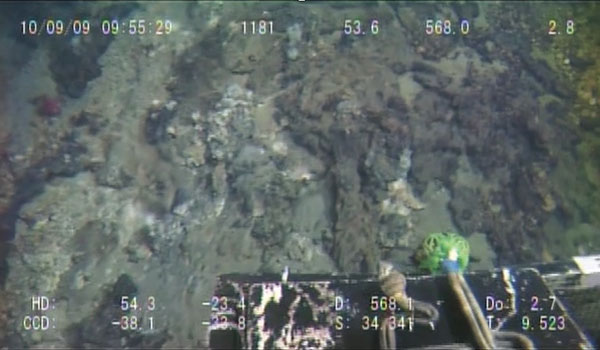 Enabling everyone to gather and share information about the ocean

A new initiative that Fujii embarked on before assuming the position of president was the Ocean Monitoring Network Initiative (OMNI). OMNI is an open-source project that aims to collect and utilize data from the vast ocean by building observation equipment using readily available components. Covering about 70% of the earth’s surface, oceans harbor the keys to solving various challenges facing humanity, such as climate change and issues involving food and natural resources, but only about 5% of the total ocean area has been explored in detail.

“To collect enough oceanographic data, it is not enough for experts to work alone. We need to expand the scope of ocean observation from researchers to the public, or in Fujii’s words, ‘democratize ocean observation,’” said Kinoshita.

The journey began around 2016. Fujii, who was involved in the reform of the Institute of Industrial Science as its director, recognized the importance of design through repeated dialogues, and launched the Design Lab in collaboration with the Royal College of Art (RCA), a renowned London-based art institution. The mission was to create new things through dialogue between designers and researchers, sharing common questions from a blank slate.

First, the designers toured all laboratories in the Institute to find out what technologies were available. They gained an overview of all the technologies they had collected after writing them down, which inspired the designers to come up with ideas on ways to combine them, prompting the launch of many projects. OMNI was born from a combination of the lineage of observation using underwater robots that Fujii had worked on in his youth with his mentor, Professor Tamaki Ura, with the essence of designers who think in terms of needs. 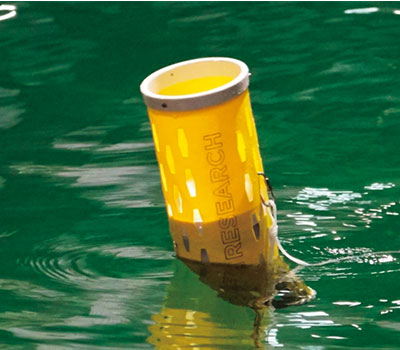 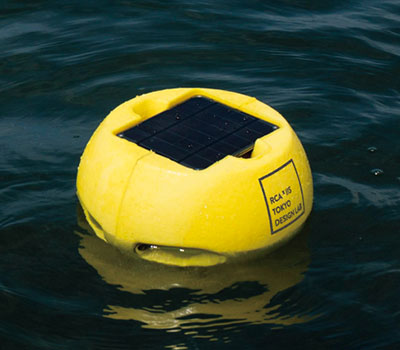 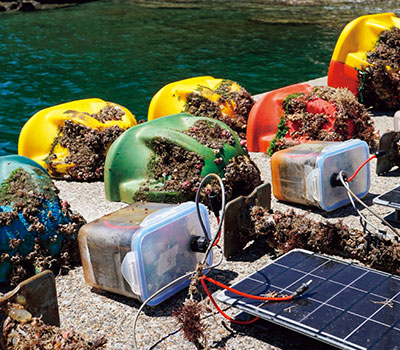 It took about six months to build the third-generation observation device, which marked a milestone in the development process. They loaded electronic circuits into a waterproof plastic container sold at a 100-yen store, and attached a GPS board, temperature sensor, salinity sensor, solar panel and communication antenna to a urethane float and support pole, creating a large soccer ball-sized observation device for about 40,000 yen. It is much easier to make than conventional devices, and anyone with a kit can assemble it. Although its functions are limited, when they tested it in the ocean around Misaki in Kanagawa Prefecture for three months, it collected data without any problems. The data was displayed on the web in real time via a base station.

“Of course, there have been challenges. Solar recharging limits the amount of power available, and mounting a camera is still difficult. The sensor loses accuracy when algae, etc., attach to it, so burdensome adjustments are necessary. But that’s fine. We can only solve any single challenge when it arises,” said Kinoshita.

Along with improving the technology, the team focused on holding workshops and discussions with various people. Team members went to a school in Zushi, Kanagawa Prefecture and talked with junior and senior high school students. They visited a cafe in Shibuya, Tokyo and spoke with creators. They went to a startup support center in Kamakura, also in Kanagawa, and chatted with the locals. They even went online to talk with elementary school students. Lifeguards wanted to know about the water temperature at the beach, while fishermen wanted information about the water temperature in the deep part of the ocean. This is because the difference in water temperature between the surface layer and the deeper layer affects the habits and behavior of fish. Divers guiding guests wanted to know the transparency of the water. Knowing the water clarity beforehand is helpful in determining the best place to dive at a particular time of day. On an island, people said they wanted to measure nitrogen and phosphorus concentrations to show that factory wastewater meets environmental standards.

“Showing actual examples is crucial to begin with. By having people become familiar with our equipment, we have been able to uncover more and more needs in the community. Most researchers tend to focus on the most advanced technologies, but there are cases where it is better to use technologies that are reliably affordable. We believe that innovation starts with the combination of such technologies,” said Kinoshita.

What do oceans and wine-producing regions have in common?

Fujii, who headed the marine research group of the Engineering Academy of Japan until the end of last fiscal year, put together a vision for a “ocean terroir” to learn about oceans and explore new resources, proposing it in March 2021. The French word “terroir” refers to the unique characteristics of a wine production area, including its climate, soil and history. The concept behind this is that, like land, each sea in a region possesses the power to create value, and in order to extract that value, the oceans must be understood well.

“OMNI is one such endeavor. With this vision at root, both researchers in cutting-edge technologies and non-researchers will find it easier to come together. We believe that our mission is to create a venue for everyone to share questions and exchange ideas rather than to present our own ideas, and we will continue our efforts to expand the OMNI community,” said Kinoshita.

This year marks Fujii’s inauguration as president of the University of Tokyo as well as the beginning of the U.N. Decade of Ocean Science for Sustainable Development. The time has come for scientists, designers, the public and UTokyo alike to deepen our involvement in the ocean as a global commons.