Movie recommended by a geophysicist Nippon Chinbotsu (Submersion of Japan)

Movie recommended by a geophysicist 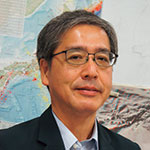 A great thought experiment that piques one’s interest in seismology

I was in junior high school when I first saw this movie. I also read the novel by Sakyo Komatsu on which it was based and was suffused with a burning ambition. But it wasn’t until university that I heard of geophysics. My supervisor, Seiya Uyeda, was a leading expert on plate tectonics. I remember the excitement when I learned that plate tectonics are the cause of Japan’s frequent earthquakes. I watched the 2006 version of the movie onboard the Chikyu scientific drilling ship while it was at sea. The plot involved burying a nuclear bomb underground to break up the tectonic plate and prevent Japan from being submerged, with the Chikyu ship playing a major role. Later, in 2021, there was a television version, which was a bit like the movie Shin Godzilla (Godzilla Resurgence). Of the three, I thought the best portrayal of the Japanese prime minister was by Tetsuro Tamba in the original 1973 movie.

In each of the three versions, the mechanism by which Japan is submerged differs. In the 1973 movie, the cause is convection cells in the Earth’s mantle. This is based on Chandrasekhar’s theory, which states that changes in the patterns of convection cells cause locations of the trench to shift. In the 2006 version, the issue was “delamination,” whereby the underside of the Earth’s crust detaches and sinks toward the planet’s center. In the 2021 version, the key causes were global warming, and “slow slip” earthquakes, whereby the cohesion between plates loosens and they shift very gradually. In fact, this phenomenon was discovered around 20 years ago by the Earthquake Research Institute’s Professor Kazushige Obara. Because these earthquakes are extremely slow-moving, they’re undetectable using regular seismometers, and it was thanks to Japan’s outstanding observational network that they were discovered. In recent years, observation of slow slipping has improved worldwide, and the phenomenon has come to be seen as a clue for understanding why major earthquakes occur. The movies show how the science evolved from one era to the next. From a specialist perspective, slow slip earthquakes are just one example of a phenomenon known collectively as “slow earthquakes,” but thanks to the 2021 version of this movie, slow slip earthquakes became familiar to the general public. As such, it was an important contribution from an earthquake research standpoint.

Scientifically speaking, it would be impossible for the Japanese archipelago to sink in a year or two, but the attraction of movies is that you can just enjoy this scenario as fiction and separate from reality. Nippon Chinbotsu is a great thought experiment. As a citizen, it’s interesting to think about what one would do if one’s Japanese identity came under threat. We can also see how the depiction of natural disasters and post-disaster response meetings has evolved. If an updated version comes out in 20 years’ time, it will probably include more new knowledge. The network of optical fibers using submarine cables is advancing, and we are getting closer to being able to measure the distortion of fibers that expand and contract very slightly in response to movements in the Earth’s crust. If we make use of this, we may be able to detect slow slip earthquakes without seismometers being installed. The idea would be to turn the cables themselves into sensors. From my point of view, this movie is a masterpiece that encourages us to imagine a world in which we have “tectonic forecasts” similar to our current weather forecasts.